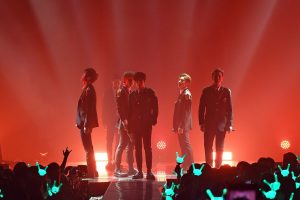 As the finale to their ‘Limited’ tour, B.A.P performed two concerts on the 21st and 22nd of July. Having been almost a year since their last Seoul concert, and half a year since their last Korean promotions, the concerts were highly anticipated by Korean and international fans alike. As an international fan myself who had the luck to be in Seoul during the concerts and to finally see the group I’ve been a fan of for more than six years, I could certainly feel the audience’s excitement as we waited for the show to begin.

There was a touch of nostalgia too, as with the members’ 7-year contracts with TS Entertainment drawing to a close in a few months, and Yongguk and Himchan’s mandatory military service looming on the horizon, fans were unsure if this would be the last B.A.P concert for a while. Yet despite any nervous fears, B.A.P made sure to gift their fans with what they had missed for so long: hours of fun, a mixture of wonderful performances, and proof of the group’s versatility and growth over the years.

The concert began with the group’s iconic earlier songs, beginning with their debut song “Warrior”, then “Power”, “One Shot” and “No Mercy”, with fans enthusiastically recreating the unique Matoki whistle fanchant. B.A.P then moved on to their more feel-good songs “Stop It” and “Crash”, before mellowing down again with “Coffee Shop” and “Rain Sound”. The accompaniment of a live band (consisting of a drummer, guitarist, DJ and bassist) added a dash of energy to the show, especially with their extended ending to B.A.P’s breakthrough song “1004”, taking the time to show off each individual member of the band. 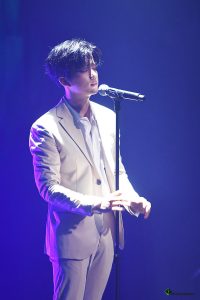 After such a strong beginning, there was a clear contrast when the lights dimmed and the spotlight focused on Youngjae for his self-made solo song, which he had teased on a previous V Live. Showcasing his baritone vocals but also his falsettos, the ballad demonstrated Youngjae’s unique vocal place in the group and gave both B.A.P and the audience time to catch their breaths.

After a VCR using “Monologue” came a powerful performance of “Young, Wild & Free”, their first comeback title song after returning from their hiatus in 2015. It was at this point where there was now a general shift from pre-lawsuit songs to more recent ones, wherein the audience could experience the trajectory of B.A.P’s music. For example, there is a noticeable improvement in the line distribution between the members, particularly with sub-vocal-turned-lead-vocal Jongup now taking up more challenging and impressive parts.

Previously, there would be five-to-ten-minute talks every few songs as the members introduced themselves, rested, or hyped the audience up. At this point, though, there was a longer segment. Several weeks before the concerts, B.A.P’s management had opened a poll on the fancafe for fans to vote for their favourite songs, out of which the top three would be performed. Now, as the screen revealed the top 20-11, and then top 10-4 voted songs, the members went through the list, talking about each song, singing a little of some, joking about forgetting the lyrics of others. 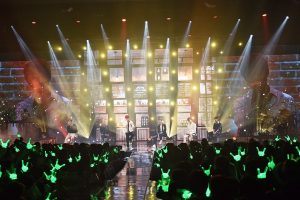 The top three songs were revealed directly through them being performed, a feat that greatly amazed the audience. Third was “Lovesick”: an interesting result, as the song itself doesn’t particularly stand out in the First Sensibility tracklist, but the lovable choreography and happy faces of the members feeling silly were what made the performance so warm and fun. Second was “Blind”, a particular fan favourite that had only been sung live once, back in 2015. The song had a familiar pre-hiatus structure, like that of “Coma”, that had grabbed fans’ attention right from the release of the highlight medley video before the album release: Yongguk and Zelo’s rap parts forming the verses, Himchan and Jongup following for the pre-chorus, and the chorus being sung by main vocals Daehyun and Youngjae. It was no shock then when the top fan-voted song turned out to be “Coma” itself, but it was excitedly received all the same. The notion of taking fan suggestions to make the concert even more of a gift for the fans was a real highlight of the concert, as the audience got to have a unique experience for this particular show. 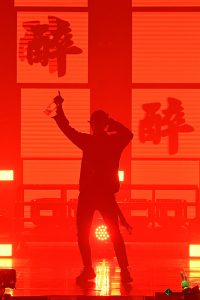 The next two songs were again self-written solos, this time by youngest member Zelo, and second-youngest Jongup. Zelo’s “Tylenol” had been previously uploaded on his SoundCloud, but the performance, in red lighting so strong that he was mostly a silhouette, was enchanting to say in the least. To see the growth from the 15-year-old known for his “LTE rap”, to a confident 21-year-old writing his own songs, experimenting with different genres and rap styles and even trying his hand at singing, was a moment of pride.

Jongup’s solo “짜증이나” (Annoyed), featuring several members of newer TS Entertainment group TRCNG as backup dancers and a rap from Zelo, had also been briefly teased in informally filmed dance practice videos on Jongup’s Instagram. The song, vastly different from his previous solo songs felt more in line with what might be expected from Jongup: energetic, boyish and carefree. With a full stage of dancers and a throwback high school concept, Jongup too showed how far B.A.P’s music ranges, especially when individual members have the chance to develop their own creativity.

The stage outfits then became flatteringly formal as the group performed “Skydive” and “Hands Up”, more recent releases that line up with what people are used to from B.A.P: heavy beats, freeing lyrics and a strong stage presence. After another quick outfit change, the group then moved on to fan favourites again , such as “Goodbye” and “B.A.B.Y”, before leaving the stage again. 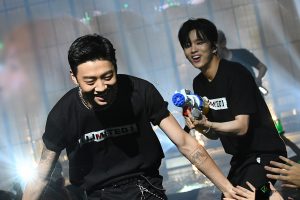 It was then that fans came together to sing B.A.P’s song to their fans “With You”, holding up banners that had been organised and handed out by fans before the show had begun. Being part of the Matoki ocean at this point was really something, especially when the B.A.P members jogged back on stage in the concert’s official t-shirts and joined in.

The encore performances were expectedly fun, as the members sang “Excuse Me” and “Bang x2” whilst thoroughly enjoying the stage, pelting each other with water guns and playfully interacting with fans. As most of the audience would be returning the next day, the first concert finished smoothly, and felt more like a halfway point than an end.

The second day of the concerts was the same as the first, with more time from the members’ speeches, most notably the speech before the encore in which they addressed the upcoming end of their contracts with TS Entertainment. The audience felt conflicted: while B.A.P said that this was so far the last concert that had been officially scheduled, and that they were still unsure of the future, they also emphasised their bond with each other, and with their fans.

Faced with the reality of how soon some of the members’ contracts will end, with Yongguk’s being less than two months away, it is natural for fans to feel worried about the group’s future prospects. Yet it is important to realise how easy it would have been for B.A.P to not mention the future at all, and to let the concert go by with purely joyful moments. Himchan even admitted that they weren’t sure if they should have brought the topic up, but that they wanted to be truthful to fans. 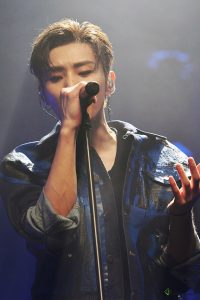 It is their honesty more than anything that proves B.A.P’s dedication to their identity as a group, and also to their fans, by not leaving them in the dark to hear the news later from official sources rather than the members themselves. Compared with the way B1A4 and BtoB addressed (or didn’t address) their futures over the last few months, B.A.P’s treatment of the topic leans more towards BtoB’s, and so at least gives hope for a possibility of future group activities.

With TS Entertainment’s continuous poor management and inability to pay both stars and staff properly, it is unlikely that the B.A.P members will choose to renew contracts, despite TS announcing that they are currently in talks. While it will certainly be difficult for all six members to secure the continuation of the group under a different agency, their attitude towards the issue, telling fans not to worry and to keep supporting and trusting them, at least provides consolation.

Yongguk and Himchan will have to leave for their military service soon too, so perhaps the next best situation could be the continuation of the group by the younger four members, either in group form or even as solo activities. Zelo has hinted at a mixtape since last year, Daehyun and Himchan have gained acting experience in theatrical roles, Yongguk has written many songs both for B.A.P and for others, and Jongup and Youngjae (as well as Daehyun) have worked on several solo songs. Any of the members will be more than capable of continuing a career in the limelight, and in more than one field, too. And if they are able to continue their individual careers whilst still officially continuing the name of B.A.P, then all the better — the unofficial group forged from hardships and friendships will most certainly persevere. 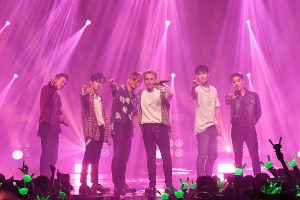 Either way, B.A.P themselves didn’t let any uncertainty stop them or the audience from enjoying the second night of the concerts. Lasting over three hours and including thirty performances, the second concert ended spectacularly.

No matter what the future holds, there is at least the dedication of the group and the fans alike to keep B.A.P going past whatever obstacles lay in their path.