T.S. Entertainment, which is the same company that houses Secret, finally debuted their new group B.A.P. (Best.Absolute.Perfect). Before the release of the new group, main rapper and leader Bang Yong-gook, featured in Song Ji-eun’s “Going Crazy” and his own solo track “I Remember” featuring Beast’s Yoseob. Late 2011, Bang Yong-gook and the group’s maknae Zelo released “Never Give Up” an upbeat song with elements of gospel mixed in. B.A.P had made an impression on the K-pop community and many were anticipating their debut, especially after their teaser. 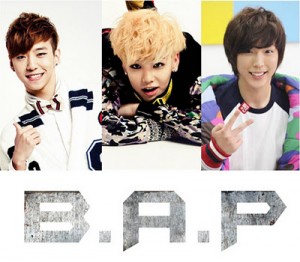 Their company has done well in marketing this team, they are featuring the boys with their own T.V. show Tadah It’s BAP and getting their name out there with the solo ventures of the team members. I stand by the fact that their name reminds me of bibimbap and I get hungry every time I think of their name. After seeing their teaser for “Warrior,” I was undeniably excited.  After an onslaught of happy-go-lucky songs about the woes of teenage love, I wanted something aggressive and badass, and B.A.P delivered with their debut “Warrior.”

If I ever go into battle, I will be blasting this song as I take down my enemies and I have already added this song to my “Saving the World from the Apocalypse” playlist. It’s that epic.  While the song itself is fairly aggressive with chants and heavy beats, the music video with the slow motion, strobe lights, and ghetto set amplify the song’s gritty and industrial concept. There is Bang Yong-gook’s aggressive rapping and Zelo’s fast rhymes which contrast nicely with the strong vocals lines of Dae-hyun. It’s very chaotic and frankly if you don’t like the fierceness it can get annoying to listen to, but I listen to metal so I’m a bit biased.

Warning: There are a lot of strobe lights, shaky camera shots, and badassery; for those with fragile dispositions, I would discourage you from watching in fear of an overdose of awesome.

The music video started out with a rabbit, or rather a person with a blinged out rabbit head. This music video in no way helped dissuade my irrational fear of the Easter Bunny. But then said bunny–I’m getting flashback of the carnivorous bunny from Monty Python– smashes the camera and it shatters revealing the members dancing.  The set of the music video is split between a street scene, which is eerily similar to 2NE1‘s “Fire” (street ver), and another where there is a giant robot with the creepy pimped out bunny DJ-ing with giant speakers behind the group members. What this music video does is take the music-video-in-the-box concept and runs with it. Obviously the set is fake, but what they do is fill the empty spaces with vandalized cars, dark decaying buildings in the background, and more graffiti. It fits with the concept of the song and I am not utterly bored with the room.

The effects used in this song are phenomenal. Slow motion is used effectively, amplifying the grandiose feel the song exudes.  The shaky shots of the members add to the ferocity especially that shot of Himchan behind the bars–he looked feral. 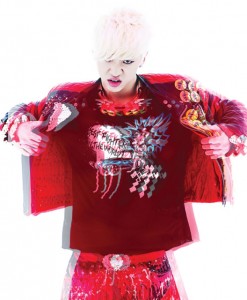 It is no doubt that the choreography is intense; there is a lot of punching, angry stepping, fake shooting, and falling dramatically to the floor. And the one element I loved about this music video is the stepping that comes in around 2:45. It was a unique aspect of the choreography and it fit in perfectly with the song, it was not out of place and only added to the urban feel. The boys brought the attitude needed to carry off the stepping. The militaristic whistles that was pervasive throughout the song was a nice touch furthering their industrial concept.

There are a lot of things happening at once: intense choreography, in-your face lines, slow motion mixed with shaky camera shots, and an abundance of flashing lights making the music video seem very chaotic.  I wouldn’t expect any less especially since the song itself is chaotic with the contrasting meldoies and raps. All they need to do is ditch the blonde concept because frankly it’s giving me a headache and I can’t distinguish any of the members from each other. They also have to stop making the members so young, I am lamenting at the fact that Zelo is two years younger than me. The song is definitely going to be banned because “The violent images displayed and promoted in this song is damaging to the youth.” There is a lot of fire, graffiti, and the complete destruction of cars via sledgehammer.

B.A.P came out with a very strong debut and an equally strong performance.  With the intense choreography, aggressive song, and well shot music video this rookie group did not dissapoint and I am definitely looking forward to their future ventures. What are your thoughts on this group? Do you like their concept or are you overwhelmed? Leave your comments below.