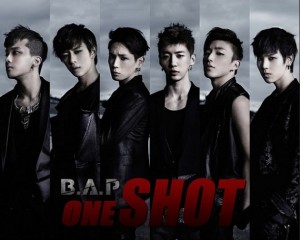 As my colleague Ambika said in her review of their latest album, it seems mildly ridiculous to talk about a B.A.P. comeback — the group has been so active since they debuted that it feels as though they’ve never left. Truth be told, their constant promoting has pretty much paid off; to say that it is difficult to make a name for yourself as a rookie group in today’s decidedly over-saturated K-popiverse is an understatement, and the fact that B.A.P. has amassed a large and loyal following in under a year speaks not only to their talent, but also to their dedication and hard work. B.A.P. may not always put out material that everyone loves, but they consistently win points for their strong execution and effort.

In 2013, however, B.A.P. seems to be breaking out the big guns in order to start the new year with a bang (both puns intended), as the release of their mini-album “One Shot” comes alongside the release of what is perhaps the most outlandishly expensive and ostentatious K-pop music video of all time. Yes, the video for “One Shot” (which I suppose milks the album for all it’s worth by including three different tracks within the seven — seven — minute long MV) cost TS Entertainment a whopping one billion KRW ( = ~$910,000, or nearly one million dollars) and was filmed on location across 100 hours in South Korea and the Philippines on ten different sets. Let’s recap the numbers: a cool million dollars + two countries + ten sets = seven minutes of B.A.P.

Was it worth it? Eh. Your mileage may vary, but let’s get to it, shall we? 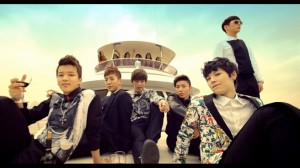 As though to slap viewers in the face with the utter ostentation of the whole enterprise, the music video starts off with the gentlemen of B.A.P. partying on a boat. Looking sharp in a set of crisp suits, they are pictured doing things that I suppose whoever directed this MV thinks rich people do on boats (I’m guessing he/she took inspiration from Lonely Island): eat grapes, drink wine (which, sorry Zelo, but you’re not even legally allowed to imbibe that), and look remarkably smug. Also present are the requisite dancing girls (can’t have a proper party without them). Strangely enough, this part of the MV, which is accompanied by the song “Punch,” lasts about 25 seconds, and has, quite literally, nothing in common with the rest of the MV. Big fans of 2PM‘s “Hands Up” might be disappointed that the entire seven minutes isn’t taken up by similar displays of opulence, but alas.

Somehow, we leap from the boat to an airfield, where the boys begin the next segment of the MV to “One Shot.” Dancing alongside planes, they kick it off with some of the worst English phrases I’ve heard in years (“You just get the rock to me, you n’aw mean?” Sorry, Yong-guk, I really don’t, but maybe I will if I “get my mind out fo’ the gutter”). We switch locations to a garage-esque setting where Yong-guk greets Jong-up, who is abruptly and unfortunately attacked by an iron rod-wielding thug. He throws a USB onto his crumpled form, which the rest of the boys (who are also, as becomes apparent, gangsters involved in some not-so-legal activity) watch with merited trepidation. For whatever reason, their homeboy Young-jae has been kidnapped by thugs that are demanding a ridiculous sum of $10,000,000 (in US dollars, to boot) for his safe return. It’s almost as outlandish as producing a million-dollar music video…oh, hey! Anyway, the boys develop a complex plan to get the money and execute it to solid results: to the tune of “Coma,” they rob a truck and manage to walk away with the money that they need for Young-jae’s ransom. Following a somewhat stilted return to “One Shot,” they finally meet Young-jae’s kidnappers face-to-face and seemingly pay the ransom; however, the thugs shoot and kill Young-jae anyway, resulting in a massive and graphic gunfight that leaves all the thugs and all of B.A.P. dead. Sad feels ensue. THE END. 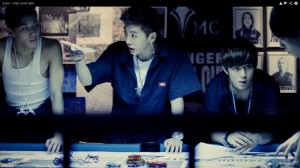 Just kidding. In a surprising twist, we rewind to an alternate ending in which “Coma” again plays and it is revealed that Young-jae has actually betrayed B.A.P. to the cops in what must have been a highly elaborate bit of undercover espionage. The boys sans Young-jae are presumably arrested as calamity ensues and Young-jae walks away. Sad feels ensue. THE END (for real this time).

Honestly speaking, even after having watched this MV a couple of times, I still do not really know what to make of it or how I’m supposed to feel. I do at least notice a modicum of image consistency here, which is great for B.A.P. as they establish themselves as a presence within the K-pop industry; they exude (best, absolute) power, a solidly masculine image, and put on a more-or-less convincing performance when it comes to acting. Their dancing is remarkably on point and the song fits the MV’s storyline well. Overall, it was a well-executed MV (save for the baffling boat part) and puts B.A.P. on good footing to continue their past successes into the new year. 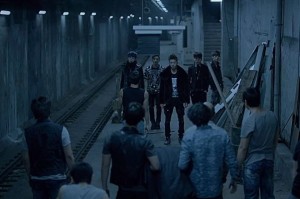 However, I have to say that the overwhelming sentiment I feel in relation to this MV is one of…well, being underwhelmed. It would seem that B.A.P. were going for an intensely dramatic video with this endeavor, and to that end, they’ve certainly created something that fits the bill; the alternate ending adds to the tide of emotions that viewers might feel as they recover from the shock of watching every single B.A.P. member get gunned down (seriously, was anyone else mildly horrified to watch this? I almost couldn’t look). That being said, though, I have to ask myself if this MV as it exists was really worth the somewhat unreasonable price tag. The gangster-gunfight trope is hardly underused in K-pop; in fact, there are an alarming number of music videos that feature more or less the same ideas and similar plot twists. Gun violence is becoming increasingly common (an interesting turn, given that guns are incredibly difficult to procure in South Korea/the US and other countries have reopened debates on gun ownership and its relationship to violent crime as of late), and while B.A.P.’s portrayal of themselves as a squad of boyish gangsters certainly works for the MV, it’s just…unoriginal. And this is compounded by the fact that so much money, time, and energy was expended to make it. In the end, it is no less compelling than were other gangster-themed MVs that probably cost a fraction of what TS Entertainment invested here. I certainly wasn’t bored by it, but I can’t say that it was the best, most exciting, or most unique MV I’ve ever seen — and I think that this lends credence to the idea that big budgets, ostentatious props, and oodles of special effects and CGI do not the best video necessarily make.