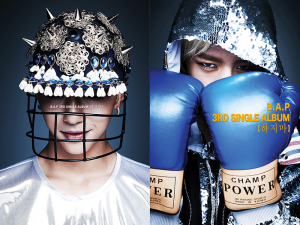 B.A.P exploded onto the scene this year with the ferocity of a “Warrior,” then they showed us their energy and “Power,” and for those who didn’t like it, they proudly exclaimed that there would be “No Mercy.” B.A.P’s trifecta of testosterone-driven, adrenaline-pumping, heart-racing battle songs came to a complete halt as mercy was granted for those who yearned for a lighter, gentler side of B.A.P. Their promotions for “Crash” hinted at a more down-to-earth side of the boys and also demonstrated that they were capable of a more diverse musical style. Then came the fighter-esque teaser images and the MV teaser for their new single which signaled a return to more masculine sensibilities. Albeit a more soulful sound than their previous releases, the intense rapping, the yelping ad-lib, the whistle noises, and the blond hair hinted at a transition back to their musical and visual roots. Along with the cool title, “Stop it” seemed like it would be a logical progression of their first three hits. To my utter disappointment surprise, it turned out to be this: 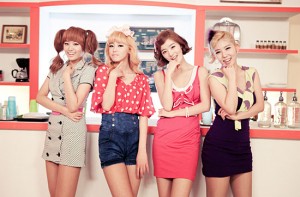 I should have seen it coming. It wasn’t the first time they’ve fooled me with a deceiving teaser. But before I jump into the negative implications behind the stylistic 180 that B.A.P has undergone, there are quite a few positives that are worth mentioning in this song and MV.

B.A.P is following a formula, one which TS Entertainment has blueprinted with the success of their girl group, Secret. Through their first three MVs, B.A.P has established an authentic sound and visual style that is significantly different from other K-pop acts. They have discovered their niche. Once a niche is established, a group has the freedom to explore a different sound and/or image as long as there is still a faint connection to the niche style (also known as the “Shy Boy” hypothesis). Not surprisingly, B.A.P got a little cute (quite literally) when they experimented with a softer sound and image in “Crash.” The result was more than spectacular as the not-as-heavily promoted follow-up to “No Mercy” became their highest charting song to date. It became quite clear what the fans demanded more of, and B.A.P has delivered. 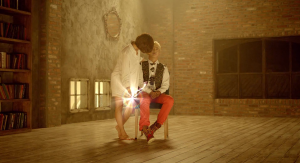 While “Crash” at least featured loud instrumentals which referenced the original B.A.P sound, aside from the short rap verse in the introduction, there is hardly a connection between “Stop It” and B.A.P’s initial trio of hardcore releases. Instead of the loud chest-bumping jam and ultra-hyper choreography that one has come to expect from B.A.P, we receive a heavy dose of sweet and adorable through a guardian angel concept (reminiscent of ZE:A’s “Here I Am”) with a devilish twist. The lyrics have also been dialed down to accompany the softer image. Whereas the lyrics in “Power” are loud, boisterous, and directly address society’s institutional inequalities:

“There’s no more, there’s no more justice.
It’s a world that submits under the power of money.
The weak die in the shadows of the strong;”

the lyrics in “Stop It” are silly, apologetic, and laced with notions of young, innocent love:

TS Entertainment is undoubtedly hoping that changing the image of their boy band will bring about the major breakthrough that occurred with Secret when they were decorated with a cuter, more agreeable image which appeals to a wider audience of K-pop fans. If the commercial success of “Crash” was any indication, this seems like a viable strategy that will propel B.A.P out of the endless clutter of rookie groups and onto a shorter list of established acts. 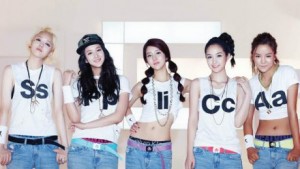 “Stop It” also does well in following industry trends that are gradually gaining credibility. Like many acts seeking to establish themselves, TS Entertainment has outsourced B.A.P’s production to freelance hit-makers (last time I will shamelessly link to one of my own articles). Double Sidekick, the producers behind MBLAQ’s “This is War” and Sistar’s “Loving U,” also produced “Crash” so there is quite a similarity between the two songs in terms of their composition and lyrics. While there is no overdone dubstep break in “Stop It,” there is a very 90s sound and vibe which seems to be the newest trend in K-pop with the funky new jack swing beat of BTOB’s “WOW” and the cheerfully nostalgic melody of Spica’s “I’ll Be There.” “Stop It” blends the RnB, hip hop, and percussion elements of new jack swing with the soft and playful melody of early 90s pop in creating a sound that is finely tuned to suit the head-over-heels in love personas which the boys project in the MV. With their new release, the boys have shed their anti-establishment sound and image in exchange for a more pleasant and likeable one. 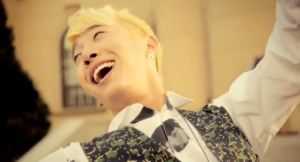 Before the criticisms begin, it’s important to note that B.A.P is doing all this for a reason. As mentioned in Nabeela’s article, TS Entertainment understands that this is the year of the boy band and is attempting to cash in on it. Unlike bigger companies such as SM Entertainment, TS can’t afford their rookie group to flop. They have made a huge financial investment in B.A.P and the future of the company depends on whether or not they become a big time act, one which is at least on par with their sister group. They can’t afford to mess around. They are sticking to tried and true formulas to ensure the success of B.A.P over their sea of competitors. In an attempt to expedite the process, TS has overworked the boys since their January debut, pumping out comeback after comeback along with a reality show and other appearances. This is already their unprecedented fifth promoted release of the year! Could we possibly see a sixth before the year is over?

This is where they go wrong. B.A.P has been around for less than a year and as much as their original image was fresh and unique, they have not been around long enough to lay claim to that one specific niche. Their new style and personalities don’t connect at all well enough to their established image and threaten to alienate their original fan base which they gained through an extraordinarily rugged and edgy debut look and sound.

Furthermore, they are in the midst of an identity crisis which they will have to deal with in their future releases. If this is the image that they choose to stay with, it will be incredibly more difficult for them to remain distinguished among the plethora of cutesy flower boys already out there. If they go back to their ultra-beastly image then they will have to neglect their new fan base and possibly their newfound popularity as well. As Ambika brought up, image changes aren’t always for the best and although I feel that this move will work out for B.A.P and TS in terms of short-term commercial and financial rewards, I believe it will be a hindrance to them in the long run. 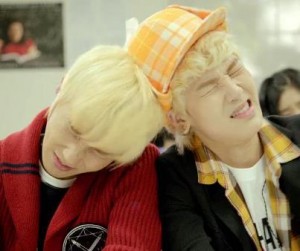 Lastly, I have to agree with Jasper that over-promoting isn’t the best marketing strategy. As important as it is to stay relevant in today’s K-pop scene, there still has to be that wait, that sense of missing a group to build up the anticipation for their next comeback. If B.A.P had stretched out these five releases throughout a two-year period, it would have further maximized the strategies that they put into play. By then, long-time fans who have been highly awaiting their comeback might not feel so disappointed upon seeing their stylistic divergence. Instead, they may be so happy to finally see them again that they will be more forgiving of their identity mishap. As much as I applaud TS’s highly meticulous and aggressive tactics for putting their new boy band on the map, I disagree with the speed and vigor at which they are doing so. It took Secret a full two years to realize their major breakthrough. Attempting to cut that time in half may have disastrous unexpected results. But only time will tell.

Criticisms aside, the song was indeed very pleasant and the MV was light and fun.

Do our readers prefer B.A.P’s cutesier image? Will “Stop It” boost B.A.P to the next level or will it put a stop to their popularity?