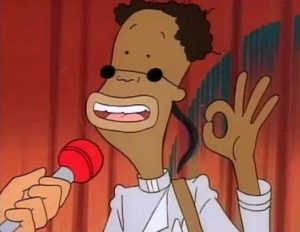 Another incident of blackface happened on SNL Korea; this time A Pink’s Bomi played the role of Michol from the 1983 cartoon, Dooly the Dinosaur. The task of explaining how blackface fits into a global system of white supremacy is a taxing experience in itself.

Whenever these conversations emerge, I remember a quote from Toni Morrison:

Seoulbeats has regularly written about the subject of blackface in Korean media for the past six years. We’ve had roundtable after roundtable after roundtable about it. We’ve written about it with exasperation, irony, earnestness, and called for teaching. This is familiar ground: we’ve tried to bring everyone around to the idea that black people should be treated with respect but this keeps happening and being defended. It’s exhausting to try to reason with a faceless audience who need to be convinced of black personhood.

This paragraph is an expression of this writer’s weariness with the state of the world. Patiently explaining that black people should be treated as human beings is utterly demoralising which is the point of racism, I suppose. We are expected to explain and be ignored time after time until we resign ourselves to the status quo. Despite my weariness, anger, and loss of faith in the powers of a well-reasoned argument based in logic, I will persist. Today, I will be distracted by racism and try to concisely oppose the main defences for blackface in the South Korean context.

Is everyone mentally prepared to continue?

Let’s first review a very concise explanation of the origins of blackface. There are early examples dating back all the way to 1441 where the construct of blackness was displayed for the viewing of white audiences. We will briefly examine the American iteration, popularised in the 1800s.

In the United States, the purpose of minstrelsy was to desensitise the public to the horror of slavery. By dehumanising black people to racial stereotypes, the violence of subjugation was defanged. It wasn’t happening to ‘real’ people, but to undesirable, lazy, incompetent, childlike figures. People were enslaved and their lives were stripped of nuance to allow for the mindset that they could not take care of themselves and needed to be ruled for their own good. Jim Crow laws legislated after the abolition of slavery were supported by socially engineered prejudices, of which blackface was one of the tools.

The use of blackface in South Korean entertainment is usually dismissed or mitigated on the grounds of ignorance, characterised in several forms.

The homogeneity of South Korean society and a lack of knowledge regarding global attitudes about blackface is often cited. “People don’t know about that it’s racist overseas,” the comments section will cry. Logically, this doesn’t stand up to scrutiny. The Korean comedian who popularised blackface or “sikeomeonseu” performances in the 1980s, Lee Bong-won, objected to broadcasting a show which featured it during the 1988 Olympics. He said, “We don’t want to denigrate black people” and “It would be better not to do it” as there would be people from Africa visiting. The performances showed Bong-won and Jang Du-seok attempting to rap and shouting “시커먼스, 시커먼스. 망했다, 망했어” (meaning ‘ruined’ or ‘doomed’) to music while one wore a curly wig. We can reasonably deduce that the temporary suspension of blackface during the time of its popularisation was due to awareness of its controversy.

Since then, the problem of blackface and its international infamy has been repeatedly brought up. Particularly, the character of Michol from Dooly which has been criticised as racially insensitive. People have claimed that because the character is Korean, it does not fit the criterion for blackface and should not be criticised as such. Yet, the character has overdrawn lips, brown skin, curly hair, and idolises Michael Jackson, spending his time singing and dancing. The character is often lost or childlike. The times that Michol has been shown on Korean television, the light brown of the cartoon is darkened, he is dressed in sportswear or an approximation of what racists think is traditional tribal clothing. 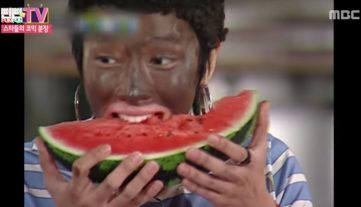 Furthermore, when Highlight‘s Kikwang was made to play Michol for Happy Time in 2015, he was given large hoop earrings, ate a watermelon slice, and performed his signature “sexy dance” that he learned in America. The character perpetuates racial stereotypes of black people, looks like blackface, and is a figure of mockery. If it walks, shucks, jives, and eats watermelon like blackface then it’s frankly an affront on the intelligence of viewers to imply that it’s not because the character speaks Korean.

Following the most recent incident with Bomi, A Pink’ s Hayoung reportedly commented on Instagram that the character’s skin was specifically lightened from the original cartoon to prevent misunderstandings and that the lighting in the video made it appear darker. If that is so, then people behind the scenes were aware of the controversy surrounding the character but thought that the problem was the shade of the face-paint. Separating Michol’s character from its racist overtones would require a design overhaul that would render it unrecognisable. It wouldn’t be Michol anymore.

In every society there are fictional characters that were acceptable in the past because racist thinking was normalised (see Golliwogs, TinTin in the Congo, and that song in the Disney version of Peter Pan). Now, global values have changed and it’s no longer cool to do unforgivable shit to others because of their skin colour. That means that these “beloved characters” that are rooted in oppression must be consigned to the annals of history with a note saying, “When racism was still okay, people used to love X. Now, we know better.”

Another way to try to take the sting away from the use of blackface is to say that without structural inequality enforced on black people in Korea, anti-black aggression doesn’t have the same weight as in places with a history of anti-black oppression. People have argued that without historical legislation particularly targeting black people, such as Jim Crow laws or apartheid in South Africa, blackface loses its seriousness and places it within the category of “othering” which is prescribed to foreigners as a whole. The sexualisation of white women, and stereotypical portrayal of South-East Asian migrant workers have been cited as examples as equatable to blackface in the Korean context. These problems are both serious and should not be dismissed as they affect the treatment of foreigners attempting to eke out a living in the country.

The plight of migrant workers, particularly, is dire since wage discrimination for migrant workers is the highest in 22 countries according to a 2015 OECD survey.  Othering of foreigners is not something that can be easily shaken off when there are no legal protections against discrimination. This defence is presented as a mitigating circumstance: without historic legislative inequality, anti-blackness is rather ‘anti-other’ or ‘anti-foreigner’ sentiment which is implied to be not as serious. This is flawed as bias against foreigners impacts the material opportunities of people living in Korea.

Lumping the treatment faced by discrete racial groups under the umbrella term of “foreigner” is not ideal as it is a nuanced discussion, to be approached with attention to each group’s specific problems. Black people also experience shadism or colourism in Korea. If we think of prejudice as accumulative then black people entering the Korean landscape have anti-foreigner sentiments, bigoted attitudes based on their country or continent of origin, as well as colourist problems.

To illustrate how undesirable black skin is framed: former Miss Korea, Honey Lee appeared in an edited blackface photo segment on Get It Beauty in 2015 which questioned what she would look like if she had dark skin. 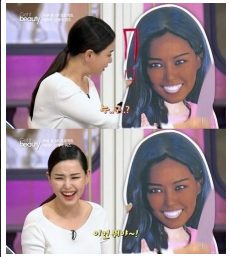 She responded to the photo by laughing, saying it was ‘too much’ and the segment was used to illustrate how to protect one’s skin from the sun. During the programme, comments by co-host Kim Jung-min likened her to Beyoncé and said “if you peel off black skin you can return it to a bright tone”. Telling people to peel their skin off because of the colour, even in jest, helps reinforce ideals of whiteness as beauty.

According to the World Health Organisation, 40 percent of women in China, Malaysia, the Philippines and Korea admitted to using skin lightening products. Skin bleaching products can cause blood cancer such as leukemia, liver and kidney cancer and could also result in severe skin conditions.

The origins of colourism often are rooted in racist histories of colonialism and ideas about the relationship between pale skin and socioeconomics: the assumption being that if one is poorer, one is also darker. Darker skin has now been associated with foreignness and mixed-race Koreans as well as Koreans who are naturally darker.

Han Hyun-min, a 15-year-old model, whose father is Nigerian and mother Korean, recalled, “Some classmates used to say things like, ‘You have a Korean mum, so why do you look black?” Kimberley McKee, a Korean-American said, “2010 saw me argue with an ahjussi about being Korean—I clearly lost the argument—and me be asked by an ahjumma if I was from Africa.” Their Korean identity was invalidated by the colour of their skin; leaving them open to the same discrimination as foreign black people.

Black people face pervasive interpersonal prejudice in everyday settings and their lives are negatively affected because of stereotypical media depictions of them, including blackface. UN Special Rapporteur on racism, Mutuma Ruteere, urged the Republic of Korea, in 2014, to enact a comprehensive anti-discrimination law, saying it is essential for the government to address the issue of racism and xenophobia in view of the country’s history of ethnic and cultural homogeneity. He further recommended that South Korean authorities fight racism and discrimination through better education, as well as ensuring that the media is sensitive and conscious of their responsibility to avoid racist and xenophobic stereotypes and that perpetrators are punished where appropriate.

The use of blackface in Korean media is locally controversial as well as internationally and quite frankly it’s morally indefensible. The practice plays into a larger scheme of anti-blackness that doesn’t only hurt feelings of international fans of K-pop; it creates a culture where people who live in Korea are materially disadvantaged. International regulatory bodies have earmarked the media’s role in changing the attitudes of people regarding racism and xenophobia. Comedians and others who use blackface should be subject to social and material consequences for sustaining racist stereotypes. They know better. They should do better.

It is the opinion of this writer that media companies who allow this to happen should face consequences to make them do better. Waiting for the South Korean government to enact laws and guidelines addressing racism isn’t an urgent enough solution. The use of blackface should be loudly condemned by civil society every single time it happens. We have to make it socially unacceptable and economically unfavourable to dehumanise black people in every country.

I opened this article with a quote from Toni Morrison, and I’ll end it with one by another African-American woman author, Zora Neale Hurston:

“If you are silent about your pain, they’ll kill you and say you enjoyed it.”