The competition is only heating up as we reach the Sweet 16 of Seoulbeats March Madness. But before we dive into the matchups for this round, let’s take a look at our current leaderboard for those who entered our Pick ‘Em contest.

We have three entrants who are clinging onto a perfect bracket, having all eight of their regional finalists still in the race. Those tied for second place have seven out of eight regional finalists still in play with the incorrect entry labelled in red. If you don’t see yourself on the current leaderboard, there is no need to worry. There are still four more rounds of competition to go and the leaderboard will be updated at the beginning of each round. Best of luck to all our contest participants! 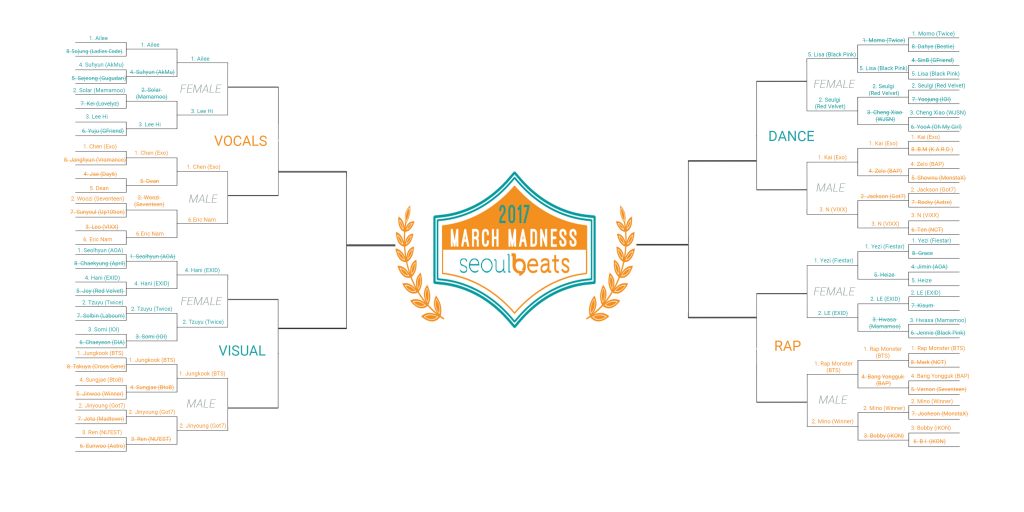 Moving the focus back to the actual competition, we witnessed two huge upsets in the Round of 32. Sixth-seeded Eric Nam overcame the second seed and faces off against Chen for a chance to represent the Male Vocals region in the Elite 8. Meanwhile, fifth-seeded Lisa took down the top seed in the Female Dance region to find herself going up against Seulgi for the top spot. Let’s not forget about N, Hani and Lee Hi who also had to pull off upsets last round in order to remain in the competition. Will the magic continue for this group of overachievers?

As the field of contestants dwindle, so do the number of polls. We are down to only 16 competitors and 8 polls in this round. The winners of this round will advance to the Elite 8 to face their counterpart of the opposite gender where things will certainly get interesting.

Vote carefully as your vote counts for 100% of the results. Polling for this round ends on Tuesday, March 21 at 11:59 PM EST. Or whenever Russia hacks the election.