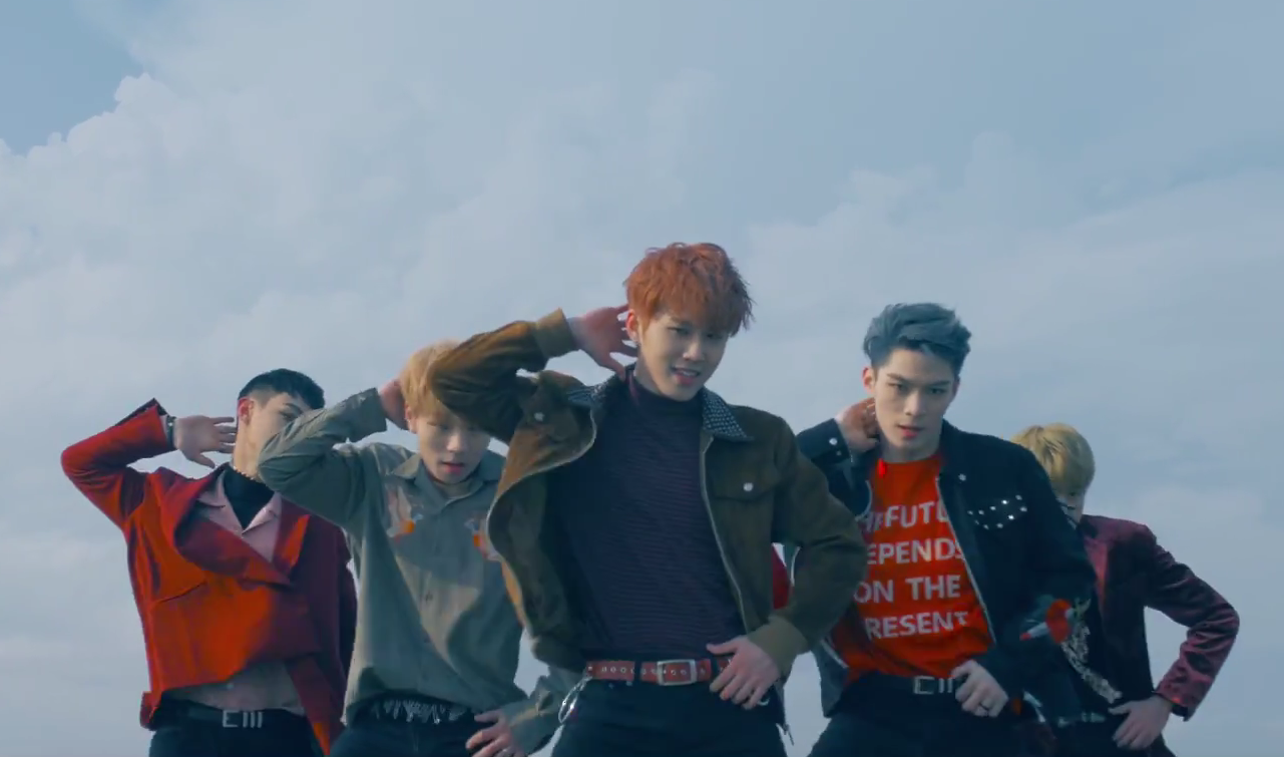 Debuting with their first mini album “Butterfly Effect,” Seven O’Clock brings to listeners the title track, “Echo.” The new six-member boy group has been slowly gaining traction pre-debut through social media sites, where they introduced themselves to the public. With the release of “Echo,” Seven O’Clock brings to listeners a sound that interlaces catchy electronic beats with a tinge of gentle poignancy. These new faces show promise in developing a style of music that is their own.

The group consists of A-Day (leader), Vaan, Hyun, Younghoon, Junggyu, and Taeyoung. The name “Seven O’Clock” comes about from the members’ desire to bring happiness to their listeners through the music they make from the start of each day (7 a.m.) to the end of the day (7 p.m.). The group has expressed their wish to heal and inspire hope through music.

Upon first listen, the members’ voices complemented each other well, with a compelling alteration between the deeper, huskier voices and the gentler ones. This combination did manage to evoke a small wave of emotion. The lyrics that struck me most were:

The image of time as embodied by the clock had a poeticism to it that caught my attention. The music and lyrics promised potential for an emotionally affecting piece, an achievement unexpected of a song predominated by the heavy beats of house music.

However, the depth of the song was lost in the poorly constructed MV, at least in the blending of various elements. There was clearly an attempt at creating the portrait of the lonely figure wandering in the city. Each member walks aimlessly, but ultimately they find each other. There is the almost overused shot of them running together in an open field. They walk side by side as a show of a sense of camaraderie in a seemingly forlorn state of the world.

The MV ends with them looking off a bridge, at the sea and the setting sun. The scene is beautifully shot, and there was definitely the sense of loneliness prodding at the edges of this fragile bubble of brotherhood. It was a moving scene, but it failed to be as enrapturing as such an image seemed to be trying to achieve. 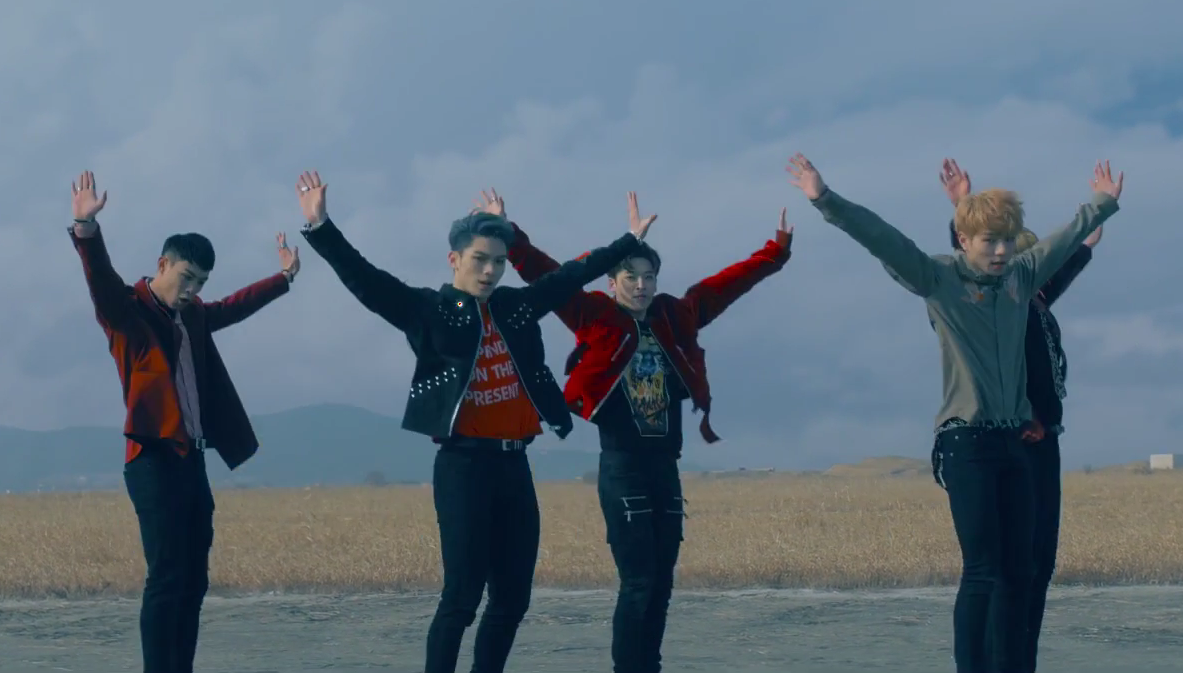 A primary reason for this was the disjointedness of the scenes within the MV. The beginning of the MV showed promise in the comfortable pace at which scenes were changing back and forth. The initial alternation between images of members wandering and the field where they are singing and dancing amplified the mood of the song. It also indicated some form of narrative arc beyond just mere performance that some MVs might choose to focus on.

As the MV progressed, however, it become increasingly difficult to detect a clear arc behind the performance. It was a struggle trying to infer the meaning behind the MV with all its familiar images. Each scene flitted to another too quickly to allow myself to be immersed and captured by the moment.

Furthermore, it was also a pity the shots of the dance scenes failed to allow for complete appreciation of the choreography. The shots of the whole group dancing were often no more than five seconds, fragmented by fleeting close-ups before it switched to another non-dancing scene. The impact of the dance failed to come through, and the narrative was incompletely delivered.

Perhaps a redeeming factor would be the aesthetics of the MV. Coloured in pastel tones, it is at once warm and distancing – an artful manipulation of lighting. The scenes at the beginning that captured the city, when filtered through the soft lighting, muted the hectic and harsh clamour of the urban landscape. It created a sense of isolation interlaced with a quiet beauty. The pastel tones felt like a glass wall that barricaded a more beautiful world from the listener. It falls in well with the song, evoking a yearning to reach out and connect with a once beautiful past.

The feeling of dissociation from watching MV also ties in well with the title of the song. The experience manifests the notion of becoming nothing more than an echo, unable to make a concrete connection with reality. The song lyrics calls for a lover, asking:

Just stay still.
I do not care if it’s you. Just fill in your secrets.

However, these calls for affection seem unheeded, like an echo that eventually fades out and is forgotten. There is a futility infused within the song that matches well with the MV’s isolating atmosphere.

Yet there remains a nagging thought that the style of the MV, its context and presentation, reminded me too much of the MV’s for BTS’s “The Most Beautiful Moment in Life” series. The MVs that came to mind were namely “I Need U” and “Epilogue: Young Forever.” It’s almost ironic that the title of the track, “Echo,” bites back: are they mere echoes of those who have paved the paths to success?

I am torn between criticising myself for being too harsh on Seven O’Clock for their debut track, and wanting to demand quality because of the competitiveness of the industry. “Echo” does not fail entirely as a song. The song is not too shabby itself, though seemingly lacking in novelty. However, my disappointment lies in the MV that destroys the package. With the promise that it showed at the start, the eventual crumbling made it even more of a waste at the end.

Intentionally or not, this resemblance was too much to be dismissed. It diluted the uniqueness of Seven O’Clock, especially since this song is part of their debut. Coming after the success of BTS, with their artistic depth that is rarely seen in the K-pop industry, it seems hard to not compare boy groups that appear to have similar styles.

As much as imitation is the sincerest form of flatter, it seems more viable that as time passes, Seven O’Clock should explore and find a unique voice for themselves. Perhaps it is too early to condemn them as mere copies of their predecessors.