Round one of Seoulbeats March Madness has concluded and, without a moment’s pause to catch our breaths, round two is upon us! What started as a field of 64 has narrowed to just 32 contestants. And it only gets tougher from here.

There are a few marquee matchups to look out for in this round. In the Female Visual region we have Tzuyu vs. Somi, both of which were contestants on Sixteen which led to the formation of Twice. Similarly, we have Mino vs. Bobby in the Male Rap region, both of which were contestants on WIN: Who is Next? which led to the formation of Winner, as well as members of project group MOBB. Which side of the blood bath will you be fighting on? 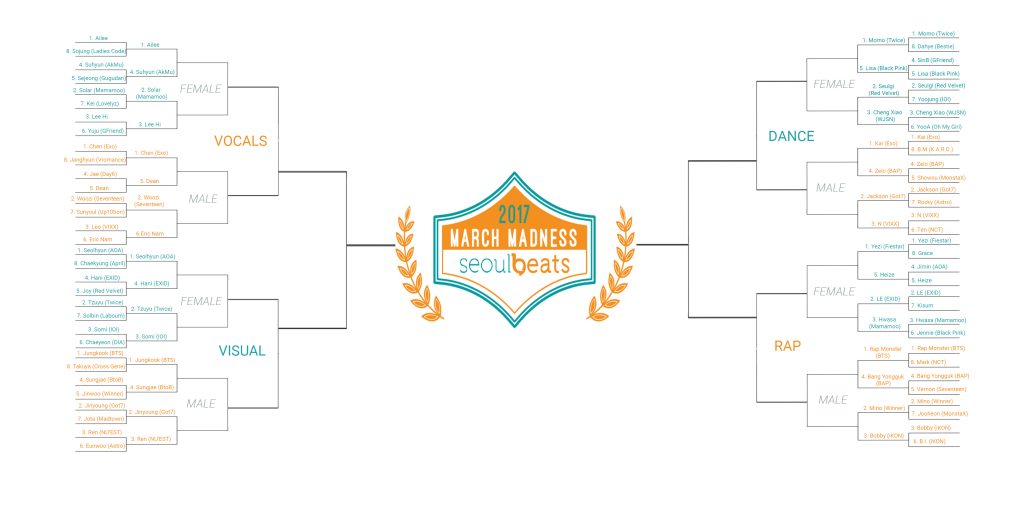 Don’t underestimate the power of the underdog. The lower ranked seeds from round one to make it into the second round are Dean, Eric Nam, and Lisa, all of who defeated their competition by a comfortable margin. Will they have what it takes to go deeper into the tournament? Your vote decides 100% of the outcome.

Cast your ballot by Saturday, March 18 11:59 PM EST to have them count. We only consider the popular vote. No electoral college!