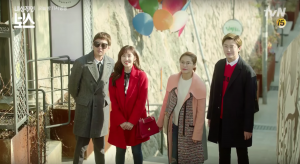 Introverted Boss came to a close this week and with the recent direction of the series, it seemed as if a clichéd conclusion was just around the corner. However, while the preceding episodes provide lackluster buildup, the final episode manages to be more satisfying than initially anticipated.

Of course, the road leading to the aforementioned ending is fairly trope-tastic, paved with company scandal, family disapproval, yet another piggy back ride, and a half-hearted foray into love triangle dynamics. There is even a momentary and completely unnecessary side plot involving a heartwarming attempt to save the struggling Chae family barbershop.

In fact, so many odd side stories occur within the course of six episodes with almost none of them adding any real value to the story itself. Why do the writers spend several minutes showing Eun Hwan-gi drinking wine and making food for coworkers he has barely ever met? What is the purpose of including the jewelry campaign story? Is it entirely necessary to get Hwan-gi completely plastered once again?

The most difficult plot point to swallow, though, is the sudden (though slightly foreshadowed) realization of Chae Ro-woon’s sister’s true feelings towards Hwan-gi. While this twist provides reason for the two leads to press pause on their new found love and therefore kill a couple of episodes, it also serves to peel another layer of realism away from the entire scenario. In addition, it makes it even more difficult for the viewer to believe that the two lovebirds would not forever feel an impossible strain on their relationship going forward. 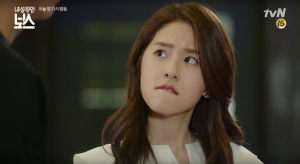 Luckily, the last episode provides a little breath of fresh air amidst all this stale material. The most refreshing aspect of this episode is the honest depiction of what happens after the big dramatic reunion. In many dramas, the main couple reunites after a painful (and usually brief) estrangement just in time to have their cinematic happy ending before the credits roll. Introverted Boss, despite its predictable past, chooses to use its extra time in a more interesting and far more believable way. After Ro-woon runs to Hwan-gi and declares her undying love, even in the face of their uncomfortable circumstances, the two share a loving kiss on a beautiful scenic road.

What comes next, though, is the inevitable reality of all relationships, complete with petty spats over pet peeves. While opposites like an introverted CEO and an outgoing ex-actress may attract, they are also bound to find frustration in their differences. Such frustrations not only create opportunity for semi-comedic scenarios, but also provide the vehicle for a real life lesson, as both characters must learn how to compromise and make slight adjustments to understand their other half. It is somewhat unfortunate, however, that Hwan-gi’s compromise has to come in the form of a cringe-worthy and very public dance confession. 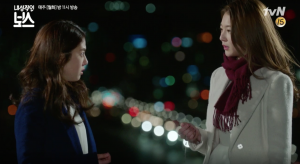 It is also rather nice to see the writers allow Eun Yi-soo and Ro-woon time to address the understandably tense air between them, with the former finally stating her apology and the latter admitting that her total forgiveness could take time. This required healing period passes in the blink of an eye, though, as the two women are laughing together in a hot tub not one minute later. However, it is clear that this reconciliation is fueled primarily by a mutual affection for Hwan-gi and not necessarily by true ease of heart.

Perhaps the most satisfying part of the final episode, however, is watching Kim Gyo-ri flat-out reject confessions from both Eom Sun-bong and her previously beloved Jang Se-jong in order to focus on her own life and career. This is not to say that she must abstain from romance in order to be an independent woman, but there is undoubted value in her dedication to self-development and seeing her stick to this initial resolve is inspiring. Plus, when both men are acting like squabbling infants in their efforts to win her heart, no one could really blame her for not accepting.  You go, Gyo-ri.

All in all, this show maintained mildly entertaining status throughout without ever being able to cross into stellar territory. In the future, it would be great to see tvN take another shot at the kind of content contained in the first four episodes, but possibly with a pre-filmed drama that fan complaints have no sway over. Despite joining on to a somewhat doomed drama and having to shift gears early on with the rewrites, the actors performed very well with the parts they were given and one can only hope they can continue on to better roles in the future. The ending of Introverted Boss will most likely not leave viewers feeling a huge loss, but the writers at least managed to pull out an ending that exceeded expectations and will hopefully leave audiences with a good final impression.