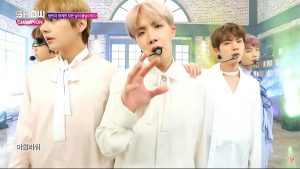 It’s been quite a week. B.A.P made their comeback with leader Bang Yongguk healthy enough to promote this time. BtoB also returned to the scene, as did G-Friend, Romeo, and Day6. Loona debuted their sub-unit Loona 1/3 while Lu:kus emerged with their new name L.A.U. after some member changes.

Speaking of changes, South Korea is going through a major one as President Park Geun-hye was impeached last week. In observation of this historical moment, many broadcast stations cancelled their live programming, which included MBC Show! Music Core and KBS Music Bank.

Taeyeon got her first win for “Fine” on Mnet M! Countdown, and Twice swept up trophies for “Knock Knock” on SBS The Show, MBC Show Champion, and SBS Inkigayo. Congrats to both artists on their achievements!

For those of you new to this segment, what usually happens is we list my favorite performances and then invite our readers to share theirs in the comments. Nobody is obligated to do this, but it’s always fun to interact with other fans with similar tastes in music. Please don’t misunderstand this list as some hot-or-not meter because it really is about highlighting the most enjoyable aspects of these stages. Now, let’s get into it!

There is something slightly haunting and addictive about this tune. It’s probably the catchy chorus of “ringa linga linga ling” — not to be confused for Taeyang‘s “Ringa Linga” — that has me so enchanted. What probably thrilled me the most was seeing this group vogueing. It’s been some years since I’ve seen that dance move used so prominently in choreography. It really fit with the song, and the ladies killed it. Even though the dance was sexy, it didn’t feel overly salacious. There was just enough sex appeal for it to come off attractive instead of desperate.

Don’t you hate it when you hear a B-side that sounds like it should’ve been the title track? I’ll reserve my side-eye towards whoever chose “Fingertip” since G-Friend performed this song. I’m weak for just about any song that includes string instrumentals, so this pretty much had my heart from the beginning. I also prefer the routine for this song over “Fingertip” because it suits G-Friend really well. It shows off their synchronicity and teamwork. If this is the start of their progression towards mature concepts, then I’m here for it.

Before anyone gets on me about why “Wake Me Up” wasn’t chosen, I’ll remind everyone again that I can’t stand when they insert that freaking whistle for their performances. It’s distracting and annoying. Besides, did you see how Jongup stared up at the camera in the beginning? My bias is glaring directly into my soul while wearing a deep V-neck. I can’t simply ignore that. Actually, all of B.A.P looked extremely hot, but that’s not why I picked this. Okay, maybe it is. I still regret nothing.

Since we’re discussing groups who are extra, it’s a great time to bring up BtoB. I love their facial expressions in this performance. They are giving so much fan service to the camera. How do you not smile watching them? The camera crew caught every adorable wink and gesture, adding more charm to this bright stage. I want to fight whoever styled Changsub‘s hair to make him look like an outdated ahjussi, but he still killed it with the aegyo. Also, I want Peniel to wear a fedora but not because of his bald head. I just think he’d look super slick wearing one.

It saddened me when I knew BTS could only promote a week because of their tour, so this goodbye stage was the ideal way to end their promotions. The way this was filmed made them look like angels straight from heaven. Look at how that light bathes J-hope as he serenades you. I want the afterlife to be BTS doing contemporary dance while singing. I won’t haunt anyone’s homes if this is my eternal paradise. Special shout-out to the camera crew for capturing this beautiful choreo in a one-shot. That feat is never easy, so I applaud the smooth execution here. We should never underestimate how important great camera work is for performances.

That was it for this week! Which stages did you like?