Wanna.B's "Why" is Mediocre, But Enjoyable

Wanna.B‘s latest comeback, “Why?”, is a fun bop for the summer time. It’s a pretty standard pop song; it has a catchy melody and easily danceable beat. They do a good job delivering a fun song and it’s hard to get the chorus out of your head once you’ve heard it. Plus, the main hook of synthesized strings add an interesting layer to the rest of the song.

The synths help make the song stand out a bit, but that’s about all that separates it from what other girl groups have put out this year so far. It’s a very nondescript song overall and if someone told me it was another group, I probably would have believed them. With summer releases from other girl groups like Sistar and the Wonder Girls, it’s hard to compete.

The content of the lyrics is what you would expect. The object of their desire is a guy who couldn’t care less about them. They bemoan his indifference, singing:

You can look and look
But you won’t find a girl like me
You won’t even look at them
There’s no girl like me so what’s wrong?

They want him so badly that they try all the normal methods of getting a guy to notice you: wearing high heels, perfume, and expertly applied makeup. Apparently all this doesn’t tempt him and he keeps playing hard to get. He ignores them, doesn’t even acknowledge them. During the chorus they accuse him of playing hard to get. Maybe the reason he’s playing hard to get is because he’s not interested in women at all. 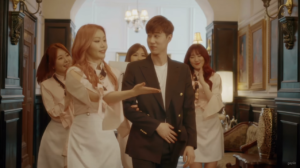 The video itself has similarities to Mamamoo‘s “Um Oh Ah Yeh” and Girl’s Generation‘s “Lion Heart.” They all center around having a crush on a guy and them trying to get his attention. In “Why?”, though, only one of the members has a crush and the rest of the group tries to help her get his attention with varying degrees of disaster.

The music video opens with Wanna.B hanging out at a sleepover, doing what girls do at sleepovers. Once they establish that they’re going to help their lovesick member, they find themselves pretending to be flight attendants. In order to have an excuse to initiate contact, one of the other girls spills and they have to help the guy clean up. These sort of mishaps happen throughout the video; from him passing out from drinking wine (whether or not they drugged him isn’t clear), to her performing CPR in a hospital room.

In between, they’re dancing in costumes appropriate for the settings and posturing for the camera in a vibrantly colored room. The aesthetic of the room is very reminiscent of some other MVs like “I Feel You.” The dance itself is probably the best part of the video. While it’s not flashy, it’s complex and makes good use of the seven members. The music video might be considerably more fun to watch if the dance cuts were longer. Their use of hand gestures and transitions from one formation to the next makes it enjoyable to watch. 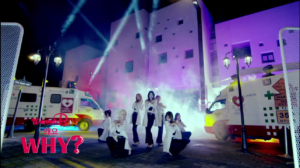 na.B’s “Why?” is mediocre, but enjoyable. It doesn’t stand out from the crowd, but it certainly isn’t bad either. Wanna.B as a group has the potential to produce music that could be really fun and different while maintaining the core catchyness that their other songs contain. Unfortunately, “Why?” isn’t that song and the music video reflects that. 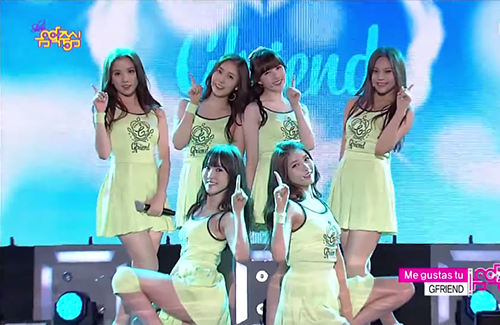 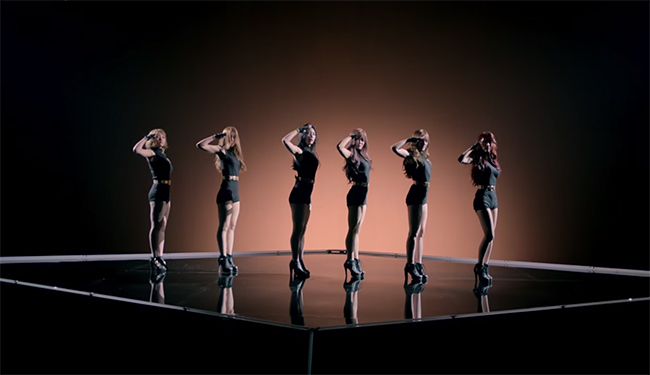