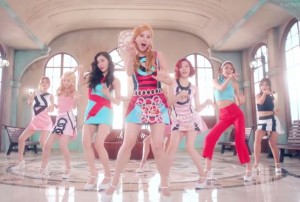 SNSD has had quite the colourful comeback this time around, with the summery and fun “Party”, to the leathery badass-ness of “You Think”. And now, we have this splendid mixture of retro and classy in “Lion Heart”, a departure from their more powerful concepts in “Mr. Mr.” and “I Got a Boy”.

Sugary enough to give the listeners diabetes, what makes “Lion Heart” stand out from the typical bubblegum pop is its old-school sound which makes it very Hairspray-esque. The pleasing vocal harmony, with the intentionally airy vocals, complements perfectly with the instrumental to deliver a song that fortunately sticks a little better than it otherwise would have been. The repetitive background clapping and layered “ohs”, tops off the funky bass and brass lines to increase the groove-meter of “Lion Heart”, and I was surprised how much I actually enjoyed it, despite the distinct lack of dynamics and climax throughout the song. 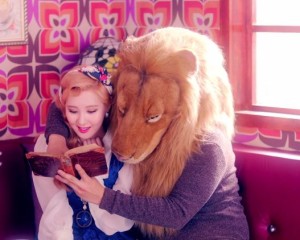 “Lion Heart” implants the imagery of the male lead as a lion-like predator, preying on the innocent girls who find it difficult to resist the guy’s romantic advances. The girls fall hard for the Casanova, not realizing that he’s stepping on multiple boats at one time. His playboy nature is attributed to his lion heart, which reeks of bravado and unfaithfulness, unable to settle his sights on one girl alone.

Still, while the girls are aware of his roving glances, they implore him to stay faithful to them; they make it their goal to “tame your lion heart, your lion-like lion heart”, although it’s left open-ended if they actually succeed. Well, if even Girls’ Generation can’t achieve that, nobody can.

I think about it hundreds of times
But a thousand times, the answer is you

The lyrics are at best fluffy and flirty, and on its own, would not have been title song-worthy. However, the MV does a whole lot to buoy the impact of “Lion Heart”, with spot-on styling and stunning sets. The saturated and lovely colour palette create a fantasy-like atmosphere, and the retro outfits of the girls elevate their already-high standards of elegance and classiness, fitting of heroines from a nostalgic period film. The girls have been in the industry long enough to graduate from the representative uniform fashion, and I appreciate that each got the chance to actually look their best, since the right hair and outfits can go a long way. The amount of effort and detail put into the styling definitely showed through, and is probably the crowning glory of this MV.

In the beginning, the girls sit down to watch a show, which is essentially the remainder of the MV divided into three chapters — Chapter One, said guy actually goes to romance all eight girls who fall head-over-heels for him; Chapter Two, all hell breaks loose when the guy arranges eight different dates at the same time and venue, and of course, the girls are horrified to find out he has been stringing all eight of them along; Chapter Three, guy tries to get back into the good graces of the girls, but they rightly rebuff him and do away with him. It’s a tongue-in-cheek moment to see the male lead literally dressed up as a lion, going the full nine yards with the comical lion mascot costume that seems to reminiscent of Beauty and the Beast.

The distribution of lines and screen time also deviated from the typical trend of being Yoona-centric. The choreography is nothing to write home about, although the dance moves definitely bring back the retro Hairspray vibe once again, with a lot of hip and shoulder action. And yes, the random open-leg move in their sparkly dresses threw me off for a while. 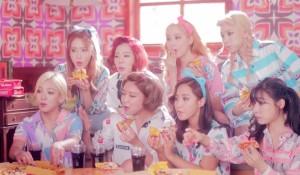 All in all, “Lion Heart” seems to be joining in on the current retro trend in K-pop, similar to what Wonder Girls also did with “I Feel You”. And while it doesn’t entirely miss the mark, it’s unfortunately not striking enough to enamour non-Sones to hit that replay button. It might veer too sugary, or too one-note for some listeners, but I do appreciate this new sound that SNSD is experimenting with. In essence, it’s not aiming to be this spectacular piece of music, but merely offers a taste of a different palette for fans. At least we know that the girls would have been equally drop-dead gorgeous in a different era, and their ability to pull off any concept definitely proved that SNSD members are well-rounded veterans capable of versatility.

P.S. Anyone managed to spot the typo in the video without being told?