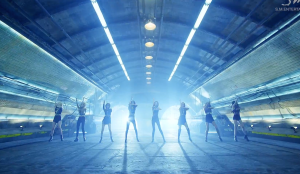 In a comeback structure reminiscent of 2010’s “Oh” and “Run Devil Run” promotions, SNSD returned this week with a full album and the final two singles of their summer comeback: “Lion Heart” and “You Think.” The two singles couldn’t be more different, but ‘variety’ is the name of the game for SM this summer.

If “Party” was meant to be the teasing — and safe — sample, and “Lion Heart” the traditional SNSD single, then “You Think” becomes the track where the girls are let loose, both vocally and conceptually. Together, the three tracks offer something for everyone, and at least one is guaranteed to be “public friendly” enough to catch on.

The final installment, “You Think,” is powerfully confident and shows off a sexy, mature side of SNSD that — although many fans love it — we don’t get to see often. It’s reminiscent of good ol’ “Run Devil Run” where the ladies of SNSD got to show off their darker side for the first time. Only this time, the vocals pack way more of a punch — though the concept, not so much.

First things first, the concept itself is a mess: there’s an unexplained apple motif, a sparkly car, evening gowns, the dance outfits include BDSM-style harnesses (complete with collars), and why is there a skeleton hugging a phone booth? I was half expecting whips to come out at some point, but instead a poor apple was stabbed to the point of dripping pink blood.

None of these things make sense, or have anything to do with the song. But none of that really matters too much because unlike the narrative of “Lion Heart,” the MV centers around visuals and choreography — and SM more than delivers on that front. After two high budget MVs, it’s perfectly understandable that SM took a more stripped-down approach for the final installment. 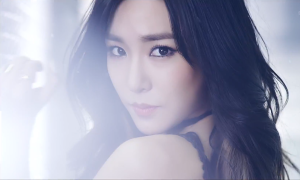 If visuals were what counted, then SM made the most of it. All the members look fabulous and share pretty equal screen time — though Yoona did seem MIA for a majority of the MV. Similarly, the ladies nail the choreography. It’s sexy and strong, building off what made “Catch Me If You Can” so appealing to fans.

The MV is split into two main sets: one pink and bedazzled and the other a dimly lit underpass. What irks me is that the two sets are so contrasting that they don’t feel like they’re part of the same music video. If perhaps a hint of choreography was featured in the pink set, or a flash of pink on the street set, they would feel more connected.

The MV doesn’t have much to do with the track, but that doesn’t take away from the fact that “You Think” is a decent listen — though it does struggle a bit between moments of being too busy and periods of emptiness. 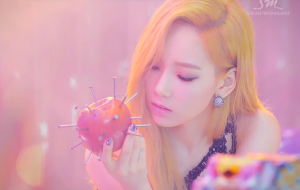 At first take, “You Think” sounds like a throwback to an early 2000s club hit. There’s air horn somewhere in there, clap sounds along with bells, and a more lax bass line than many recent SM productions. Many fans, myself included, were excited about the track when the demo first got out, and SM made few changes to the original track — retaining the high energy and cocky flare, but infusing it with riffs and adlibs that allowed the members to show off a bit.

The lyrics are overflowing with confidence, so it makes sense the vocals should pack an equally powerful punch. After all, timidly proclaiming “you ain’t cooler than me” over and over again would hardly be convincing.

SNSD’s main vocalists, Taeyeon, Tiffany and Seohyun, are no doubt quite talented, and many times they have to hold themselves back in SNSD group tracks. “You Think” offered an opportunity for TTS to finally let loose on an SNSD track, and boy, did they. Unfortunately, the fact that TTS can sing so powerfully (and high) makes their parts feel more like a sing-off than an expression of the confidence of the lyrics. With their parts being as dynamic as they are, the intensity of the vocals is all over the place — especially when mixed with the other members’ vocals.

On the bright side, while TTS are having a riff-off in their respective corners, other members — particularly Sunny — get their chances to shine. If “Lion Heart” was Yuri‘s moment in the vocal spotlight, then “You Think” becomes Sunny’s. Sunny abandoned her usual cutesy vocals and pushed for a more sultry and powerful tone in this track, and it was definitely a refreshing change. At times, the vocal mixing did make her sound a bit robotic, but it’s nothing compared to how well she took on her lines with a new dynamic that was not only impressive, but appropriate for the track.

Sooyoung and Hyoyeon also impress in the rap bridge. Sure, they’ll never be contestants on Unpretty Rapstar (I hope), but the rap breakdown is one of the best parts of the song and provides just the right kind of break before moving towards the song’s climax and the multi-layered final chorus.

At the core, “You Think” feels a little more sloppy than the other two title tracks of this comeback. The thing with “Lion Heart” was that it very much felt like a group release, even with each member having their own individual storyline. There was cohesion between the styling, the concept and the track, as well as between the members’ parts. “You Think,” on the other hand, feels like it’s missing a piece. It’s more like eight women, all singing a song their own way without anything to tie it all together, aside from some spectacular group choreography. 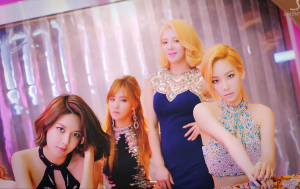 Despite that somewhat off-putting sentiment, “You Think” is still an exciting release and an appropriate conclusion to the three-part comeback. Between the three releases, each member has had a moment to shine and members were allowed to show off different sides of themselves both conceptually and musically. “You Think” is the final high-energy punch that assures us just how multifaceted SNSD still is.

Readers, what’s your favorite track of SNSD’s summer releases, and can someone tell me what the apple motif is about?