Wonder Girls’ “I Feel You” Is Full-On Retro

This year has seen a stream of comebacks from second-generation idols, and Wonder Girls is continuing the momentum with their long-awaited return. This comeback comes three years after their last release as a group, and multiple member changes since — on one hand, Sohee and Sunye have withdrawn from the group; on the other, Sunmi, after a successful debut as a solo artist, has returned to Wonder Girls to form their current four-member lineup.

Their comeback this promotion cycle round generated considerable hype after it was announced that the group would be returning as a band. A series of teasers ensued showed the members playing their respective instruments: Sunmi on the bass guitar, Yubin on the drums, Hyelim on the bass guitar and Yeeun on the keyboard. The clips definitely racked up expectations, not only because the members showed competent instrument-playing skills, but also as it suggested a dark, strong concept based image it created. I don’t think anyone would have minded if JYP took any of the short segments we were shown and turned it into a full-length song and music video and that was their comeback.

However, like most teasers in the world of K-pop, the instrument teasers didn’t do much to indicate the actual route the music video would take. They were apparently simply there to show the members could actually play their instruments. The actual album turned out to be very different, but fortunately, different doesn’t always mean bad. This collection of songs is impressively self-composed (with the exception of the title track by Park Jin-young), and its title, Reboot, is a fairly accurate description of the concept the group is going for with this comeback. Wonder Girls has always been known for their retro style, given that most of their hit tracks have a retro touch, but this release really embraces the genre. “I Feel You” sounds like it came straight out of the ’80s.

Two concepts come to mind immediately when watching the music video — retro and sexy. The first is relatively evident right from the beginning; if the low definition video, upside-down MTV logo, title text and colours in the intro shot don’t scream “old MV” to you, you’ve probably missed its point. While these particular features don’t continue for the whole video, the ’80s influence does persist. The styling and set of the dance shots, in particular, are very typical ’80s; as a matter of fact, the dance shots specifically seem like a nod towards Robert Palmer’s “Addicted to Love.” I’m actually surprised the group went pretty much full on retro instead of adapting this past style into something modern. Only the ending contains more contemporary shots; after the camera flash at 2:48, the MV is bathed in a splash of vibrant colours, and the group shots showing the members throwing a party that looks more like what you would see in a girl group MV nowadays, which is quite a bit of fun and a visual treat. 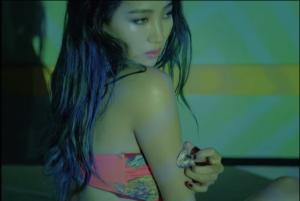 However, what drew more attention (and quite a bit of criticism) upon the initial release of the music video seemed to be the bathing suits which the members were wearing in the dance shots. While some criticised the group for the skin exposure, others argued the outfits were yet another adopted aspect of the ’80s. In my opinion, while the use of swimsuits as an intentional reference towards past pop culture appears more likely just because it fits in with the rest of the styling (as in, I can’t imagine how someone would think of dressing a band in bathing suits otherwise), it also doesn’t change the fact that the music video of “I Feel You” as a whole is meant to appear sensual. That isn’t necessarily a negative thing: the members show a surprising level of confidence and moderation in their performances, which makes scenes that could have potentially come off as awkward or uncomfortable to watch alluring (such as with Yeeun with the ice cube), or playful-seeming (such as with Sunmi in the intro). Not to mention that they also suit the concept well — the “Addicted to Love”-esque heavy makeup and slickly tied back hair gives them the members a very elegant and mature look.

Meanwhile, the song falls right in line with the MV in terms of the feeling it gives off. It seems like Wonder Girls has adopted Park Jin-young’s trademark half air and half sound singing technique, and this wouldn’t be so noteworthy if not for the fact that the sultry sound it gives the piece is especially appropriate for this song in particular. The sultriness is also present in the way the members execute the short spoken verse after the chorus, which struck me as a nice transition into the next verse. 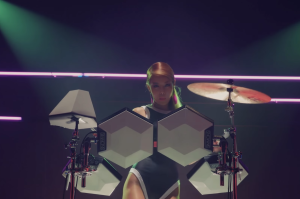 The composition of the song is also not any less retro than the music video. Some have noted that the track gives off vibes of Exposé, another group with significant musical contributions in the ’80s. It’s definitely not the Wonder Girls’ most public-friendly track, but I’m glad they took the unconventional route with “I Feel You.” One of the most redeeming aspects of the song is the instrumental accompaniment. It contains a complex, driving percussion line that provides the song with a lot of its excitement (props to Yubin who is responsible for it during lives), and more notably a synth-heavy melody that gives the piece a unique sound characteristic of previous eras in music. As a matter of fact, the instrumental lines are so prominent that I would argue that the little instrumental break at the beginning of the song that is repeated multiple times through the whole thing almost defines the song more than the refrain does. This likely has to do with my main complaint with this song, which is that the lack of catchiness in the chorus. While it transitions very smoothly and logically from Hyelim’s pre-refrain before, it falls slightly flat in comparison to the preceding and succeeding verses, which is usually not a good sign if you are aiming for a big hit. It likely would’ve benefited from a more hook-like melody, or at least some added texture to make it pop out.

On the whole, Wonder Girls’ “I Feel You” takes what Wonder Girls did best in their glory days, executes it on a bigger scale than ever, and proves they’ve still got it. It also marks a successful transition in the group’s image from dance group to band, from idols to idols with more artistic freedom, from a more youthful image to a more mature one. Despite the many changes, the iconic group hasn’t disappointed with this comeback, and I’m looking forward to seeing how they proceed from here in the future.