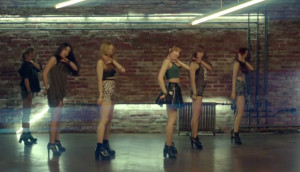 With all the guy groups who’ve come out with mediocre work over the summer, I’ve been yearning for a girl group I can give my interest to. With the teasers for Wanna.B’s latest single, there was a glimmer of hope. So I decided to give them a look-see. I wasn’t exactly excited when I listened to their debut single.

Now with a mostly new lineup, the ladies of Wanna.B return with a K-pop dance track they hope will keep fans of their original cast of females from jumping ship. Members J.bin (main rapper), Saebom (vocal and dance), and former leader Yoonseul were apparently fazed out, leaving Jiwoo as the only original member from the quartet. Their debut, “My Type,” while short-lived did garner them a great deal of attention domestically and in China. So it’s a bit shocking (though not necessarily unheard of) that 75% of the group that started up all the buzz was let go.

Following much of the same pattern as their popular debut, “Attention” is the typical electropop dance genre that K-pop is known for. There’s nothing particularly intriguing about the song in and of itself. It’s exactly what you’d expect from a group whose concept was sexy from the moment they debuted: our protagonist is unapologetic and arrogant. She’s sexy and she knows it, and she uses this self-awareness to seduce her man. In fact, she knows he won’t be able to resist her, and she uses that to get what she wants.

Though this isn’t a one-off in K-pop per se — a woman owning her sexuality and going after what she wants — it’s always good to see that ladies can sling that bravado around just as good as any man. That being said, this isn’t anything new or really interesting in terms of the way in which the statement is presented lyrically.

That lack of imagination bleeds over into the MV. However, instead of bemoaning the sameness of the video to every other sexy concept, I’ll point out those moments that were actually kind of interesting.

Opening on a silhouette, then flashing strobe lights on an elevated stage, not exactly groundbreaking, however it is refreshing to see how sexuality is represented here. The ladies favor a more subtle stab at scantily clad. While their outfits take more from the Mortal Kombat school of female empowerment (more skin than battle gear), the proclamation of sexuality is aggressive, not simpering. It’s not begging for oppa to touch, but be gentle. It’s more demanding he stand at attention because she’s about to teach him a little something.

The song’s writers and composers seemed to be working in perfect synch with the MV director(s), because the pulsating beat along with the almost confrontational lyrics play perfectly into this visual brashness. The ladies do show skin, but never in the video do you get the impression they’re trying to pander to a male’s libido. Rather they’re expressing their own sexual impulses, being as straightforward as possible, proclaiming, “I will have you.”

Though musically the song is the typical amount of exciting (a banger for those who just want to dance, boring for those who want to dance to something interesting), the first breakdown, in which new member Si Young gives us our first rap break (and is way more convincing in her rap than the group’s alleged rapper and remaining original member, Jiwoo), is actually pretty darn fierce.

It’s more than just the fact that it strays from the rest of the song, giving us a bit of dancehall in the midst of the electro. It also appears the song’s writers were throwing a bit of shade at AOA, using the signature “Like a Cat” dance moves and giving us lyrics insinuating the real bad feline is our female protagonist:

I’m a cat, whatever I get, I eat it all up
Attention, shh, can’t even talk to me
Man, I think I’ve had enough
You can know all of me but you can’t touch me
You’re like the moon, I’m a star star star

Though probably just a bit of a nod to a popular song in hopes of giving the track a bit more attention, I can’t deny I like the cheekiness of the lyric coupled with the dancehall riddim and the play on the dance itself. However, beyond that little bit of cheek, the choreography is, unsurprisingly, lackluster and unoriginal. This is rather unfortunate given the only original piece of the group is also apparently the group’s choreographer. If she did have a hand in creating the dance for this song, I can’t say I’m at all excited about what she has to offer in the future. 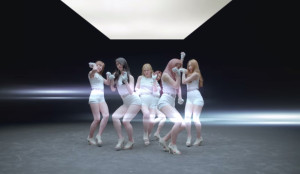 Beyond the few moments that caught my attention, the MV is your typical sexy girls dancing around in different settings in different outfits. While I applaud Wanna.B’s overall concept of sexy chic (yes giving us skin, but doing it in a way that’s ferocious, un-shy, and less awkwardly comic-book femme fatale), it’s really just a basic MV.

Does this lineup surpass the original quartet? It’s too early to really say. Neither song really appeals to me; however, “My Type” was at least more striking in terms of visual representation and concept. Vocally, again, too soon to really say. Neither song was really about showcasing anything “musical” in the sense of stellar vocals or even interesting music. So while the group does give us (seemingly) less forced sensuality, it’s still too early to say if there’s anything really worth staying around for, let alone worth recasting the entire group.