2NE1 And The (Racist) Definition of "Asian"

Hey, fellow K-pop fans: while we were all getting out undies in a twist about Taylor Swift maybe (not) copying 2NE1‘s “Come Back Home” MV and picking fights with Joseph Kahn, we could have been getting down to this sick  dance video… Before we saw the costume change halfway through.

This is a dance performance set to Beyonce‘s “Run The World” and 2NE1’ “I Am The Best.” It’s performed by The Fraternal Twins: 11 year-old Taylor Hatala and 14 year-old Larsen Thompson. The dance was choreographed by Janelle Ginestra, the video shot, edited and directed by Tim Milgram, and cameo appearances made by a few other choreographers and dancers, including Kyle Hanagami.

It also features Hatala and Thompson wearing crop tops based on the Chinese cheongsam, makeup ‘inspired’ by Japan’s geishas, and chopsticks in their hair buns. That the girls were mouthing “Maega” instead of “Naega” is kind of the least of our worries.

It seems that people still need to be told that East Asian cultures are not interchangeable; it’s a byproduct of a US-style racial grouping system that places Korean, Vietnamese and Indonesian people in the same category (while excluding South Asians); a system that does not give many people a reason to learn about, or even recognise the existence of, distinct cultures.

Dancing to IATB with “geisha” makeup and chopsticks in your hair isn’t cute or appropriate, it’s just stereotypical and plain racist. I mean, people behind this aren’t even pilfering from the right culture. This is what happens when you take your fashion cues from Katy Perry, everyone. It also makes other actions, like the V pose, appear just that bit more racist. 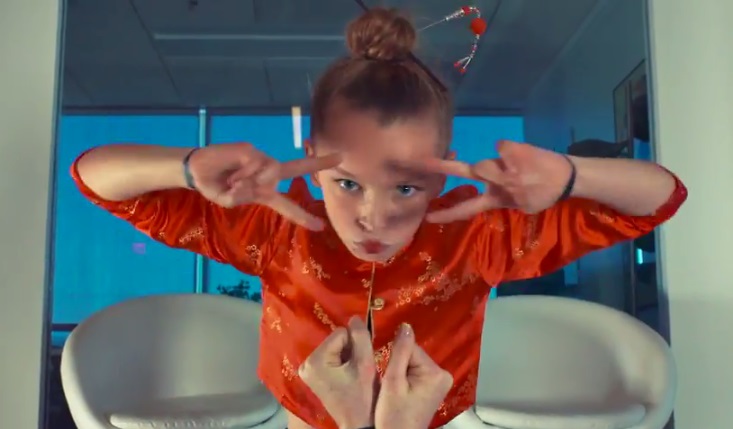 And there is no actual need to wear Korean clothing, or gisaeng hairstyles, either. Well, traditional Korean clothing; wearing clothes by Korean designers would have been pretty cool, actually, but it’s just not visually fetishising ~Asia~ enough to be a viable option, it seems.

Many people, including K-pop fans, think that the problem is that clothing worn isn’t culturally Korean; and that definitely is an issue. But there is also this ignorant line of thinking that often happens, where people believe they must go above and beyond to pay “respect” to a culture, just because they’re using a 10-second clip of a pop song from people of that culture in a dance video.

But once they’re called out on that ignorance, they find that the culture they are meant to be honouring isn’t really all that “respectable.” Tim Milgram responded to criticisms of the outfits thusly:

Just because the song came from Korea, doesn’t make it 100% Korean… K-Pop music is a fusion of American pop music with Korean lyrics. If they were dancing to traditional Korean music in Chinese outfits, that would definitely be offensive… but they’re dancing to something that was essentially borrowed from American culture to begin with. Their outfits are merely what the choreographer and costume designer agreed visually works for that moment in the music. Drawing the conclusion that it’s offensive is just an overreaction, because people online love to be offended by something since that’s much more fun to write a comment about.

So, Milgram demonstrates his understanding of how mixing cultures is a no-no when done by other people, before going on to defend the outfits in his video by saying that the Koreans borrowed American stuff first!

K-pop and Korean pop culture isn’t guilt-free when it comes to using other cultures as fashion, but to claim that the influence of mainstream American culture counts as much is as much of a stretch as claiming that Joseph Kahn copied a K-pop MV because he was born in South Korea. Someone please explain the nature of globalisation — which is just American neo-imperialism by another name — to this guy, and how wearing jeans and making Western-inspired pop music is an example of assimilation into the globally dominant Western culture, and not comparable to what his video is doing.

Meanwhile, choreographer Janelle Ginestra had this to say:

In regard’s to all the negative feedback about the outfit choice. It saddens me to think that people would honestly feel like I would try to offend a culture or race. I truly knew what choice I made and knew I was taking a risk, but wouldn’t think that people would be so viciously angry and aggressive about two young girls- dressing up in mock Geisha outfits. It’s a skort from top shop- a Chinese inspired crop-top, and chopsticks I have had since High School! Have worn them in my bun (as they did), and bought those at Claire’s. I wanted to make an outfit change and do something different and impactful. I see visions in my head and go with it. You can’t please everyone. Regardless of what we do as artists- some one is always going to have an opinion and something to say. I just don’t want these girls getting attacked because of an artistic choice I made. Please understand this wasn’t to offend anyone. Peace and love.

So apparently, the clothing choice was a “risk,” but not because it was racist. Ginestra believes that she wasn’t doing anything racist because she wasn’t consciously trying to. However, one doesn’t need to put much effort into being racist, because it is so inbuilt in our society that it’s as easy as buying “chinesey” crop tops and “hair chopsticks” from a Western shop. It is a real shame that Janelle Ginestra, like many others, does not (yet) understand this.

Milgram even went as far as to make the offending outfits the screencap of the video. Either he is so incredibly ignorant of his own latent bigotry and is actually proud of this bastardisation of cultures, or he knows he’s a bigot and is intentionally trolling us all for more views and publicity. Whatever the reasoning, the fact remains that all the hard work put into this video has been cheapened by the display of racism, and the attitudes that both led to and are defending it.

But none of that matters right now to Milgram, Ginestra and everyone else who sees no problem here. In the sea of articles raving about the two pint-sized dancers, very few mention 2NE1 at all, let alone the insensitive outfits, though this may change in the coming days. Furthermore, Minzy has reposted the video on her Instagram account, with positive comments.

Despite the fact that Asians living in Asia have a very different relationship with visually expressing their culture to Asians living in Western societies, Minzy’s post could be read as a silent endorsement of the messy outfits — regardless of Minzy’s actual thoughts on them, if she had any at all. Poor girl was probably just trying to do YG’s job of promoting her and her group.

Ultimately, the problem with this video is two-pronged. The first is lumping together the vast array of Asian cultures into a monolith of Korean, Chinese and Japanese; and the second is the apparent inability to not exotify and anything Asian. And the sooner people learn to not do either of these things, especially in order to not be racist, the better for all of us.