Better Than T-Swift: How To Derail, The K-pop Way 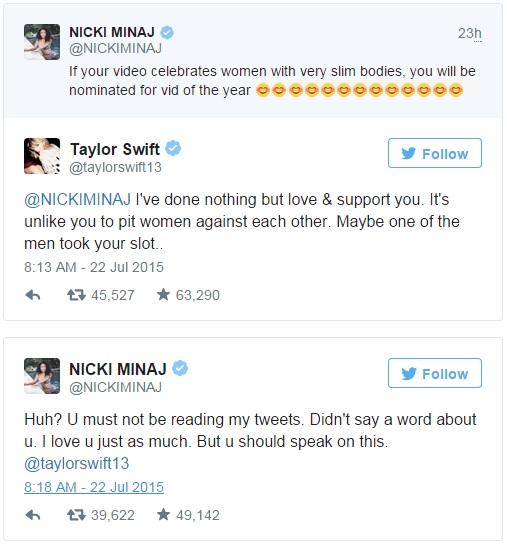 You know what’s funny? All the 2NE1-related things that went down this week did so on/around the 21st of July 2015. There was a dance cover on YouTube with offensive costuming and another dance cover that was on So You Think You Can Dance, but in this article I am going to focus on the big kahuna, in the eyes of the public: the backlash against Taylor Swift, and how 2NE1 got caught up in it.

It all started with Nicki Minaj tweeting her displeasure at “Anaconda” being snubbed in the Video of the Year category for this year’s upcoming MTV Video Music Awards (VMAs). Minaj argued that “Anaconda” had charted too well and broke too many records to be ignored. She also implied that the snub was because “Anaconda” rejected the American beauty ideal — which is more likely to be achieved by a slim, White woman than by the dark and voluptuous Black bodies celebrated in “Anaconda.”

But when Nicki mentioned slim bodies in her Twitter rant, Taylor Swift — who happened to be nominated for Video of the Year with a MV filled with slim women — felt targeted, and entered the fray. Her new-found feminist good intentions, though, were met with a “Huh?” from Nicki and a walloping from the World Wide Web, which pointed out how Taylor’s feminism was more white — and self-serving — than intersectional.

Swift’s only other comment was a patronising invitation for Nicki to accompany her onstage if/when she converts one of her own nine VMA nominations into a win. TayTay has since apologised, though, for misreading the situation to be about her, and Nicki has accepted it.

And in between all the dragging of Swift that was occurring, someone on Twitter decided to come for the “Bad Blood” video itself, claiming that it was a copy of 2NE1’s “Come Back Home.” This wasn’t the first time the claim has been made, and the screencap making the rounds makes a convincing case for this claim:

@NICKIMINAJ can we talk about how taylor’s video isn’t original and was copied from a group of four WOC, 2NE1 pic.twitter.com/LPtJzBHvAD

But those who have watched both videos will know that the similarities begin and end with the themes of sci-fi and vengeance. Each MV is still its own separate entity that draws on different influences: “Bad Blood” is a slick action-spy flick training montage while “Come Back Home” sticks to dystopia and taking down the Matrix. And both MVs display sci-fi tropes featured in many films, including Blade Runner, The Fifth Element, Tron, The Matrix and  Inception, among others.

Honestly, though, I just can’t get past the stupidity of it all. I’d much rather tell you which MV of the two is superior, and why, but then Taylor would probably tell me off for pitting women against each other.

Fortunately, though, we need not rely on my indifference to answer the important question: Did Taylor Swift’s “Bad Blood” copy 2NE1’s “Come Back Home” MV? Jezebel has found the link connecting the two pop acts: “Bad Blood” director Joseph Kahn. Two alternate possibilities are posed; the first is based on Kahn’s overall body of work:

Looking at his videography, clearly Kahn is no stranger to crafting stylish, futuristic-looking clips, nor is he afraid of packing a long narrative into a quick, five-minute video.

While the second is based on Kahn’s, um …

… [I]n November, he spoke with the Korea Times about getting back to his “Korean roots,” and that he “pay[s] full attention to what’s going on in my field, it’s my job.” It seems highly unlikely that any storied, thorough music video director would have missed a high-profile video from arguably K-pop’s most celebrated girl groups.

Making a claim like this based on a person’s ethnicity and not much else is a big stretch. What’s worse is when this conclusion was made using information taken out of context, as Kahn himself explains in his response to the Jezebel piece:

I need to lodge a complaint against an article you posted about me where the writer accused me of plagiarizing a Korean music video on Bad Blood. 1. I never saw that video and 2. all of the comparisons are common sci fi tropes – city, cars, helmets, body scans, flares – all recropped without context. Furthermore recording screen grabs and accusing others of copying their groups is apparently a very common hobby of Kpop fans. If you view both videos, aside from the uncontextual limited screen grabs, you will quickly see they are completely different videos.

But an even more questionable tactic of your writer is where she accused me of likely copying because of I am Korean born:

I never said I was going back to my “Korean roots.” The article she is mentioning is here:

The Korea Times author wrote “Roots” in the title in context of questions he was asking about my family. There is never any mention of Kpop in the article. The quote about “my attention” is in context to the business structure of my field:

The implication your writer is making is explicit: I am a foreigner born overseas and I am trying to reconnect with my birth country and have obvious motive to copy it.

I do not listen to Kpop. I am American. And this is an unethical, slandering article.

The last line has been up for re-interpretation. I took it as Kahn addressing each of the claims made about him. He is saying that there is no way for him to have come across the 2NE1 MV as he does not listen to K-pop; and that he does not consider himself to be a foreigner living and working in the US, but an actual American.

But others have seen it is Kahn saying that he doesn’t listen to K-pop because he is American, and have derided him for his ignorance. But even if this was the case, and not a matter of ambiguous-cum-poor sentence structure, I would say that the way migrant Americans deal with their hyphenated identities, constant othering and denial of their identity as a “proper” or “real” American — regardless of how you feel about how it is dealt with — is a bit different to an ignoramus saying they don’t listen to non-English music because this is America, dammit!

Getting back to the Jezebel article, though; and regardless of my thoughts on the rest of the piece, I must applaud the author, Julianne Escobodo Shepard, for bringing the discourse back to the issue Nicki Minaj was attempting to raise in the first place:

[N]o matter how popular Minaj is now or will be, she will likely never receive the same respect as her white peers, women and men alike, unless there is systemic change within the music industry and, to a larger degree, the whole stupid culture.

And this is what frustrates me the most about the entire circus show I just recounted: the original issue of how Black women are treated by Western music industries ended up being disregarded for lamenting the plight of non-Black WoC entertainers. This is like the K-pop version of #alllivesmatter, where the serious issues and even dangers Black people in particular face are drowned out by cries of “Us too! Us too!” despite evidence to the contrary.

This is not to say that the problems faced by Asian people, and Asian entertainers in the US, are less important. But each group faces its own unique issues — like police brutality and the model minority myth — and when someone is talking about the specific prejudices they face, it’s in all of our best interests to shut up and listen.

During the time we K-pop fans could have spent listening to Black women (not just Minaj, but others too) and learning from their experiences, we’ve instead acted like we typically do and thirsted for some mainstream media attention to K-pop — which we got thanks to writers who are also K-pop fans! Basically: we have succeeded where Taylor Swift failed, in making the conversation to be about ourselves.

When I first saw the tweet claiming plagiarism, I thought that it was just trying to highlight 2NE1 while joining in on the massive dump the internet was taking on Taylor Swift. Never did I imagine that it would grow to the extent that even Korean netizens would be weighing in.

Look, I’m happy that 2NE1 is actually getting some publicity — so is Papa YG, he didn’t even have to do anything this time! — but I’d rather this was achieved without derailing conversations we should be having.