Sistar Displays Anguish and Strength in "I Like That"

It is officially K-pop summer, as Sistar has come back with their annual offering. Last year’s “Shake It” was a low for their summer singles, feeling like a rehash of “Touch My Body”, itself a rehash of “Loving U”.  However, “I Like That” is a powerful break from the norm for both Sistar and summer. Furthermore, “I Like That” takes that break and thrives in it.


“I Like That” is not a peppy fun song tailor-made for blasting out your open windows in the summer sun. It’s moody, melancholy, and jazzy, built around a somber alto sax line. That alone gives “I Like That” a serious boost in my books, as the saxophone makes everything better. The whole song simply resonates with power, the result of a driving beat matched with the sultry vocals of Hyorin, Soyu and even Dasom.  “I Like That” is exhilarating in how it revels in the anguish of the music.

That heady mixture of anguish and power is carried through in the lyrics of “I Like That”.  Sistar sings about the drama of falling in love with a player, but with a more mature perspective. They never believed it when their playboy boyfriend told them he loved them, and are more angry at themselves than him, because they knew what he was when their relationship began. Yet even with that clarity and that anger, Sistar’s favorite words, the ones they like so much,  are “I love you”. As much as they’re consciously casting off their cheating ex, right now, they hurt. 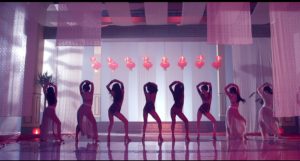 That pain is only enhanced through the MV and its clever use of symbolism. While most of the Chinese aesthetics are simply set dressing, there is an exception with the plum blossom. The plum blossom is a recurring element, appearing in many small ways that add up to a prominent motif. It appears on Hyorin’s wrist; a plum tree is on Dasom’s back; and the MV is almost entirely pink and red, the color of plum blossoms. Sistar effectively are plum blossoms, a metaphor matches the song quite well.

As plum blossoms bloom in the winter, they are a common symbol in Chinese literature for strength in adversity and the ability of life to endure anything. Furthermore, the plum blossom is just as often a symbol for female strength, as they are small and appear quite delicate, but are able to thrive in some of the harshest conditions. Sistar is clearly drawing on the strength and resilience of the plum blossom to resist the desire to return to their former lover, as they still love him despite his past behavior.

Strength is not the only element emphasised by the MV for “I Like That”, but anguish as well. The poem on Dasom’s back, accompanied by a plum tree, is “Autumn Air” by Li Bai from the Tang dynasty. It speaks on longing and how long it can last. More relevantly, “Autumn Air” speaks about how even a solitary moment of longing can feel like eternity while you’re in it. 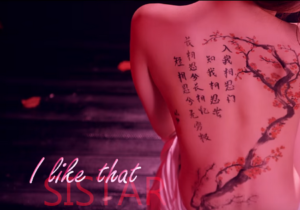 “I Like That” is caught in the moment where it’s accepted that the relationship needs to end, but the love has yet to fade. Sistar is clearly feeling the desire to go back to their ex, missing him, celebrating the time spent together, but they are holding strong.

“I Like That” is the antithesis of Sistar’s past summer releases, and it is all the stronger for it. They have broken free from their patterns of harmless fun, and released a track that is poignant, heartbreaking, and breathtaking.