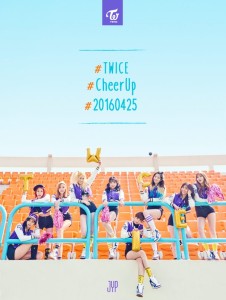 2016 has been an interesting year for the K-pop world. There is change on the wind: newer groups usurping their seniors, music diversifying in unexpected ways, rookies establishing their own sounds. The landscape is shifting, and the taste of time is on everyone’s tongue, and nowhere is that clearer than in the best comebacks of the year, which are dominated by newer acts.

Comebacks are tricky things to evaluate. They are the culmination of all the pieces — the song, the MV, the album, the live stages, the dance — but the true strength of a comeback lies in the feeling that I need to experience this, or I will regret it, and Twice nailed that with “Cheer Up”.

The MV is a bright, satirical love letter to cinema that simultaneously flaunts each member’s charms. The high-energy cheerleader choreography furthered Twice’s image of quirky sweethearts; something cemented by Sana‘s “shashasha” reaching meme status. “Cheer Up” proved Twice has what it takes to carry on past their explosive debut.  They’d probably be higher on the list if I didn’t loathe “Cheer Up” the song with every fiber of my being.

Perhaps, though, you’re more interested in the substance than the style. In that case, I present AkMu. “Re-Bye” and “How People Move” were vastly different perspectives on life. “How People Move” is embroiled in the childlike wonder of the mundane, a focus on the tiny details of something so ordinary as human movement, while “Re-bye” is a kiss-off tinged with maturity, a removal of a toxic influence with flair. The MVs for both are brilliant; bright, stylized, and slick. The toy wonderland enhances the whimsical magic of “How People Move”, while the noir mystery melds flawlessly with the jazz edge of “Re-Bye”. However, their disparate tracks were so far apart in their maturity levels that it brought down AkMu’s comeback as a whole, giving them an unstable image. 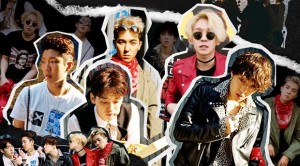 Winner made their first comeback this year as well, with the somber “Baby Baby” and sardonic “Sentimental”. Like AkMu, the MVs were flawless matches to their music. “Baby Baby” resonates loneliness, revealing just how lonely it is in the spotlight, putting their wounds on full display, while “Sentimental” took a more cheeky, pastel route to expressing Winner’s isolation. But what landed them at the number three slot was Exit:E, a remarkably strong mini that will be showing up on other mid-year lists. The motif of loneliness resonates through the album via a rock lens, each track bringing a new perspective to that same topic. Tracks like “Sentimental” and “Immature” revel in it, while “Pricked” and “I’m Young” bring a more somber taste. Anyone who’s ever felt alone can find a kindred spirit through Winner.

While Winner impressed through their serious look at life, Mamamoo impressed through their sense of fun and irreverence towards anything weighty. Their first album, Melting, is full of silly, breezy songs like “1cm (Taller Than You)”,”Funky Boy”, and “Recipe”, all in Mamamoo’s signature style of retro-pop paired with phenomenal vocals. Yet what really clinched their place on this list was their live performances of “You’re The Best”. Many groups thrive on either performance or technique; putting the effort to master showmanship or vocal techniques. Twice and AkMu are performers and technicians, respectively. Mamamoo is both, in spades. Every time they took to the stage, they wowed the audience with their charisma and vocal chops, paired with unending energy. 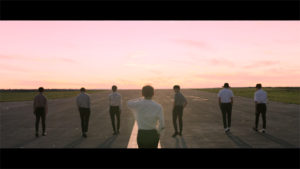 So, who had what it takes to secure our number one spot? The right combination of music, choreography, performance skills, and music videos? BTS, that’s who. Yes, the number-one slot went to the group who came back with a remix album and who only promoted for a week, because they were just that good.

“Fire”, “Young Forever”, and “Save Me” melded seamlessly into the existing tracks on The Most Beautiful Moment In Life, and the remixed tracks were handled brilliantly. The song order and remixes were done with respect to the originals, yet breathed new life into the tracks. This was a project that was undertaken with utmost care by BTS and it shows. The new tracks are not rehashing of their already existing songs, but songs that pick up and further the confusion, depression, and exuberance. The MVs for all three new songs were made with just as much effort and dedication — read as symbolic what-the-fuckery — as “Run” and “I Need U”. BTS didn’t just come back, they issued an unspoken challenge to everyone else in the K-pop world: this is what we do for a week-long promotion. What can you do for a month?

What comebacks were your favorites? Did I lose my marbles with this list? Leave your thoughts on 2016’s best comebacks in the comments!