Akdong Musician is finally here with their long-awaited comeback! Bursting into the K-pop industry with their victory on the second season of K-pop Star, the sibling duo is just full of pleasant surprises as they continue to impress with their latest track, “Re-Bye”. Alongside a second title track, “How People Move“, “Re-Bye” headlines their latest mini-album, Adolescence, which comes a long two years after their last album in 2014, Play.

In these two years of absence, AkMu has blossomed. Although their musical style remains largely similar to two years ago, it is clear that both Chan-hyuk and Su-hyun have grown to become more confident and their unique musical style, previously established with Play, is now firmly rooted in their musical identities. With “Re-Bye”, the duo manage to show off, once again, their chemistry and synchrony both sonically and visually, bringing to us a very aesthetically-pleasing track.

Both in terms of its music as well as the music video, there are some very clear influences from the 1940s. The song begins with Su-hyun crooning to a solo, jazzy piano accompaniment. She slides effortlessly from note to note, and between her chest and head voices; once again reminding fans and non-fans, alike, just how unique her vocal quality is. With an interesting balance of power and warmth, Su-hyun’s voice easily attracts and keeps the listener’s attention.

After the first chorus, the cabaret influence previously lurking in the background is brought into the spotlight with the change in rhythm as well as in instrumentation – the prominence of the drum kicks and cymbals being the main contributors to a rather cabaret-like atmosphere. Chan-hyuk also makes an appearance with his rap verses before going back to singing in harmony with his sister.

Although this musical structure seems to be a constant in most, if not all, of AkMu’s songs, it works curiously well for them — Chan-hyuk’s rapping style and vocal timbre is very much complementary to Su-hyun’s voice. And so it is over this groovy, vaguely ’40s musical sound that AkMu sings, allowing for the layers to mesh into a coherent entity that is very pleasing to the ears.

The lyrics, when read in isolation from the music video, reveal two main themes. Firstly, it tells of yet another break-up, yet another goodbye, and yet another let-down, but at the same time, it also alludes to the idea of being misunderstood and of being different from what appears to be on the surface.

I’m used to it, the footsteps coming and going, the goodbyes

Although set against a rather upbeat and catchy tune, the lyrics are surprisingly despondent and pessimistic, and it is this juxtaposition of the lyrics and the music that highlights the idea of masked appearances. At the same time, it also brings out a certain air of haughtiness and indifference, giving off the impression of the singer trying to mask his or her true feelings of despair by being blase.

When the song is set against the music video, however, an entirely different narrative is made apparent. Although it is not uncommon for songs to have an irrelevant storyline in relation to the song, AkMu has surprisingly succeeded in creating a parallel narrative in its music video that ties in rather coherently with the theme of the song. 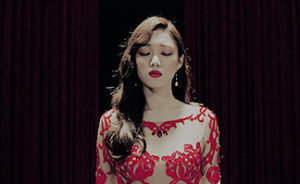 The video starts off by introducing the audience to Su-hyun as the personal assistant of Lee Sung-kyung, who appears to be some kind of celebrity singer-actress. Meanwhile, Chan-hyuk features as one of the back-up dancers. As the video progresses, it appears that the pair of siblings are wannabe stars who are jealous of Lee Sung-kyung’s popularity and plot to kill her through various schemes including a falling chandelier and real bullet in place of a blank during a performance. These are ideas commonly found in dramas or in movies of the ’40s era, and further helps the listener create connections between the video and the music that he or she is hearing.

The audience soon realizes, however, that the siblings are not who they appear to be. As Chan-hyuk raises his gun in sync with the other actors, he abruptly switches his aim towards a sneaky-looking back-up dancer and as he fires his blank, she shrieks and crouches down. It is then revealed that this female dancer had been the one trying to murder Lee Sung-kyung, while Su-hyun and Chan-hyuk are, in fact, detectives who were tasked to find the perpetrator. This definitely explains the magnifying glass the Chan-hyuk was waving around, seemingly randomly, during his rap.

All in all, the music video was very well-directed and although it conveys a rather different meaning from the song lyrics, it can be seen as tangential to the theme of masked appearances and being misunderstood. In this case, then, even if the music video does not match up with the song lyrics, it manages to generate interest and keeps the audience curious about the narrative. It also manages to, to a certain extent, enhance the meaning of the lyrics but offering a peripheral interpretation. Most of all, the setting and styling in the music video is extremely helpful in ensuring that the listener is able to see the retro influences in the music, helping them see and hear the music and the video as one congruous product.

So overall, “Re-Bye” does not disappoint at all. AkMu has proven themselves, once again, to be musicians that produce high quality work and more importantly, musicians that have been able to develop their own stylistic direction and articulation. As a title track of their second mini-album, “Re-Bye” manages to cement AkMu’s artistic style as well as their place in the K-pop industry. I do hope, however, that in their next comeback (whenever that may be, considering Chan-hyuk’s upcoming enlistment and the general trend of YG Entertainment), AkMu will be able to bring something different to the table, rather than sticking to their usual solid, but safe, musical choices.

What did you think of “Re-Bye”?