Taeyeon's Talent Truly Shines In 'I' 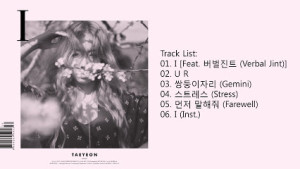 Girls’ Generation has dabbed into different themes while still maintaining mainstream K-pop. Their debut started with a hard-working and never give up image with “Into the New World” and turned bashful in “Girls’ Generation.” From there, they settled on cute with “Gee” and moved to confident with tracks like “Run Devil Run” and “The Boys.” Things got weird when “I Got a Boy” came around, which is typical when an artist tries something new. Now, a mature stage has been hit with “You Think” and even “Lion Heart.”

When their leader, Taeyeon, released her solo album, I, some expected it to sound like stereotypical and generic K-pop or even like Girls’ Generation without all the other girls. This album was everything but that. It was meant to sound different and not comparable to anything the group could produce and release.

Sharing the same name as the album, “I” is a powerful track both lyrically and vocally. The words resonate with the listener, telling the familiar but modernized story of The Ugly Duckling by way of Verbal Jint’s rap and expanded on with Taeyeon’s singing with an Alanis Morissette vibe.

Taeyeon’s voice is strong, but doesn’t dominate the peacefulness of the melody. It makes one think that this genre is better suited for her voice. SNSD would probably not able to put out a song like this for it would sound too different from what fans are accustomed to. Not to mention, the other members’ pitches would more than likely not work well for this sort of field.

Next, “U R” slows down the pace and serves as a dedication track. As for answering, ‘to whom?’, there’s no particular party mentioned. A friend, lover, family member, pet… the choices are endless. The song is to someone important and precious who abdicated the feeling of loneliness, and replaced it with security, peace, and hope.

Cause you are, the light that fell on me
You are, like a beautiful dream
With seven rays, the whole world,
Is dyed even more beautifully, always
Yeah U R

While Taeyeon’s vocals shined in the previous track, they really come into the light in this one. It may sound like she’s singing over the music, which is soft to begin with, but that sort of tone works considering the emotional and important message behind the lyrics. To get a point across, there needs to be a strong delivery. 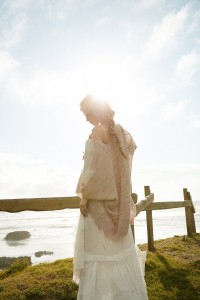 It was only matter of time that a post-break up song would find its way into the album. “Gemini” is a true R&B relationship fall out track. This works because when autumn and winter come around, it’s the perfect time for Ballad and R&B artists to shine.

Two people being alike and together in happiness when suddenly something in the relationship goes wrong. Usually Geminis are known as two parts of a whole, but the sign itself is sometimes seen as two-faced to others. This would explain how Taeyeon doesn’t have a point where she explains what went wrong and how to fix it. She just notes that something changed, she reflects on the good moments they had, and wants the significant other to come back to her.

Needless to say, there are those believe this song is about Baekhyun of EXO and Taeyeon’s relationship, or now, lack thereof. Had the song been written by her, it would make sense, but it wasn’t. So this song isn’t necessarily about their relationship: Taeyeon is just the conveyor of feelings for the songwriter.

If you’ve gotten comfortable with the slow tempo of the the album thus far, prepare yourself to be thrown into an upbeat track that might even sound out of place. After this, you’ll soon find out it’s the only fast paced song on the album.

“Stress” is the prologue to “Gemini” since despite its name, it’s a song about being lovesick. Heart palpitations, uncontrollable feelings, sleepless nights, being lost in thought… All those things you should probably see a doctor for but never do, because you know what the problem is: love.

If the vocals were switched with Taylor Swift, I probably wouldn’t notice. If this song is comparable to any American artist, it would have to be her. It doesn’t sound like any particular song by Taylor Swift, but it resembles of some of her earlier tracks and it’s not a far cry from what the singer is capable of releasing.

This song makes me feel that Taeyeon’s stressing her voice (no pun intended). The higher pitch works for the composition; but it sounds like she’s forcing herself to hit the highest points, which results in sounding like she’s screaming notes instead of singing. 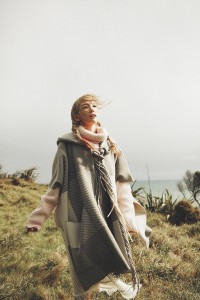 Finally, we are graced with a track with a title appropriate to its placement, “Farewell.” The piano and subtle string instruments give the song a musical theater vibe. It closes the two songs that came before it: “Stress” with lovesickness and being in a relationship and “Gemini” with the break up and not knowing what to do now that you’re on your own. “Farewell,” reflects on words that should have been said or expressed during the time of they were together. In addition to that, it’s taking the falling out as an experience. It’s a song of getting over the relationship, doing things for the last time, and having closure and saying goodbye to that point in your life.

Overall, I found this album to be complete ear candy. Its image is completely deviant of what’s expected, it was meant to be that way, and I like it. I’m all for artists using solo albums to express themselves as much as they can. Most times, you’ll wind up hearing a different calling for them.

My only gripe and what takes away from this album is the irregular usage of the English language, with phrases like “My life is a beauty” and “I’m in stress, baby.” is wrong as well. They are distracting, especially for those who have English as their first language. The proper usage rules have been drilled into our heads through constant use.

Otherwise, lyrically, this is a solid album. There’s a lot of hidden but strong meaning behind all of the lyrics, especially in the slower tracks. Taeyeon’s voice is comfortable to listen to, taking you on a journey of life. If there is a timeline put to the tracks, it would probably be “Stress,” “U R,” “Gemini, “Farewell,” and “I.”

I don’t follow Girls’ Generation too much. So while I’m not an admirer of the group, I am definitely a fan of this album. If you want to give your ears something new to listen to, Taeyeon’s I will do the job. Ranking number one the World Albums chart and receiving an All-Kill on Korean and on other international charts during its release has to say something.

Readers, did you enjoy Taeyeon’s album? What’s your favorite song?