GFriend And The Rewarding of Slip Ups 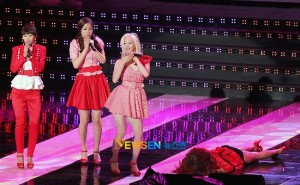 Once upon a time, I wrote an article about the unplanned events that occur during live performances; from the fun side games of rock paper scissors, to the handling of annoying microphone troubles, to the time DMTN‘s Daniel got punched in the face (accidentally, mind you).

When K-pop seeks absolute perfection by choreographing each turn and wink in a routine, and idols practice incessantly to perform without even a hair out of place, these spontaneous and unexpected events are a novelty in otherwise predictable live performances. They are witnessed, giffed in every which way, and even go down in fanlore as events worth remembering — or at least a look-up on YouTube.

But, none of these prior events have blown up like G-Friend‘s slippery performance of “Me Gustas Tu” at the outdoor Hyundai Eco-driving Concert held by SBS Radio a fortnight ago. In the middle of a downpour (and a collection of moths), the ladies of G-Friend had to perform on a slick stage. As expected, members did slip as they performed their energetic routine. What wasn’t as expected, and what made this incident go viral, was how severe the falls were, and how often they happened.

It was at the point where minor slips through which the members managed to stay upright weren’t counted, with many concentrating instead on the tumbles that brought the girls — SinB and Yuju in particular — to the ground multiple times. By the end of it all, leader Sowon was thoroughly pissed and couldn’t get the group off stage fast enough. And fair enough: in these situations, there is always the threat of injury that needs to be considered against the desire to give a good performance.

Though, is any proper consideration given in this situation? After all, so many idols have performed in similar conditions; what’s one more group? Especially when said group is a rookie from a new, small agency that debuted this year and is only on its second single. So, even if there were misgivings about performing on part of the idol, they would not be acted on; the show goes on. As for the organisers… You know they’re not giving this kind of thing a first, let alone second, thought. There have been so many instances of poor safety and management at K-pop concerts that it has become a hallmark of Korean event organisation.

In fact, you can tell that there is an imbalance when you look at the fact that I talk about G-Friend displaying professionalism instead of the organisers. At the very start of the video, you can see a staffer in a rain poncho quickly exiting the stage. If you have the time to protect yourself from the rain, why not also spend some of that time on clearing the stage of puddles? Or delaying proceedings until the rain stopped? Or put into place some kind of contingency plan that the organisers had already organised because thinking ahead and preparing for different eventualities, like bad weather, is something event organisers are meant to do? Instead, a member is left to try and kick the water away before she kneels down in her start position. 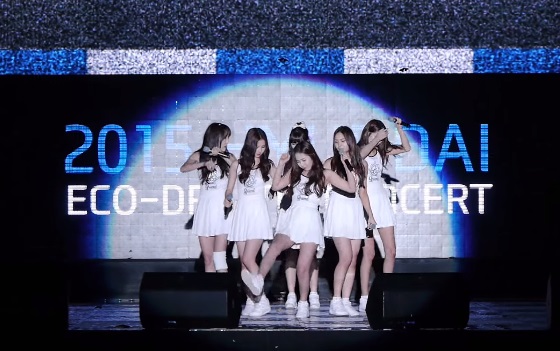 So, G-Friend takes to an increasingly wet stage for a wild performance… And the internet goes berserk. To date, the publications that have covered this incident include big names like Billboard, The Daily Mail, Time, The Mirror and Mashable, among others. But the question is: why? I wrote a whole article on instances like this because I am all about that sweet, sweet schadenfreude; and these publications are no different.

Sure, with headlines like “This Video of a K-Pop Singer Falling 8 Times in 1 Song Will Inspire You to Keep Going No Matter What,” we may think that G-Friend is being used as a feel-good story about perseverance; but the focus is still on the actual, y’know, falling. We are invited to watch these young girls take tumble after tumble, and then read a sentence on how Yuju deserves a raise mixed in with the usual Introduction to K-pop. Considering how articles with positive headlines generally get read more than those with a negative slant, this is not surprising; it’s the same schadenfreude, but wrapped in a layer of feel-good emotion.

Meanwhile, we international K-pop fans work ourselves into a mild frenzy because mainstream media is paying attention to K-pop. And the Korean media, likely embarrassed by the international attention towards this mishap, was quick to denounce the organiser and the system.

One of the opinions expressed is that a more senior group like SNSD or Kara would not have been subjected to these conditions. I guess SNSD’s run-in with smoke inhalation at last month’s DMZ Peace Concert doesn’t count; nor any of the other times SNSD, Kara and other senior idols have been subject to harsh conditions. Or, say, every other SMTown concert. Let’s also not forget the Hallyu Dream Festival that happened this weekend, and how top group Sistar suffered just as much rookies Oh My Girl and DIA did, if not more so. The only real advantage more senior idols may have is experience, which could give them a better idea of how to deal with crappy situations like these; and even then, it doesn’t seem to help much.

Fact is, the video above is more of an anomaly than anything — we’re more likely to see news reports about fans getting outraged over such things than hearing members of the media itself expressing that outrage. It can be said that the only reason it’s happening is because of G-Friend’s plight went viral and effectively embarrassed the local media into saying something. Otherwise, who cares? These same broadcasters who are dumping on SBS today are likely going to hold a concert with similarly shoddy conditions that idols have to perform in; so they certainly don’t. All that’s left are the fans, any members of the general public who care enough to be upset, the idols and their loved ones. 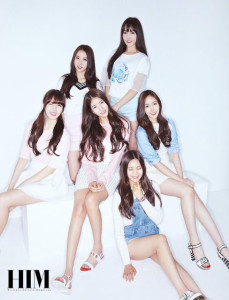 Even then, there is still something to sweeten the deal. Generally, the idol is praised for their hard work, perseverance and general lack of complaining; but in G-Friend’s case, there are a lot more apparently positive outcomes. The South Korean government gets K-pop — the industry they’ve been funding for years — into the global spotlight and thus worth their investment; fans see their faves — and K-pop — become the topic of discussion and see the chance to convert more innocents to idol worship; and the G-Friend themselves gained some much needed attention in an overcrowded market.

It can even be said that the viral success of this live performance is what led to G-Friend’s recent nomination as Best South Korean Act for this year’s MTV EMAs — the same category that led to Big Bang‘s win at the 2012 awards. Among a rather youthful category (2011 debutante B1A4 is the most senior nominee) G-Friend is the only girl group nominated. Whether their notoriety will carry the group further, and closer to the awards ceremony in Milan, remains to be seen. But will the pain and risk to personal safety be worth it for G-Friend?

If an idol and their group becomes famous for a monumental slip up on stage, then so be it; accidents happen, and unexpected and novel incidents, including falls on stage, make performances less predictable, and thus more exciting for the viewer. But that shouldn’t be used as justification for the poor conditions presented by concert and event organisers. And they should not become the norm: with the lacking management of adverse weather and other occurrences at many events, including Korean-organised ones, remaining the same, it becomes more and more likely an idol is going to slip, fall and/or be injured in some way. And if that kind of eventuality becomes de rigeur… That would be a much scarier thing than someone who really enjoys a good prat fall.