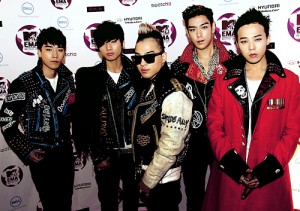 First off I need to thank you for deciding to add the Worldwide Act award to your show.  With the internet making the world a smaller place, music from around the globe has become accessible to people everywhere bringing the gift of musical variety to fans across the world.  It’s what gave me access to my favorite K-pop band Big Bang.  And while there were many talented and deserving individuals and groups nominated for this award and I feel bad that not everyone could be a winner, I do not regret that Big Bang won because they just might have been the act that needed it the most.  They had been going through a rough spot this year, even though they had survived 5 years together and were about to celebrate 5 more with a brand new and much anticipated album after almost two years–2011 was gonna be Big Bang’s huge comeback year.  Then half way through the year accidents happened, scandals struck, the boys who were so high at the beginning of the year sank to a new low, and fans were despondent over their fate.  But then the nomination for your new award came and there was hope.

And with that grain of hope VIPs, the name of Big Bang’s fans, mobilized and strived to get Big Bang a win for the Asia/Pacific nomination because they knew a win on such a large scale could be just the boost that they needed to regroup, the stimulus they needed to once again Stand Up proud on stage after misfortune hit.  So VIPs voted, and voted, and voted.  I’m sure you saw the numbers and were surprised 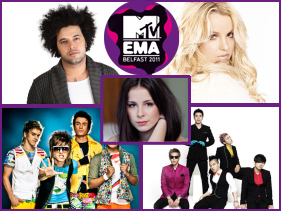 because there’s a chance that you never heard of Big Bang before.  But you don’t know K-pop fans–their devotion, their love for their idols… it’s sometimes scary.  And once Big Bang won their region, fans knew that they were one step closer to seeing G-Dragon,Taeyang, T.O.P., Daesung, and Seungri on stage once again.  So the voting began again, and fans from other K-pop fandoms helped out because a win for Big Bang on your stage was a win for K-pop because if these relatively unknown idols from South Korea could win, K-pop would be thrust forward into the limelight.  And that would bring all of K-pop closer to international fans who were growing exponentially, everywhere.  But to win they had to surpass other great artists from across the globe:  Abdelfattah Grini from Morocco, German songstress Lena, Brazilian boy band Restart, one of the the US’ foremost pop princesses, Britney Spears–no small feat.  But fans didn’t give up so they voted, and voted, and voted.  As the votes came rolling in, I’m guessing you were flabbergasted–who exactly were these guys?

I hate to criticize, but I do have a few things to say.  You touted the new Worldwide Act award as a way for fans across the globe to vote for their favorite local artists from their region.  Also that, “The Worldwide Act category celebrates diversity and the breadth of all the music that MTV has to offer by nominating incredible artists from all corners of the world.”  On paper it sounded really great, but in reality the honor, while still great, was more of a passing whim.  Because other than a page on your site where fans could vote, you didn’t give these artists much respect or exposure.   There was no hype surrounding the artists or award, did anyone even know who they were when any of them walked the red carpet?  I guess it wasn’t your fault if they didn’t, but you could have done a special interview of these Worldwide nominees or something because I’m 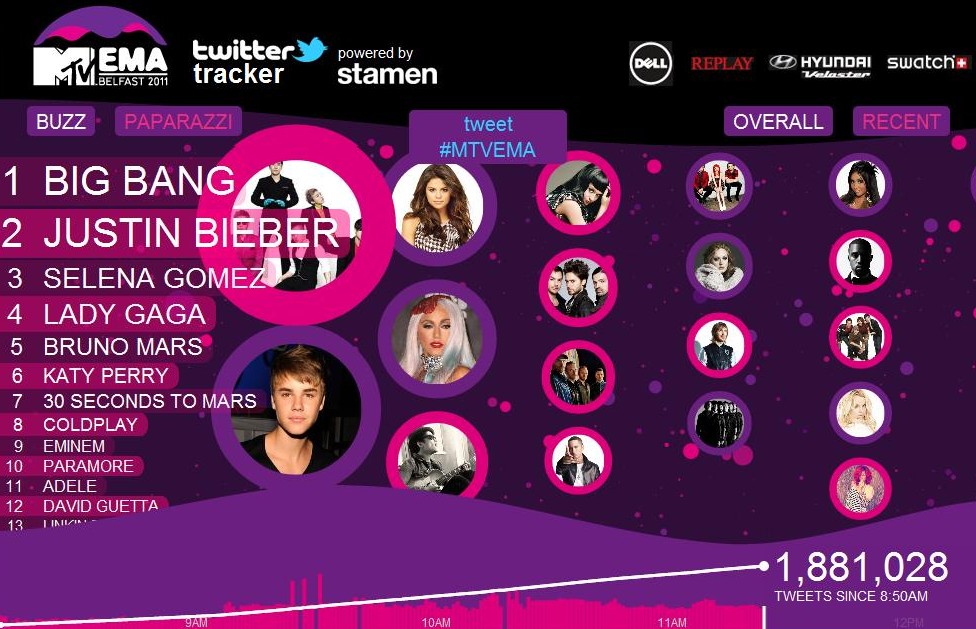 sure other than Britney Spears only a token of people at your awards knew of these artists at all.   Where was this ‘celebration of diversity?’  Especially for the inaugural year of the award, don’t you think that maybe you should have let each of these Worldwide acts perform, or even just have the winner get a spotlight performance after accepting the award?   If you really wanted to bring music from around the world to your audience, shouldn’t you have?   Love  Selena, but one or two less behind-the-scenes skits or taking out the bit with the streaker talking to Hayden Panettiere so you could have a performance by the winner of your very first Worlwide Act award would’ve been so much better.  And I’m saying this for anyone who would’ve won the award, even if it wasn’t going to be Big Bang.  Or did you just assume Britney was going to win and couldn’t come so you didn’t even plan for anyone else?  Also, VIPs tweeted their fingers off to get Big Bang to the top of your tweet tracker, but when your backstage reporter brought up the tracker numbers he looked at it and just barely mentioned Big Bang’s name in a surprised flippant remark. I hate to say it but, it seems as if you just added the award to get more fans across the globe to be interested in your show–to gets more hits on your site, more tweets, and more views from a broader audience base.  So I’m a little disappointed in you. 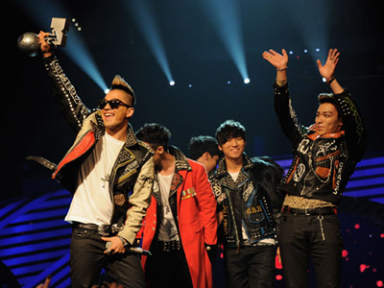 But Big Bang did win and I bet it shocked your knickers off.   And I just wish they could’ve shared their music with the world at your show because they’re a bit awesome and they would’ve given you a great performance.  And the whole language thing?  Come on–music is the universal language, the language don’t matter when the music is great.  Did you even know that G-dragon wrote all the songs on their last album, or that T.O.P. has the sexiest voice and Daesung the most velvety smooth, or that Taeyang and Seungri could rock your socks off with their moves?  Yeah, I didn’t think so.  But even though I’m a little disappointed in you I still thank you from the bottom of my Big Bang loving heart for the exposure and the win.  For Big Bang, the win brought immediate positive press from the Korean media and the tide of misfortune that had been going against them began to turn.  As a fan of K-pop and this growing craze called Hallyu I know it was a huge moment and it did open up the world a bit wider to all of our favorite K-pop stars.  Every single person that was watching and didn’t know who Big Bang were and was a bit interested probably googled them and got introduced to the world of K-pop.  It might be a bit cheesy at times, have too many members in a group, and questionable English lyrics–but our idols work their butts off, the music is catchy as hell, and we love it.  And the bigger K-pop gets, the better for international fans because it’ll bring them greater access to their idols and hopefully a concert or two.

So no matter what, thank you for bringing all five members of Big Bang together on stage again after months apart with smiles and the hope of bigger and better things to come. It was a wonderful thing to see.