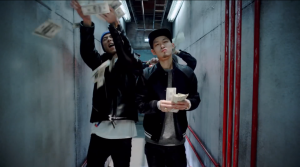 This summer in K-pop, there was a heck of a lot of hullabaloo surrounding the plethora of competing idol groups that were all making comebacks around the same time. New songs were dropping with tons of fanfare and fan wars as groups fought for their spots on the charts. However, although the focus was not often on the quieter scene of K-hip hop, it was just as active this summer, with some of the genre’s biggest stars and up-and-comers releasing music that was (arguably) better than the idol releases. Although some indie artists topped the charts, most notably Primary, Zion.T and his bestie Crush, not all K-hip hop releases had the same exposure or popularity. Ranging from the weird to the more mainstream-friendly, many great releases were lost in the shuffle. So without further ado, let’s take a look at some that don’t deserve to be forgotten.

Without the confines of the idol system, K-hip hop artists are able to be as as vulgar and as strange and as personal as they want to be. Just Music‘s Genius Nochang takes that advantage to the extreme on his newest album, My New Instagram: Mesurechiffon. Hard to listen to at times but always worth it, Instagram takes listeners on an odyssey through heartbreak and hip-hop. Featuring random appearances by Julia Child, Jay Z and Kendrick Lamar (Nochang does a spot-on impression of K-dot), Nochang wears his numerous influences on his sleeve. Stand out tracks include “Ching Chang Chong,” a whirling carousel of a song, and the angry “We Are the World,” but the real show stopper is the last track, “Line.”

The whole album is worth a listen, especially for fans of dense and layered music that doesn’t go in expected directions.

Giriboy, perhaps most-known from his 2014 stint on Mnet‘s Show Me The Money 3, was everywhere in the summer of 2015. He featured on tracks for Sistar, Kara’s Gu Ha-ra and Beast’s Hyun-seung. However, he was also busy working on his own music. Following the storyline of an ending relationship, Giriboy took a step closer to the mainstream with 4 Lonely Songs. The short EP is admittedly lot easier to listen to than his labelmate Nochang’s Instagram. The production is great and the songs flow well. Mellow, bittersweet and slightly jazzy, standout “We Got Married” features Giriboy at his rap-singing best.

Illionaire Records founder Dok2 is pretty well-known to anyone who even slightly follows the K-hip hop scene. The brash, hustling CEO dropped his new album, Multillionaire, late in June. Dok2 shares his musical journey on the slow-burner “Still On My Way,” featuring hot R&B singer Zion.T, who is always welcome on any track. The songs on Multillionaire vary from bragging tracks about money and success to shout-outs to failed relationships, but “Still On My Way” feels like the most personal, heartfelt track on the album. It’s a departure from what we’re used to from Dok2, and the song’s power lies in its understated honesty.

While certified celebrity Jay Park was off making beats pop with “Mommae” and trying his hand at mainstream success with “My Last,” his roster of AOMG artists wasn’t sitting idle. Rapper Ugly Duck released the bouncy digital single “Whatever” in June. Featuring brassy horns, smooth vocals and cool guitar licks, “Whatever” is an instant earworm.

While quirky soloist Lim Kim was getting lots of attention for her infectious single “Awoo,” another just-as-deserving female singer flew under the radar with a bumping hip-hop track (that predated HyunA‘s similar concept by over a month). Anda, an artist that’s been around the music scene since 2012, isn’t technically a K-hip hop act, but her cheeky and self-aware “Touch” is tons of fun and infinitely danceable. Just try not to move in your seat while you listen. I dare you.

This is just a sampling of the many K-hip hop songs released between the months of June and September 2015, but what were some of your favorite K-hip hop songs this summer?