G. Soul's Summery "Crazy For You"

G. Soul is an artist many people have been keeping their eyes on and with good reason. He has quite a backstory — he spent fifteen years as a trainee under JYP entertainment — and he debuted in January with the soulful and impressive “Coming Home”.  Now he’s back with “Crazy For You,” a ’90s influenced house track that’s reminiscent in style to Shinee’s “View” from earlier this summer but also completely his own. G. Soul’s smooth voice is his calling card, and he knows how to work it, even over what’s technically a dance beat.

The lyrics are nothing exceptional, and in keeping with the style of the track, are somewhat repetitious.

And so on. The real magic of the track is in the chorus. Again, the lyrics are nothing groundbreaking, but the way G. Soul sings it is what makes it special. His voice is definitely the star of the track, but the runner-up is the production. The song is light, bouncy and easy to dance to, but it also contains the right amount of melancholy in the vocals to make an impact. “Crazy For You” should’ve been released earlier in the summer because it’s the perfect track for a late, hot Friday night, but there’s still a few weeks of summer left to get a groove on with G. Soul. 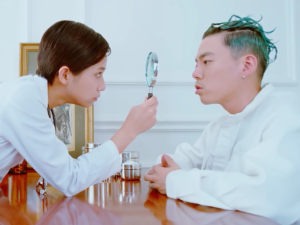 The pretty M/V takes the lyrics literally and the first shot features G. Soul in a straight jacket. Set in a mental institution, the singer plays a patient besotted with a beautiful, mysterious woman. When he takes the blood-red pills prescribed to him, he slips into a fantasy world filled with clown masks and warm sunlight and parched desert-scapes as he chases after his dream woman. The imagery is lovely, even if the setting of the mental hospital is cliche. Bright, blown-out whites and sparkly lens flare are showcased as is some subtle sexual symbolism.

Although the concept of the M/V is very on-the-nose, the thing I liked most about it was that a lot of the visuals were more metaphorical. In one scene, a peach tree grows out of G. Soul’s palm. The next shots feature his dream woman plucking one of the peaches and taking a bite. Later, she drops the half-eaten peach between her legs. It’s not to hard to deduce what is being alluded to, but it was done very simply.  Another visual that was done well was the scene in the desert. Our lovesick main character is running after his mysterious woman, but the sun is blinding and the earth beneath his feet is cracked and dry. He’s in love, but he can’t reach her and his emotional desert stretches on and on. It’s very poetic, and it has a lot of impact. However, not all of the symbolism in the M/V works. The clown masks, for example, are just kind of silly, but hey, they look cool. 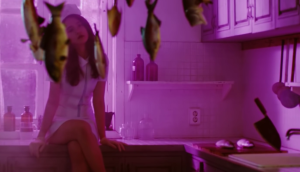 The main drawback to the M/V is that it’s nowhere near as fun as the song. It tries to be a mysterious, weird and quirky — especially with the appearance of the oxygen masks and the fish heads — but ultimately, there’s not enough weird to balance out the bland. This M/V isn’t anything we haven’t seen before, and it ends up being too subdued and forgettable. When it’s over, it fades away like the main character’s romantic fantasies. It doesn’t take away from the song, but it doesn’t add much to it either. G. Soul’s neon green hair ends up being the most memorable thing about it.

Luckily for us, “Crazy For You” is the real gem, with or without the accompanying M/V.