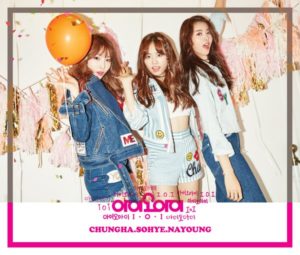 For those who missed it, I.O.I was created through Mnet‘s latest reality survival show, Produce 101. The basic concept was that 101 girls from different companies would compete to become one of eleven members for a project group that would promote for one year before disbanding. After a handful of months and eleven episodes, we got the final line up of girls: Somi from JYP, Sejeong and Mina from Jellyfish, Yoojung and Doyeon from Fantagio, Chungha from M&H, Sohye from Redline, Pinky and Nayoung from Pledis, Chaeyeon from MBK, and Yeonjung from Starship Entertainment.

With so many girls from different companies, it’s understandable that an outside company was chosen to handle the promotions of I.O.I. However, instead of choosing a company under CJ E&M, which owns Mnet, they looked elsewhere and landed on YMC Entertainment, home of singers such as Ailee, Wheesung, Mighty Mouth and Baechigi. The reason for this? Because YMC had no trainees in the group, or on the show itself, the company would then be impartial when it comes to the treatment of the girls and dividing lines and the like. The first output of I.O.I under YMC Entertainment is Chrysalis, their debut album which refers to the transitional period of a pupa or caterpillar in which it will transform into a butterfly or moth.

They may have been hoping for a transition into a butterfly, but was that accomplished?

The mini-album starts with the intro track, “I.O.I.” Intro tracks are meant to set us up for what we’re about to hear, to get us immersed in the album or to hype us up. And the intro track does all that, and manages to make me excited. Could we be getting something that could possibly be exciting? With Nayoung asking us to focus on them, I’m more than willing to buckle up and see if this will be worth it.

It is then followed by “Dream Girls,” the promotional track of the album, and understandably so. It fulfills all the girl group debut track tropes: it seeks to establish themselves with something light in sound, with lyrics that seek to empower and set forth their journey into the hectic chaotic idol world.

Run towards your dream, dream girl

Trust yourself, don’t give up

The track starts off in a similar vein with “Yum Yum” before evolving into something like “Fingertips.” In fact, it sounds like “Fingertips,” “Yum Yum” and “In The Same Place” were crossbred to make this song. I know, that sounds weird, but hear me out. It begins in a similar pace to “Fingertips,” gets a kick in the pre-chorus reminiscent to a toned down “Yum Yum,” and then the chorus tries to have a mid-soaring chorus like “In The Same Place.” 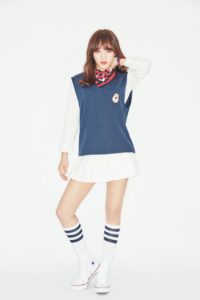 While it seeks to do something new with the current trend of “Into the New World”-like tracks, there’s just something that does not go well. It seems more like a debut track of the first girl group of a small company rather than a girl group from a massive reality survival show such as Produce 101. Considering it’s YMC Entertainment taking the helm of this project, it shouldn’t come as a surprise. While yes, the company has Ailee and Wheesung in their roster, they have not had a girl group. Which is why it continues to surprise me that they, out of all the other agencies, were chosen to manage not just the eleven members but also their one year project.

I’m calling it now – they’re using this to test drive their idol approach once they come out with their own girl group.

It also happens to waste the vocal talent of Yeonjung and Sejeong. Yeunjung got that high note she will surely be having in every release, and both got a good part of the lines, but it was all lacking since they have done so much before. This doesn’t stop with the promotional track, but is continued into the rest of the album. In fact, the production value of the album as a whole is a bit iffy. We got reports that the eleven members moved into a fancy dorm, so YMC Entertainment seems to have spent their money on that instead of on having a album with good quality production value.

“Tok Tok Tok” and “Doo Wap” continue their trend of following the current trend of tracks that are modern takes of the girl groups of the olden times. I can somehow see these tracks as being in albums of A-Pink, GFriend, and pre-“Gee” era SNSD. Even Nine Muses has a track similar to these two songs in their first album.

Despite me saying this, I will admit that these two tracks are tracks I could potentially myself listening to more. If it’s because it’s an I.O.I track, or because it sounds like every other female track, remains to be seen.

“Crush” is a break from most of the album. As an individual track, it is quite good. It may not appeal to everyone, but there is just enough to warrant it being a title track for some other groups. There is excitement, there is sass, and there is energy. It is unrelentingly youthful but with just a bit of edge that makes listening to the song an experience. 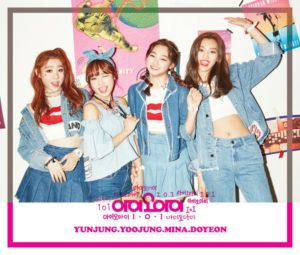 That being said, it does not belong on this album and breaks all flow or attempt at a theme that was set up in the previous tracks. “Crush” is joyfully modern while the rest of the album, with the exception of “Pick Me,” wants to be part of the trend of modern throwbacks to the 90’s and early 2000’s of K-pop. It is distractingly modern in an otherwise acceptable, if not basic, throwback-styled debut.

“When the Cherry Blossoms Fade” is a track that, like “Crush,” was performed during the Produce 101 finale. A track composed by B1A4‘s Jiyoung, it follows the trend of tracks that are throwbacks to the past. It is also atypical of  mid-tempo songs and follows the standard formula that has become famous with the rise of GFriend. This necessarily isn’t a minus, for why try to do something different when it’s clear that this is supposed to sound like atypical love song.

And if you wonder when I found myself in need of something heavier than wine, this would be it. Closing out the mini-album is “Pick Me.” Now, I admittedly did end up liking the first version. It was a good, senseless pop song that I could play while working out or on commute. It didn’t take itself seriously, and I could easily loose myself in the nonsensical song that it was. But this new version? Frankly, it makes me want to go suffer through “Rock the World” ten times over than listen to it ever again.

If you thought getting 99 girls to sing a song way out of tune for them was bad, wait until you get a load of the new version. What is new in this version? Well, instead of 99 girls, there are 11 girls who sing this song that is set too high for human listening. And yet, instead of becoming better, it becomes worse. With the 99 girls singing in chorus, the flaws were easily hidden. But with this version, the flaws are made evident, and all life the original version had has been sucked out into this hollow replica of the song.

I may not be an expert, but I can bet that that is not supposed to happen. 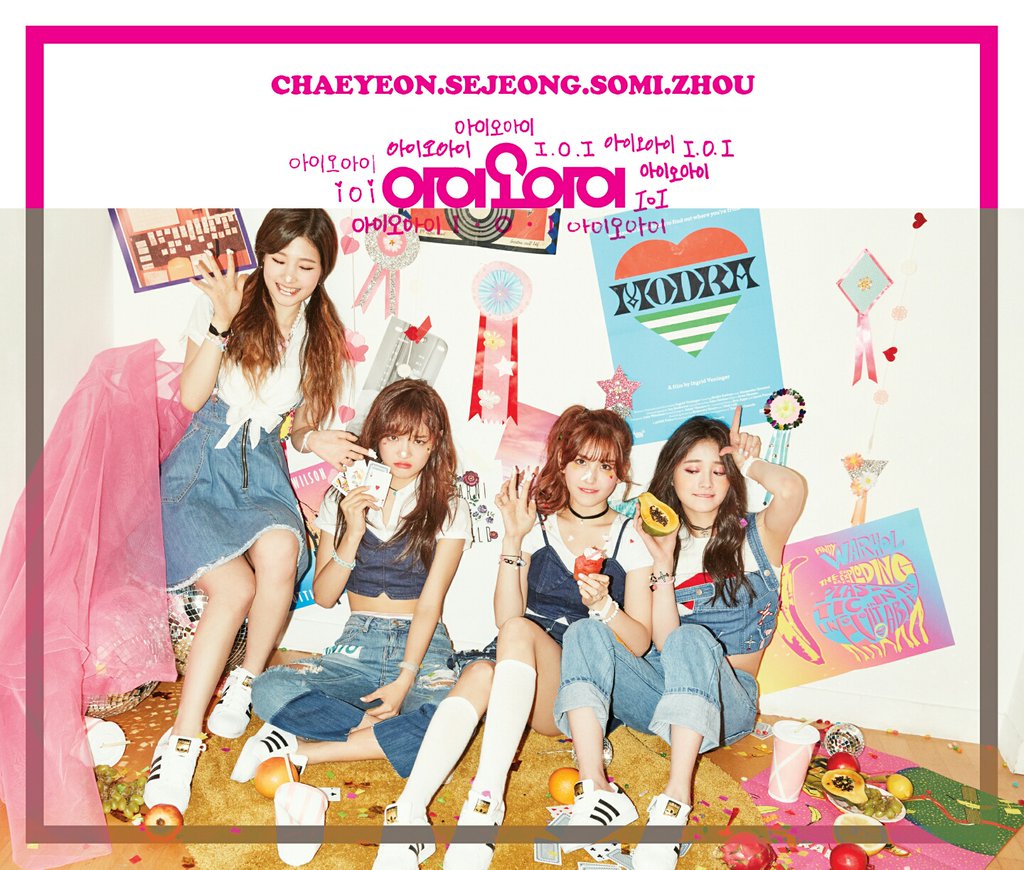 All throughout Produce 101, we were told that they would be working with top producers. On paper, it seems about right. However, it becomes increasingly obvious that they were given throwaway songs from said producers. Most of the songs follow the same sound and formula that currently rule the airwaves, with little to no variation to make the trend their own. It seems like the producers behind the album are more than willing to go with the flow, knowing that the massive fanbase that was formed thanks to Produce 101 will accept anything and everything.

That being said, there is hope that the next release will be something more noteworthy. You don’t have to make the group do anything revolutionary, but if you’re going to follow a trend, then you had better make sure it’s done into perfection with just a smidgeon of something different to make it their own. As it is, most of the songs from I.O.I’s debut mini-album can also be heard in several other artists who are managed by agencies that are more than willing to let their main vocalists shine and to take small but measurable risks in the formula.

Album Ranking: 2.5/5 – as average and basic as an album could be, with some minuscule highlights in otherwise run-of-the-mill tracks that are then horrifically erased by that final track that should have never been included in the first place. 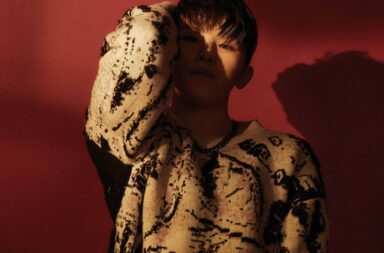 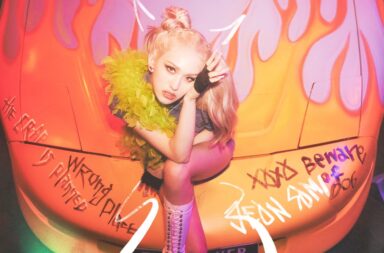