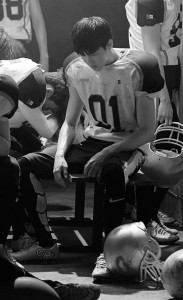 SM announced this week the date for Exo‘s repackage of second album Exodus. With new single “Love Me Right,” to be released on June 3rd, Exo will be showering us with sports-themed images. The only thing is, we don’t know which sport they’re playing.

The first teaser image released seemed to show a rather scrawny-looking American football team… wearing baseball caps. Apparently, the pants were also all wrong, and they were probably wearing soccer (AKA global football) cleats as well.

Speaking of soccer, the next set of teasers showed the American football team walking onto the field… which had a soccer goal net set up. Unless they’re playing Gaelic football (which is awesome, by the way), then nothing in these teasers make sense, other than the emotions of pain, suffering and loss on the members’ faces. Look at the consternation on Suho‘s visage, dammit, and tell me you don’t feel anything!

Essentially, it seems like this comeback will boil down to a display of unity (“We are one!”) through small town community by way of sport (or whatever the hell homecoming is). So, does it really matter what sport it is? For all we know, SM may just be wanting to cover all the sports and appeal to as many fans as possible. And if that is the case, then I have a few suggestions that the company may like. 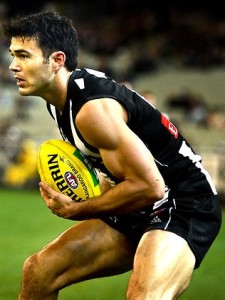 That’s right, I’m talking about Australian football. Big Bang is already making its way Down Under, time for SM to do the same! For those unfamiliar with the sport (i.e.: almost everyone reading this), Australian Rules football uses a ball like an American pigskin on a diet that is kicked between goalpoasts to score points. It’s a fluid and dynamic sport that is always entertaining to watch.

But for me, my favourite thing has always been the clothing; BTS won’t know what to do when they see EXO in those small shorts, not to mention the sleeveless guernseys; you can see more guns on-field than at a NRA meeting. Considering that Exo members do have nicely defined arms themselves, it only makes sense to show them off in an outfit what will also keep their protruding ribs out of view.

Again, Exo’s guns could be the focus, but I want to take this in a different direction, and make Exo ball boys. Make it a ladies match, get Kai to exchange meaningful glances with one of the players as he runs across the court or hands her a towel, and you have yourselves a flirty little game, set and match. 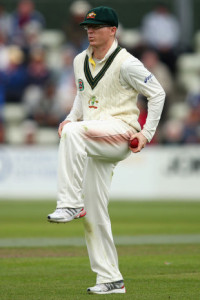 Ah, the gentleman’s game. Get the boys into some whites and see how proper they look! Teach Chanyeol a bowling motion and admire the length of his limbs, enhanced by his height. Make Sehun umpire and watch him signal a sixer with the straightest face you have ever seen. Have Suho be a good captain and shine the ball by rubbing it on his pants! Hard!

Exo in speedos. And if you’re feeling a bit queasy about that, google Australia’s Prime Minister in speedos. After that, everything will look pleasant by comparison.

South Korea is a big player in the e-Sports arena, and you know the boys dabble in Starcraft and Dota. SM could even take things further by putting pixelated Exo members into a similar setting to these games, like a more hardcore version of Vixx‘s “Rock Ur Body.” And considering the role e-Sports tournaments played in helping “Gangnam Style” crossing into the West, appealing to this sector wouldn’t hurt. 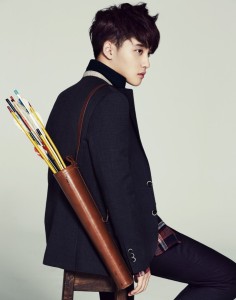 Anyone who’s watched the Idol Athletics Championships knows how intense the archery competition can be. The focus, the concentration, the control… With the Exo members holding the ebow, it would make for some rather swoonworthy visuals. And even if SM decides to make it into some kind of cheesy “Cupid’s arrow” kind of deal, we can always count on D.O. to maintain the intensity with those big eyes of his, glaring into our very souls.

There can never be too much Harry Potter in K-pop, especially since J.K. Rowling hasn’t yet pursued any copyright infringements. Besides, Kai can already apparate, which makes him practically a wizard. And the others have powers, too, like in Twilig— wait, never mind.

Here is another chance for Exo to insert itself into the square game: Suho would be king; D.O. queen; Chanyeol woud be the bishop(s); Baekhyun the rook(s)/castle(s); Kai the knights; and Exo-M the pawns. What, I sound like a pressed Exo-M stan? Of course not, I love OT… Um, we are one! 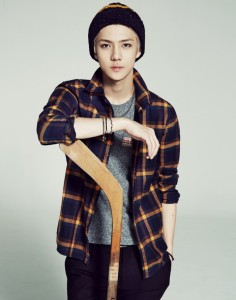 Football can be a violent sport, but nothing compares to the brutality of Ice Hockey. However, I don’t want to give in to bloodlust. Instead, SM should Disney the hell out of this thing. Break out the Mighty Duck formation against a team of hard-eyed, white-skinned blonds, and ramp up that nationalistic fervour!

It’s an expensive sport, but SM can save money by borrowing $uho’s gear and golf club membership pass.

Those are my suggestions, readers; what sports would you like to see Exo try?