The Sunday Social, 5/3: Big Bang Down Under!

Hello everyone, and a Happy Sunday to all!

I’ve been a bit busy with life and stuff these last few weeks, but I’m back in time to lose my mind over the big announcement made on Friday.

Just as Australian VIPs and other K-pop fans were preparing for the much-awaited return of Big Bang, news started coming out that the YG group may be, might be, bringing their Made tour down under.

No one was sure what exactly was going on, but luckily the Korea Cultural Office Australia gave us all the details we needed (for now): that Big Bang is coming to Australia, and holding a single Made concert on the 25th of September. As expected, the selected venue is in Sydney: the 21,000-seater Allphones Arena will be the place of convergence for K-pop fans Australia-wide. 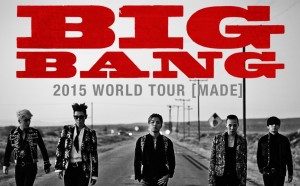 For those who remember, Allphones Arena was also the venue for Super Junior‘s planned solo concert in 2012, before it was called off by JK Entertainment. This time around, the concert will be hosted by Award Entertainment Global. Though not as well known as JK Entertainment, this company with Chinese ties successfully hosted Jay Chou‘s Australian tour last year; it seems they have the experience to pull off a big concert like this.

So, who’s excited?! And how are you all getting to Sydney? I’m planning on taking the car when my sister isn’t looking. It’s going to be so exciting seeing them in person on Aussie soil, instead of just on YouTube and on those giant screens at Melbourn Central station.