Miss A Makes a Sweet Return with "Only You"

It’s been almost a year and a half since Miss A’s last comeback, and I’ve gotta say that it’s always fun anticipating a Miss A comeback. Is it going to be bad-ass? Sensual? Fun? A unique point about Miss A is that they don’t stick to any fixed concept such as the Big Sexy-Cute Divide, fortunately allowing them room to explore and be known for their talents and performances beyond a certain concept. Although there were worries that Suzy‘s relationship with Lee Min-ho would detract from the group’s comeback, Miss A still managed to slay on the charts with an all-kill once the song dropped.

This time around, fans are treated to this sugary, bubbly single “Only You,” and the teasers already hinted at a flirty and girly concept. Once again choosing to not use JYP as their producer, it’s a drastic change from their previous single “Hush” and more along the fun lines of “I Don’t Need A Man.” “Only You” opens up with blaring horns and accompanying snares, setting the atmosphere for the girls to chime in with the catchphrase of the song.

The repetitive layering of “oohs” are reasonably well-placed, providing the added cherry on top to the texture of the song. The track also features a catchy hip-hop beat, which builds impressively in the pre-chorus, leading to the bright and cheery melody of the chorus. After which, the girls proudly boast that there’s “no other guy but only you.” It veers a little safe and forgettable for a Miss A single, coasting along till the end, leaving listeners wanting a little more oomph and theatrics. The lyrics are also standard K-pop fare, expressing the girls’ whole-hearted love for the lucky boy, who unfortunately doubts her commitment to him. Still, “Only You” might seem like a generic girl group pop single, but maybe because it’s Miss A, it definitely grows on you after a few listens. 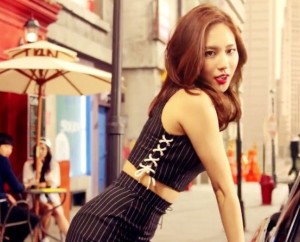 The MV has minimal plot action, but it’s such a visual treat that it’s riveting to watch. It’s a box MV, but the set is so saturated with colours and props that it draws the viewer in wonderfully. The perspective of the MV is seen through the eyes of a peeping tom, who is somehow fortunate enough to have a perfect view of the Miss A bedroom. He spies on them as they go about their daily routines, but the girls are no clueless females. They know about their stalker and take it upon themselves to tease him by literally dancing and making eye contact with said stalker. Hopefully, this doesn’t encourage any fans to attempt to replicate such a situation.

It’s impossible to talk about Miss A without mentioning their flawless outfits. They are rarely caught in any fashion faux pas, and this time is no exception. Vibrant colours aside, their individual attire accurately suits each of their distinctive personalities, and they look a-ma-zing (as usual). Maknae Suzy is teasing in a halter top, kkap Min flaunts her cleavage with bomber jackets and a baseball cap, fashionista Fei pulls off classy mini dresses, and badass Jia struts her confidence in simple casual wear. The pink accents not only look girly and adorable on the quartet but also serve to present these girls as a cohesive group. 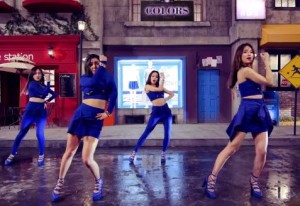 In short, “Only You” is nothing outstanding but honeyed enough to satiate fans’ appetites. The prominent use of horns is something that’s becoming a more common feature in pop songs, and it does give “Only You” that little added bit of sass.

The track is less memorable than most expected, but Miss A did the best with what they were given. All four girls have definitely improved in their live vocals and confidence on stage, and once again, Miss A shows that they have got what it takes to bring their A-game. Not a sumptuous full meal, but just right for a sweet afternoon snack.