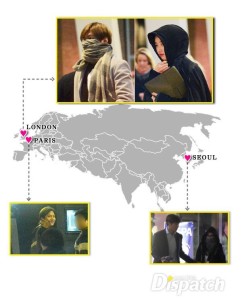 The star couple of 2015 has been born! Hallyu star Lee Min-ho and the nation’s first love Suzy have been confirmed be dating for about a month. As expected, Dispatch released a report earlier today, with photo evidence of the two traversing the globe for dates.

With their busy schedule, it’s understandable that the couple would have to squeeze in whatever available time they have in between schedules to see each other, even if on foreign soil. Dispatch successfully followed the couple to Europe, and caught the two meeting up in London on the 15th for a 3-day date, after they each completed their respective work schedules. Even though the couple were initially heading to different destinations, that was insufficient to throw Dispatch off the scent. Indeed, Dispatch has upped their game this time round.

After such irrefutable evidence, both agencies immediately held “emergency meetings”, probably to decide what level of the truth-o-meter they should rev up. Thankfully, both JYP Entertainment and Starhaus Entertainment decided to come clean with the truth and confirm the status of the relationship.

It’s sweet to see a new couple being so in love, as it’s also been reported that Lee would pick Suzy up daily to go on dates, whenever he was in Korea. A K-drama come to life, except the nation first love is ironically everyone but Lee’s first love, after his previous high-profile relationship with City Hunter co-star Park Min-young.

It’s tough to rival this couple in terms of star power or fan club size, and hopefully this doesn’t derail any hype from miss A’s long-awaited comeback. In any case, we wish this couple all the best!