Infinite Announces Group Comeback in May 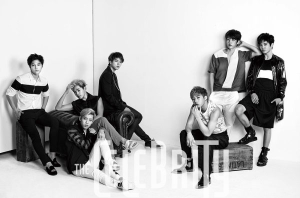 Infinite has revealed a group comeback scheduled for this May at their large-scale fan meeting Infinite Rally 2 yesterday! During the event, which is held over the course of two days, and garnered about 16,000 fans last night, a one-minute prologue teaser was shown announcing a “7-in-1” return.

This isn’t the group’s first time revealing future projects to fans during fan meets and concerts either, with last year’s One Great Step Returns concert seeing the reveal of sub-unit Infinite F, who made a début close to the end of the year.

The teaser in question doesn’t reveal too much about the comeback, except for the month and perhaps some hints about the concept. The video appears to be more of a series of image teasers, zooming in and out of the motionless members posing on alternating triangular and circular metal shapes.

The outfits seem to bear resemblance to those they wore in their “Back” comeback last year, and the logo shown at the end of the video is also the one used on their Be Back repackaged album. Sunggyu also stated at the fan meet that, although the group is currently on their Japan Arena Tour, fans can look forward to the group’s return to Korea in May with brand new music.

Are you looking forward to Infinite’s comeback, readers?