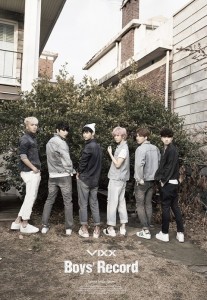 We’ve seen VIXX take on many roles in the past, ranging from vampires to living voodoo dolls, and most recently, androids. These concepts have gained them great attention, and many fans have been drawn in by the members’ realistic portrayals of fantasy characters. At this point, VIXX is often equated with the dark, dreamy images that have launched them into popularity. Hidden behind all the whimsical worlds they’ve created, though, is a more approachable, realistic group.

The softer, brighter side of VIXX has been showcased in releases like “Rock Ur Body,” which features a video game theme, and “G.R.8.U.”, which takes viewers backward through time. With songs and videos like these, the group proves they don’t need darkness to produce an enjoyable and distinctive experience.

“Love Equation,” their most recent comeback, reinforces this fact especially forcefully. Even though they ditch the supernatural elements that usually set them apart, the members don’t ditch their unique character in the MV. Instead, they put their talents to work in a cheerful way, creating a video that avoids falling into the category of “generic cute boy band.” While casual observers might not be instantly enthralled by “Love Equation,” it’s overall an uplifting MV that offers every viewer an opportunity to smile.

The video starts in a somewhat underwhelming way: we see Hongbin reluctant to wake up, and he seems a bit blue. His melancholy is mirrored by his fellow members in their own individual parts, a thread that unites each of the otherwise unrelated scenes. The boys are put in rather mundane situations — Hongbin washes his face, Ken plays video games, and Ravi mops — but they all look quite natural, as if a professional camera crew decided to spontaneously film people during random times during the day. In these scenes, the boys seem unaware of the camera watching them.

Of course, there’s also the perfection and shine that reminds us these are made-up boys acting for a music video. What makes it bearable is that the acting is not overt; in the same way we know that dramas are not real, you can tell that this isn’t real, but it’s almost as real as a music video can get.

Even if you aren’t already a fan of VIXX, there are a few scenes that are adorable enough to bring anyone at least a little spark of happiness — provided by Ken, Ravi, and Hyuk. These three display an innocent boyishness that is cute without causing a sugar overdose. Scenes of Ken getting intensely into his video game and Hyuk shoving ice cream into Ravi’s face are much cuter than any over-the-top aegyo.

In the end, all six of the members come together for a fun hangout session. Although each of the boys had been a little gloomy on their own, friendship prevails when they come together. Even N, who got rejected at a bus stop, is able to cheer up with his friends around. It’s heartwarming to see them play around, and helps keep the MV from ending as a cliche story of boys with sad love-lives. Rather than leaving viewers inwardly laughing at how unbelievably sad the members look, it leaves us with a warm reminder that the perils of love don’t have to dominate our minds. 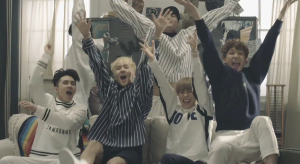 These acting scenes make up only a small portion of the video, though. In all other cases, the members are paying full attention to the camera. They pander to the hearts of fans with all the charisma they’ve got, being as cute as their consciences will allow them. Leo, the notoriously stoic member, deserves a special mention here for his whole-hearted participation in the cheerful concept; despite his constant battle against the many aegyo requests he receives, he managed to be adorable in a way that doesn’t even look forced.

The dance here is relatively simple. Nothing too complicated, but done with an earnestness that matches the cheerful tone of the rest of the video. Since “Love Equation” is a cover of R.ef‘s 1995 song “Farewell Formula,” it’s not surprising that the dance borrows some elements of R.ef’s choreography. A little more interesting for fans will be the small hints of the dance from VIXX’s last single, “Error.” It’s nice to see a connection between this bright side and their darker side, as if VIXX is telling fans that we shouldn’t fear that either side will ever be lost. 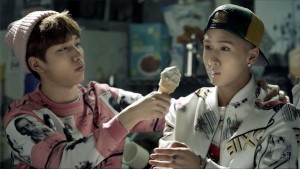 Musically, “Love Equation” retains the melody of “Farewell Formula.” VIXX’s track, however, is a brighter electronic arrangement that is dominated by synthesizer. Ravi’s deep voice helps keep the brightness of the track from launching the song into the clouds, and the bouncy rhythm of his rap goes well with the song as a whole. The electronic sound evokes a bit of the technological feeling of “Error,” but its greatest strength is the connection it forms between old and new.

The song sounds slightly nostalgic, a feeling greatly enhanced by the boyishness of everything from the members’ clothes to their acting in the MV. It also sounds simultaneously modern, creating a nice musical representation of VIXX’s attempt to bridge 1995 and 2015 with this cover. If you listen to the original song below, the differences between the two songs will become quite clear; whether the differences between the original and the cover are a negative point is really up to the individual listen. Personally, I like the new direction VIXX takes with their version of the song.

“Love Equation” is not a song everyone will like. That’s not really a problem with the song itself, or with VIXX’s delivery — It’s just a simple consequence of differing tastes. Even for VIXX fans, this could be polarizing. If you aren’t into cute boys and sweet songs, this release won’t do much for you. For those who like the adorable side of K-pop, this is an adorable concept done quite well. Although this is not the dark, dramatic concept many have come to expect from VIXX, it’s a nice reminder that these boys have things to offer besides fantasy.