Shinhwa's "WE" is Another Legendary Return 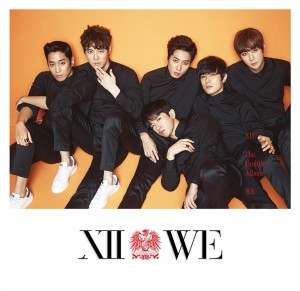 The legends of K-pop are back. While some of us melt into a puddle of uncontrollable feels, or are hoping to be resuscitated because we are now dead, we must also take the time to look at Shinhwa’s new album. WE is the group’s 12th album, and they are just as good as ever.

The tracks on WE mainly fall into three categories: lust, love, and sentimentality.

“Alright” falls somewhere in between lust and love. As the first song, it’s an appropriate summation of what is to follow on the album. With a strong brass line and backing snaps, “Alright” is a smooth exclamation of want and desire. Granted, there are some cheesy lines (such as Andy’s “We can share love like it was a last slice”), but Shinhwa pulls it off.  Despite the smoothness of the track, there’s also a snazzy beat that sets it up to be dance-able. Perhaps this is due to ChaCha Malone (famous for being part of AOMG and Jay Park’s main homie) being one of the composers – “Alright” does have that “feeling” associated with Jay Park.

“Alright” reminds the listener of what Shinhwa’s career has been littered with: spiffy dance tracks that exude charisma. If you need extra incentive to listen to this song, check out the live performance, where Shinhwa shows how they own the chair dances.

If the lyrics in the previous track were a bit cheesy, “Cat” takes the cake. A cat metaphor and a swamp: quite odd, to say the least – not to mention a little dirty (“I fall deeper into her swamp”). It’s all rather comical, yet, forgivable due to the sharpness of the music. The electronic instrumentation is exact and punctuated. Like the lyrics, the singing style of the group is also a bit comical — You can even say it’s cute. The most impressive part is the great harmonies during the chorus.

Title track, “Sniper” may throw you for a loop, initially. It’s a bit weird, though you may not notice while fawning over the MV. Shinhwa teamed up with composer Andrew Jackson for the third album in a row (he helped with the “This Love” and “Venus” title tracks). Like in those previous releases, electronic sounds take the forefront. You are initially drawn in with the whistling, and stay for the pop. The best thing about “Sniper” is that the group effectively rotates the rappers and vocals without having huge chunks of either one. It may sound odd, but it still flows well. Also, pay attention to the rap lyrics, as MFBTY‘s Bizzy joined in penning them (along with Eric and David Kim).

The last song is lustful, as is obvious from the title “Give it 2 Me.” There are no metaphors or similes; Shinhwa is straightforward in their desire for a woman. They have been captivated by the seductive game the woman is playing, patiently waiting for her to come to them. Meanwhile, they are hungry for her to give it to them.

“Give it 2 Me” is a funky song with muted instrumentation. It features a simple rhythmic guitar and bass, with a few electronic sounds and drums. The song is rather rap-line heavy, which fits well with the overall aesthetic.

Next, we get the romantic yet angsty Shinhwa.

“White Shirts” is the initial love song – though perhaps it could also be considered sentimental.

The group is looking at their white shirts that their former lover loved to wear. Thus, they are sad and longing for the past lover to return. Like the lyrics, the music is also subdued and emotional. A cross between a pop and rock ballad, “White Shirts,” is rather simple with guitars, strings, piano, and drums. 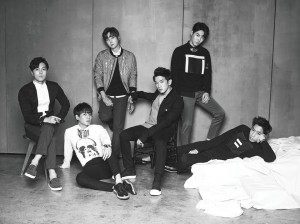 While “White Shirts” follows the standard love-ballad sound, “Ice Moon” goes in the other direction for a pop-dance love song. Musically, “Ice Moon” harkens back to 90s Western boy-band pop. The falsetto chorus vocals and “bad, bad for you” refrain add extra attitude.

The song is bit mysterious in its meaning, but ShinCom‘s own description would probably work best: “The secretive and unique lyrics describes of a yearning love that appears in the night when the cold moon rises and disappears again in the morning.” With illusions to the cold and ice, you get the sense of a hardened heart waiting to be unfrozen.

The previous two songs were more angtsy than romantic, but that is made up for by “I’m in Love,” which is another track with a catchy hook.

That’s a pretty simple lyric line to remember and sing along with. The song itself is about realizing they’ve fallen in love and are expressing all the things they feel about the girl. If anybody remembers “Perfect Man,” you can’t help but be reminded of a few lyrics of that previous release, not to mention the style. “I’m In Love” is a mix of pop and R&B, which creates this smooth and sexy mood. 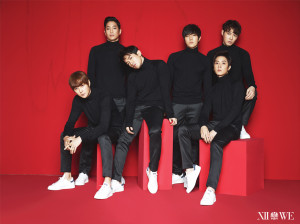 Finally, we get to the sentimental side of Shinhwa.

First up is “Don’t Cry,” and like practically every other song by that title, it’s a ballad. A rather strong, electronic ballad, but a ballad nonetheless. Listeners are in for a bit of surprise 2.5 minutes in: a dubstep rap break. Despite this being a bit out-of-place, it doesn’t stop the song’s movement or change the feeling. In this song, the guys are the friends who are in love with the girl who has a boyfriend. They are her shoulder to lean on and her comfort, because they know her pain and love her. Sadly, it seems like a rather one-sided love.

Pre-released track “Memory” is about as sentimental as it comes, from the MV to the actual lyrics. “Memory” has that hopeful instrumental that is vital in the types of songs that look back on careers and life. Although never directly stated in the lyrics, the song is a bit of a salute to their fans and lives. The memories they’ve created over time are forever embedded in their hearts, and they cherish them.  Shinhwa has come a long way with their Changjos, and their vocals show how emotionally connected they are to the fans.

What better way to end an album than a song called “Never Give Up?” As stated above, Shinhwa has had a long journey. “Never Give Up” is their proclamation that they will keep aiming for the sky together. Although written as though to a lover, it’s really for each other.  Musically, the song is synthesizer heavy, and includes another odd rap break. There’s also a rather annoying yelling/fuzzy sound playing in the background. This is perhaps the weakest song musically, but the lyrics make up for that.

The odd rap breaks and cheesy lyrics can be overlooked in favor of the overall quality of the album. With great dance beats, catchy whistles and snaps, and smooth vocals, WE is all that is good about Shinhwa. The group knows how to get you moving and how to touch your heart — and they do it with flair. They – particularly Minwoo and Eric – also were active in the lyric writing for some of these songs, which makes it even more special. WE is a great comeback for the great K-pop legends.