Is Infinite Your Savior with "Back"? 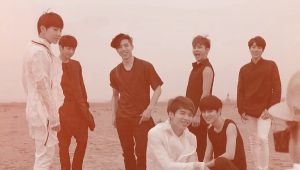 The boys of Infinite are back with “Back.” Sorry, that was probably a bad pun, but, needless to say, the group has returned with their latest track produced by Rphabet. It comes in conjunction with their repackaged album Be Back which includes two new songs.

The song itself is integral to how I received the MV. It starts with a piano driven orchestral introductory verse with Sunggyu, Hoya, and Woohyun at the helm. I find it extremely nice to hear Infinite’s rap line sing, and in this song everyone has a chance to shine with their vocals. The track continues in sweeping form, building up to the chorus with more drawn out vocal sections.

The video follows in succession with its story. We see the boys of Infinite outside of a building, donning all black attire. This also includes an umbrella and a skateboard, the importance of both becoming more apparent later. Fighting ensues as soon as they enter, but at the onset, it is mostly just melodramatic action with many shots of tense, angst-ridden stares, sometimes even directly at the camera. The members nicely execute the fighting choreography – with kicks, punches, jumping off cars, and smashed windows all adding to the drama of the battle. It was reported that there was a lot of preparation for the video as the members spent a few weeks at a school learning how to perform these different action movements. However, I did find it a bit cumbersome to watch these played out fighting tropes because there doesn’t seem to be much pretense to the fight. 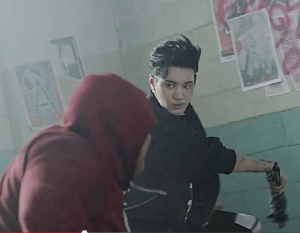 What gives these fight sequences a unique flavor is the use of props by a couple of the members. The umbrella that Sungjong uses during his fight is certainly different. Even though it seems out of place, the tone of the video does not waver as he seriously uses this umbrella as his item of choice in the fight. Also, the skateboard Dongwoo uses is probably the best prop in the whole video. Even though these items add fun tidbits to the action, the overly serious dramatized nature of the MV made me feel conflicted.

As the beat kicks in during the synth chorus breakdown, the members continue asking their love: “Can you save me?” The lyrics seem to hint that they need their significant other in their lives in order to be defined. One verse in particular hints at their desperation and need for this person in order to be saved:

“Don’t place me in time,

Don’t try to reminisce me.

Don’t erase a single bit of me.”

Perhaps that’s why they are fighting against seemingly insurmountable odds in the MV. They are the literal saviors hoping not to live in those past memories but rather to restore order to their world.

The best parts of the video are the dance portions. This is possibly my favorite choreography that they’ve done since “The Chaser.” Their dance has a mixture of intricate movements, and the members execute the set with high energy. The formations and blocking are done well, and each pivot of the leg and hand motion was in tune with the complex beat. Their thumb dance (for a lack of a better description) makes the chorus especially memorable. 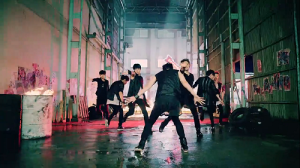 Style-wise, the MV’s setting and plot reminded me of The Warriors. The whole aesthetic of graffiti walls, trashcan fires and chained fences helps to give the MV a similar look. The members are also dressed identically — wearing black jackets embroidered with their winged Infinite insignia. The clothing helps to present the members in a grittier uniformed fashion.

My main gripe with the MV is the inconsistent tone. I do not think that it was the director’s intention to elicit laughter, but I found myself struggling to believe it because of the varied action and comedic elements. One action sequence in particular that had me laughing is a shot near the beginning when Sungyeol grabs one of the red sweatered enemies by the hair. I just can’t fathom that such a thing could happen in a serious fight. Also, the sequence when one of the enemies trips on Dongwoo’s skateboard before getting hit by said skateboard had me in hysterics. These moments are completely jarring when compared to the desperate and pleading overtone of the song. Also, the stock sound effects when people crash into wooden planks or when glass shatters is off-putting. They seem unnecessary and really stand out for the wrong reasons, especially with a song that is already as dramatic as this one is.

I also cannot help but draw some comparisons to “Before the Dawn,” Infinite’s other action-heavy MV that features fighting elements. Whereas that MV presents an internalized struggle that is expressed externally through L and Woohyun’s fight against each other, the shadow figure and time, “Back” focuses mostly on the aesthetic of the fight with little contextual development. The exposition of the plot is traded in exchange for dramatic action sequences. There is a scene with Sunggyu, L, and the girl that is intended to build up some back story, but this scene comes too late in the video and fails to connect.

With that said, I enjoyed the more comedic moments in the action sequences. Even though I was left struggling to find a steady tone to the video, I enjoyed the personalities of the members. It looked like it was probably a lot of fun to film this MV. Dongwoo and his skateboard are a riot. The scene where he rides down a hallway after taking out a few foes is epic. The song is a great addition to their strong discography as the orchestral and synth elements help to give it a distinctive Infinite feel. Overall, I enjoyed this MV, but the unevenness was just too hard to overlook sometimes.