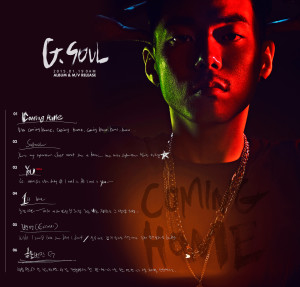 After being a JYP Entertainment trainee for over 13 years, G.Soul is finally making his debut.

JYPE first teased us with an image and short video with G.Soul “coming home” — which is the title of his debut mini album. Park Jin-young himself also wrote a Twitter letter detailing the struggles of G.Soul — shyness, poverty, training, not being able to debut in the United States, and staying behind to become a better artist.

Now, the teaser for his lead single, “You” has been released. The teaser looks to be a relaxed, behind-the-scenes look at the MV shooting. We can spot various props, the circular camera track, and lights. G.Soul enters the stage in relaxed clothing and just sits in a chair.

It’s unclear if they MV will be shot in black-and-white or in color, as it switches within the teaser. Hopefully, the minimalist nature of the teaser continues onto the actual MV, since it would fit well with what little bit of “You” we hear.

So far, G.Soul appears to be living up to the “soul” part of his stage name, if the ending note is any indication.

The mini album and MV are set to drop on January 19.