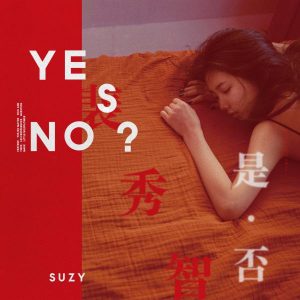 From being a member of popular girl group miss A, to starring in the recent drama Uncontrollably Fond, to duetting with EXO’s Baekhyun in the wildly successful “Dream”, Suzy can now add releasing an EP as a solo artist to her long list of achievements. Titled Yes? No?, this mini-album features six original tracks, two of which Suzy herself participated in as lyricist and co-composer.

The first track, “Pretend”, achieved an all-kill when it was dropped as a pre-release, and for good reason. This soft mid-tempo ballad features gentle jazz elements in the instrumental with hints of a R&B style. What I love most about this track is the stripped-down and laid-back mood — the instrumentals are deliberately kept to a minimum with the vocals taking on an almost echoing and reverberating effect. This really adds to the melancholy and meaning of the lyrics, which are about pretending to be happy:

I’m afraid of the eyes that are on me

I’m afraid of the words that talk about me

Pretending to be happy again,

Pretending to be happier

There are many songs that make me pause and think, and this is definitely one of them. The content and the meaning of the lyrics is so very relatable, and for me at least, listening to “Pretend” made me reflect on my own life. 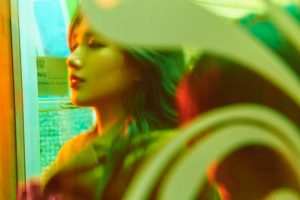 “Yes No Maybe”, written by JYP himself, is the title track. The genre and style of this song falls somewhere between a mid tempo ballad and a dance track and features electronic notes in the instrumentals. The catchy, repeated riff introduced at the beginning consists of a unique, almost exotic harmony that adds to the sleek, chic, and almost retro feel of the whole track. Like “Pretend”, “Yes No Maybe” showcases her expressive vocal quality and wide vocal range well and really proves that Suzy can sing. The fast pace of the song adds a sense of urgency and excitement to the song, which also corresponds to the indecisiveness expressed in the lyrics:

I hate myself for doing this, hate me
I can’t not see you
But I can’t see you either

I also enjoy the low whispers of the yes and no at the end of the chorus as it brings a sense of sultriness to the overall song. I’m very excited for her performance of this title track, since Mina Myoung of 1Million Dance Studio took part in the choreography!

The third track titled “Sick and Tired” features Reddy, the solo rap artist. It has a strong R&B feel to it, with light electronic instrumentals with relaxed accompanying percussion. The rap verse flows right into the song and doesn’t feel odd or out of place at all. I especially enjoy the slightly unusual, almost dissonant, harmony, which perfectly complements Suzy’s airy vocals, giving this song a chilled and modern vibe. This track, like “Pretend”, also plays with effects on the vocals as some parts are layered; this adds to the texture and dimension of the music.

“Les Préférences” is written by Suzy herself, and is a slow ballad featuring smooth and frosty instrumentals. The use of the electronic sounds and the occasional tinkling of the chimes adds to the modern feel of the song, which sets it apart from traditional ballads. The mellowness of the accompaniment once again showcases Suzy’s exquisitely pensive voice. I love how the unique harmonic progression, which seems to employ major to minor chordal progressions, expresses the slight sadness and melancholy of this love song. 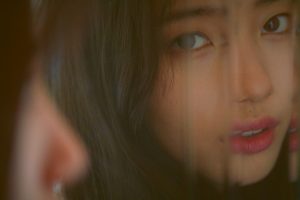 Another one of my favourites from this album is “Question Mark”, which is also written by Suzy. A slow tempo track, it features heavy jazz and bossa nova elements with slight hints of Latin music with the acoustic guitar instrumental and layered vocals. I can definitely picture this playing in the evening at a hotel bar. It’s classy and elegant with just the hint of sultry; and perfectly suits Suzy’s delicate vocals.

For those who like traditional, slow-tempo ballads, then the final track, “Little Wildflower” is for your! The quietness and peacefulness of Suzy’s voice is calming and soothing. Accompanied mainly by the keyboard with minimal percussion and strings, the song conveys a sombre and nostalgic mood, making this to be the perfect listen for the cold winter!

Overall, Yes? No? strays away from the normal pop sounds of K-pop idol music and even from that of miss A’s, instead, it stays true to the chill, laid-back style with heavy R&B influences. I know that I’ve probably mentioned this above in the individual song reviews, but there’s a consistent element of unique harmonic progression that draws listeners in and keeps each and every song interesting. The instrumentals are used well but sparingly which act to draw attention to Suzy’s mature, airy vocals. One thing that really surprised me — in a good away — was the timbre of Suzy’s voice, from her past hits with miss A like “Hush” and “Bad Girl Good Girl”, I expected her voice to taken on more of a bold and strong quality. It’s not that Suzy’s voice isn’t strong or powerful in this album, but she contrasts strength with delicacy to really convey the emotions behind the tracks, which is incredibly impressive. I must admit, at first, I was lukewarm towards the songs on the album, but with every listen, I appreciate and enjoy more and more the unique and different style of this album; Yes? No? a definite yes for me.