Step aside, boys! Mnet has announced it will be broadcasting its very first female-focused rap battle program. The new show, called Unpretty Rap Star, will give eight female rappers the chance to show off their skills each week. Although Unpretty Rap Star follows in the footsteps of the popular rap survival show Show Me the Money, its format is different. Each week, the ladies will face-off for the chance to record on a track presented by Korea’s top producers. At the close of the competition, all the tracks will be compiled into one album that showcases the prowess of female Korean rappers. 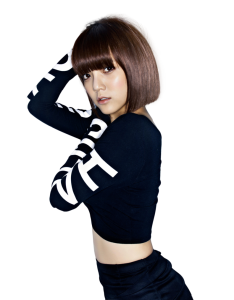 Mnet has revealed four the ladies who will be participating in the program: Jessi, from co-ed group Lucky J, AOA‘s Jimin, Cheetah, and Tymee. Jessi and Jimin stand as representatives for idol rappers. Both have received praise for their skills, and Jessi has even been compared to rap queen Yoon Mi-rae. Recently, Jessi took the stage with Ailee and Hyorin to perform the US hit “Bang Bang,” taking on the tough job of covering Nicki Minaj‘s lines. Both Cheetah and Tymee have represented female rappers in male-dominated rap competitions; Cheetah appeared on the first season of Show Me the Money, while Tymee competed on Show Me the Money 3. With this crop of talented rappers, Mnet has set already set high expectations for what we can expect to see on Unpretty Rap Star. The first episode will premier on January 29.

Readers, are you excited to see ladies finally take center stage in the rap game? What other female rappers do you hope to see in Unpretty Rap Star‘s final lineup? Share your thoughts in the comments!