Prelude, Passion, and Pain in High4's "Day by Day" 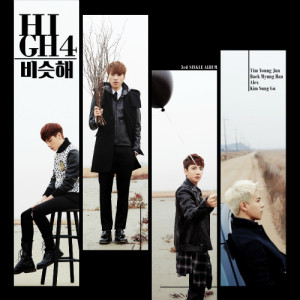 On January 5th, we received a comeback from N.A.P Entertainment’s hidden jewel of a hip hop group, High4. A digital single called “Day By Day” was the frosty fruit of the group’s labour and initiated the New Year on a highly passionate and painful note. I’d like to think that High4 was almost mourning for the tragedy that was 2014, launching an elegiac song and MV devoid of color to create space for other idols to come forward and give us hope for something spicier and convivial.

Debuting in August of 2014, High4 released their 1st mini album HIGH HI. The group entered the K-pop scene with a vernal and sweet MV that featured the crashing-waves vocals of IU and was preceded by “A Little Close,” which featured the mellow and rustic vocals of Lim Kim. 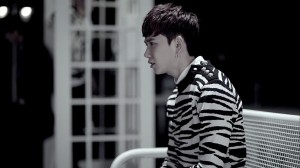 The presence of ebony and ivory as the only two “colors” in the MV intensifies the profundity of the concept. White is “day” and black is “night.” High4 laments the loss of love, and every day goes by the same without color which is extant between day and night. Color is “life” and time is impatient, leaving High4 behind just like their significant other. While time goes by in the song, the MV makes a point of freezing time. We see time, or more probably “memories” frozen in stills that feature a parked car, flickering street light, an open door, a phone booth, and a bike. The focal scene communicates street life, which is the stuff of young love and amusement. The use of a single set further complements “Day By Day” and allows us to focus our attention on High4.

With his American-Korean dualism truly shining, Alex captivates with his resonant rap particularly at the beginning of the MV. Following Myung-han’s heartbreaking and relatable lyrics, we get a real-world retelling of a story within a story;

You left, it’s a sad but true story

But inside we were like a bubble ready to burst

Even if you are not here, I’ll only love you

If our love was ever wrong, I don’t wanna be right

Sung-gu and Myung-han’s harmonization throughout the song sees harmony in the MV as well. Airy, wispy, and pained are the melodies that lead us through High4’s memories. A perfect spotlight hits maknae and rapper Yong-jun, leaning on a lone white table near a lone, porcelain-footed bathtub, at the perfect time. His rapping skills have improved dramatically from “Time out” and “Not Spring, Love, or Cherry Blossoms” when he sounded far too pubescent and unable to enunciate. In “Day By Day,” Yong-jun’s lyrics are the cusp of the entire song, and are done justice by his emotive voice when he raps and is encapsulated by an unmerciful darkness.

Every day I write and erase messages to you

Every day I get lost, I lose the light that you are

I get lost again, I get lost, get lost

“Day By Day” is moderate and honest, it refuses any lavishing and excess both vocally and visually. The concept of time blackening the memories that are created between two lovers, and strengthening day and night which are the “cupid” of those lovers is utilized by High4 in a pained and passionate way.

From cherry blossoms to true love and eliminating distance, High4 have grown up and matured to deliver subtle and sober music. Although “Day By Day” does have a few foibles, including dissonance between the layering of the vocals and rap and the cluttering of unnecessary props, both the song and MV are unique and attention-grabbing when we take the time to understand their meaning and delivery. 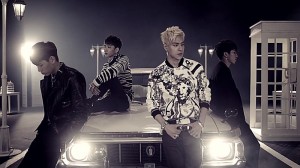 On part of High4, their acting in the MV was executed very convincingly and really gave off a wandering and restless vibe. Only now, Sung-gu’s tears and Myung-han’s forlornness are stirring up the want in me to see them dyeing their hair blue and orange and bounding around saturated streets singing cheerful and cutesy songs!