From a fan’s perspective, 2014 wasn’t the best year for SM Entertainment. What with the multiple member withdrawals, lawsuits, dating scandals and video controversies. These events may have resulted in dropping stock prices, but by no means did they deter the grow, grow, grow mentality SM Entertainment has been pioneering for nearly two decades.

SM is no stranger in attempting to be everywhere, from music to television and beyond. In 2014 the company continued to add to its list of cultural endeavors by opening the first online-fan club with EXO-L, launching the popular mobile phone game SuperStar SM Town, holding concerts all over East and South East Asia and placing their idols on just about every television broadcast imaginable. SM’s power and influence within the Hallyu sphere is almost terrifying, but their willingness to innovate the Hallyu experience is also deserving of some recognition.

In January of 2015, SM Entertainment returned to COEX. This time, instead of a temporary exhibition, they have constructed a “multi-purpose cultural space” called the SM COEX Artium — which is more accurately a six story shrine to SM Entertainment, K-pop and ultimately, Korean soft power. The grand opening, held on January 14th, was a star studded affair that featured SM Idols, a red carpet, hologram ribbon cutting and even an appearance by Lee Soo-man himself.

The cultural space, listed as a tourist attraction, boasts a variety of activities that are meant to showcase the joys of K-pop and allow fans and tourists alike to interact with K-pop in ways they have never imagined. Following through with some K-pop resolutions, this author decided to brave the hoards of fangirls and check out everything the SM COEX Artium has to offer.

The SM COEX experience begins before one has even entered the building with SM Town tracks blasting though the park space adjacent to the cultural center. The building itself is almost all glass, and the entry area feels more like a cenotaph than a tourist trap, with hieroglyphic-like designs decorating the external walls and pillars.

The first floor, or “Welcome Center,” is quite literally just an entry room with two escalators separated by several large screen TVs that loop SM Town videos. It’s nothing spectacular, but I envy SM for making use of the space and the cute little balloon sculptures on the ceiling were a nice touch. 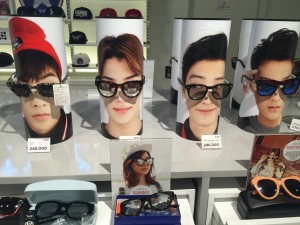 The second floor is home to SUM Celebrity Shop. While you may have to wait in line to get in (and be elbowed in the ribs by pushy fans), the gift shop is definitely worth a walk-through. In true SM fashion, the store is full of treasures you never knew you needed. A $50 EXO dog sweater? Totally. Shinee scented candles? Must have. SNSD member pillows? My room decor could always use a touch of Taeyeon. More seriously, the SUM Shop is where a fan can find any and every kind of SM Town merchandise from albums to posters, stickers, stamps to t-shirts and beyond.

One particularly enjoyable aspect of the gift shop is that SM Artists have graffitied their signatures all over the store. Even if you aren’t buying anything, the space can play host to a scavenger hunt of sorts as you track down all your biases signatures.

The most interactive space in the Artium is the SM Town Studio on the third floor. Here is where a fan can play out their dream of being a K-pop celebrity. The space offers a recording studio, music video set, photoshoot set and supposedly a vocal training area. It’s everything we’ve ever imagined to be inside the SM building sans the iconic cloud wallpaper. For an exorbitant amount of Korean Won, fans can walk away with everything they need to debut, from headshots to their first EP. As one exits the studio, they are graced with a boastful glass display of SM artist awards trophies, as if to remind them of what could have been.

Unfortunately, the studio is the area most likely to be underutilized by visitors. Not only because of the prices, but also because the studio operates on an appointment only basis. Furthermore, the studio itself stands out like a sore thumb in comparison to the rest of the center. There is a swanky front desk and waiting area, large glass doors and an aura of sophistication that demands visitors take it seriously, whereas the rest of the building invites fans to play, interact and most importantly, fan girl everywhere. 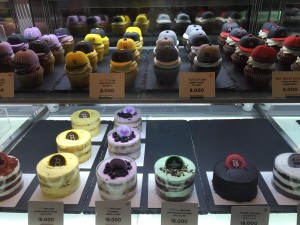 The fourth floor is my personal favorite part of the SM COEX Artium. The LIVErary is a unique and remarkably chill space that fans can gather in to enjoy pastries and coffee, read magazines and even browse various SM Town artist photobooks. It’s the perfect place to loiter before a hologram musical showing or simply to pull out a laptop and do homework (which surprisingly, a few people were doing).

The large open space features the SUM Pop-up Cafe along one wall that sells specialty cupcakes, macaroons and other desserts with each flavor corresponding to a specific SM group or artist. Yes, the cupcakes are about $8, but they are also delicious and it’s fun to indulge that inner fangirl every once and a while with a few extra hundred calories dedicated to the group you love.

The rest of the LIVErary holds various seating options, a SUM Pop-up Store and digital jukeboxes that give visitors free reign on background music — well, your options are limited to SM discographies.

The main feature of the SM COEX Artium is found on the fifth floor, which is home to the SM Town Theatre and hologram showings. The hologram concerts (Girl Story A & B) and hologram musical (School Oz), are perhaps the most innovative and entertaining aspect of the COEX Artium. That does not mean, however, that they are all the fifth floor has to offer. 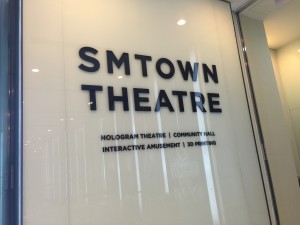 While lingering in the lobby before a showing, you are almost guaranteed to be pushed in the direction of one of the many entertaining activities scattered throughout the space. Back behind the theatre is the Hand Matching station, which is perhaps the most hilariously enjoyable waste of three minutes. SM artists’ handprints line the wall — why Sungmin‘s is the only one made from a left hand, the world may never know — and frame a digital screen where you can select an artist and compare hand prints (congratulations, Key and I are a 92% match!). The floor also has photobooths, a life-size Changmin 3D printing and and a waiting lounge that doubles as an auditorium for fan events – like the Jonghyun fan signing held the same day I visited.

The hologram concerts and musicals are evidence of exactly how much time and effort SM has put into creating forms of entertainment K-pop fans have never experienced before. While School Oz and Girl Story are deserving of their own review, these hologram concerts are truly brilliant. They are not remarkable for their plot, but rather the idea behind their creation. 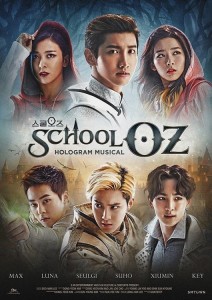 The hologram showings, specifically the 45 minute concerts, offer fans a chance to experience their favorite groups performing, even if it isn’t quite in real life. The holograms are, as expected, quite realistic, and therefore afford audiences a semblance of what a true concert experience could be — without all the high-pitched screaming. The theatre itself is surprisingly small, and that makes everything all the more intimate (well, as intimate as you can be with holograms). These showings are ideal for tourists who are visiting Seoul and may never have the opportunity to see their biases in the flesh.

On a more sad note — and as a testament to how much preparation went into the concerts — these hologram showings will be the last and perhaps only chance some fans have to see Jessica, Kris and Luhan performing with their former groups.

The experience of the SM COEX Artium is quite worthwhile for anyone with an interest in K-pop or Hallyu. One major advantage is that it is totally possible to enjoy the Artium without spending a single penny; entry is free and a good majority of the interactive activities are free as well. Loitering is also not discouraged in spaces like the LIVErary and park. The cultural center offers many unique experiences and opportunities for both domestic and international fans. That being said, if you do have the opportunity to visit, please do not spend 7 hours there like this author did. You will become K-pooped.

While I’m still intimidated by public fan culture, there is something comforting about walking into a space knowing that you will not be judged for the things you enjoy. Furthermore, the SM COEX Artium has the potential to be utilized beyond being a shrine to SM — and this idea is already being explored with the occasional projection of non-SM K-pop videos in the welcome area and a variety of K-pop albums (APink, GOT7, etc) being sold in the SUM Celebrity shop.

A few lingering questions remain though: after the excitement of the opening dies down, how will SM make continued use of the COEX space? There is no question that SM has invested billions of Korean Won into this endeavor, but will they be able to break even? Certainly they plan to use the theatre for fan-meets, but beyond that will the space be able to attract visitors outside of the K-pop sphere? Expectations must certainly be high, as YG has also announced their intentions to open a K-pop “Cluster” in the near future.

Overall, the SM COEX Artium is a remarkable display of not only SM Entertainment’s continued growth, but also K-pop’s ever-growing international appeal. It’s no coincidence that the park area adjacent to the Artium is home to a 2010 G20 Seoul Summit commemorative sculpture, as K-pop and Hallyu have become one of the main forces of Korean soft power in the 21st century.