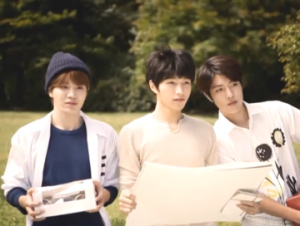 After debuting in Japan, Infinite F is now back to K-pop with a Korean version of “Heartbeat”. The music video is not excellent or ground-breaking in any sense, but some may still find it enjoyable.

Overall, “Heartbeat” itself is not a bad song; but it would not make a memorable one either. It is definitely a far cry from the usual intense and catchy vibe of Infinite’s music style, which is also a good thing. This distinctiveness allows people to remember this sub-unit as a separate group with its own sound, instead of a less crowded version of Infinite. The melody is sweet and lively, though nothing sounds particularly impressive. The boys harmonize well, though no singing parts are particularly amazing.

At least the video is quite lovable and cheerful, like a warm breeze of spring full of flower fragrance and flower boys. Exactly like how Woollim Entertainment has designated Infinite F to be: “the concept of Infinite F is youthfulness. This music conveys to you pounding heartbeats when young people are deeply in love, a bright future, and an overwhelming feeling of dreams and ambitions”.

Indeed, “Heartbeat” carries a very dreamy and happy atmosphere. In this video, it seems like L is a painter, Sungyeol is a musician/pianist, and Sungjong takes the role of baking. The three members start out looking contemplative in the first few seconds of the video, and Sungyeol frustratingly throwing away a piece of paper to indicate a creativity block. Then the music plays as if on cue for magic to happen. Subsequently, the audience see that out of the sketches drawn by L, a piano, an amplifier, a fridge, and eventually a huge air balloon take turn to pop out like in a fairy tale (or in a CF), while our three boys look so adorably amazed at what is happening.

It has been a while since a K-pop music video adopted an “Alice in Wonderland” theme in this soft, delighted manner, and I love the air balloon ending scene. This approach could really be a pleasant and refreshing change if it wasn’t for the fact that the Korean version is almost 99.9% identical to the Japanese one. This magical world idea was originally meant for the Japanese market, as Infinite F’s initial plan was to debut in Japan only. However, after venturing far enough to see that this so-called “leftover” sub-unit has done a pretty OK job overseas, Woollim brought the boys back to their motherland — a more familiar, but also harsher, place. Yet conveniently, the company still applies the same old package to this new challenge without even bothering to renovate their product at all.

Was Woollim lazy or they just did not have enough money and time to invest in modifying this video, I do not know. However, for sure my excitement did cool down significantly after I first watched “Heartbeat”. The song was introduced long ago, being the OST of the drama High School-Love On featuring Woohyun and Sungyeol. And now, even the music video is repeated. As an avid Inspirit, there is literally nothing new for me to enjoy. 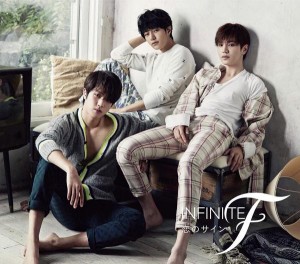 Besides, I am vehemently against the outfits of Sungjong and L are wearing at 2:22. This is not the first time Infinite’s maknae has had to suffer from his stylists’ experimental fashion, as we have discussed how his feather head-gear has looked so ridiculous in “Man In Love”. Both L and Sungjong’s garments are taken straight out of their promotion photo shoot, as you can see in the picture on the right, which means they both are definitely pajamas to be worn indoors and not an outdoor dancing outfit as we have seen in the video. Side-note, good job on Sungyeol, Woollim.

To add on, the dance from 2:22 to 2:34 is disappointing. This sub-unit consists of the three vocally weakest members of Infinite; therefore it is totally understandable if they choose to sacrifice Infinite’s famous sharp moves for the sake of singing properly. Still, the choreography here resembles an aerobics exercise a bit too much.

What really saves this Korean release are the live performances. Despite being a little let down by the official music video, I am quite pleased with Infinite F’s stages so far. No over-the-top outfits, a not -too-difficult but still charming and well-coordinated dance, and, above all, the boys’ commendable efforts to sing live. Of course, L still has to sing about 60% of the time, since he is the best technique-wise (or least worst), but both Sungjong and Sungyeol pull off their lines fine without any noticeable mistakes.

It is extremely unlikely that Infinite F’s debut is going to blow everyone’s mind, and it probably would not even reach the same level of Toheart or Infinite H in terms of attracting attention from non-Inspirit fans. Nonetheless, the three boys, especially Sungjong and Sungyeol, deserve our congratulations for having stepped out of their comfort zone and having earned more spotlight time for themselves.