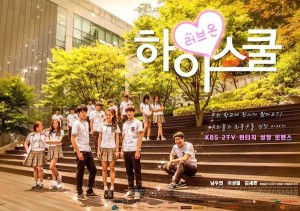 If you, like me, are an ardent Infinite fan, High School – Love On would have been on your radar for a variety of reasons, the most important being that the two lead actors are Woohyun and Sungyeol. For those uninformed, High School is a romance fantasy 20-episoder in a high school setting.

The main premise is that Seul-bi (Kim Sae-ron), who is originally a death angel (think Scheduler from 49 days), becomes human after unintentionally saving Woohyun’s life; she goes to high school, and hijinks happen. Oh and, Sungyeol and Woohyun keep their own names as their character names.

Four episodes in, High School strikes me as School 2013 – Fluffy version; I guess high school dramas all fit in roughly the same mold, with a varied amount of angst. It has the two main leads with opposite personalities and a potential conflict – Woohyun’s long-lost mom is now Sungyeol’s stepmother, whom he blames for chasing his birth mother away.

Initially coming across as a character who couldn’t care less about the world, Sungyeol has a soft spot for Seul-bi and we get a glimpse of his thoughtful demeanor beneath his tough exterior. He’s currently the more enigmatic and mysterious character, since Woohyun is still the boy-next-door transfer student who has yet to set his roots down in the new school. There’s the sweet and innocent girl, who somehow stirs the protectiveness in both boys, and has the added challenge of returning to her angel world. And don’t forget the never-ending line of girls falling for the leads, the school jjangs who have to bully everyone in sight, and the complicated web of relationships entangled all over. 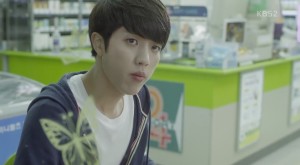 With a bunch of pretty green actors, it’s no surprise that the acting in the series is nothing to write home about. Kim Sae-ron is the absolute star with her adorable angel-in-human-body character and hilarious expressions. Her wide-eyed innocence mixed with awe and naivety makes for many laughable as well as sympathetic moments.

Woohyun is serviceable as the boy-next-door – nothing that really requires any serious acting chops. But his character is likeable anyway so it’s easy to root for him. In my opinion, Sungyeol’s challenge is way tougher, and he has been doing an impressive job. His kurt and no-nonsense character is a total 180 degress change from his off-screen choding personality so often seen in variety shows, and he’s pulling it off believably.

Right off the bat, the drama seems to be in a decent place, with many characters who are potentially diverse and nuanced enough to keep my interest — the (very handsome) bully has an unrequited crush along with requisite family angst, the male classmate who hints at a romantic interest in Woohyun, and the mysterious sunbae who is secretly looking out for Seul-bi. So far, the male characters are much more engaging, and the female students seem to only serve as fawners over the boys. Hopefully, they all get their limelight eventually, beyond that of rather one-note characters. 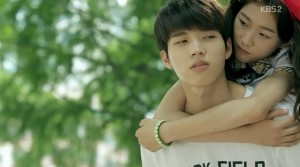 High School has to capitalize on the ensemble cast of students it has; it will fail dramatically if it focuses only on the leads and Seul-bi’s quest. High school drama typically clicks well with viewers if done right, since it brings back all that nostalgic friend cliques, bromance, unrequited crushes, life epiphanies and such.

It has a lot of potential for all these warm fuzzy feelings, and I want to be on this maturing journey along with these characters. I especially appreciate how the drama includes slice-of-life details — such as arguing about speed dials and seating arrangements– leading to a more lived-in and authentic drama world.

The plot is nothing out-of-the box; most of the developments can be predicted from a mile away, occasionally unrealistic, and needlessly repetitive at times. The near-drowning incident, the cheating incident, the sick grandma, the suicide attempt – all very typical tropes, not meant to be read too much into. What makes it work is that the enjoyment of the drama is not from the plot per se, but on how the plot pushes character development and layering.

One thing that’s disappointing is that High School is a once-a-week drama, meaning a lot of impatient waiting. But it’s probably what works best given the new changes in the law for minors, as well as Infinite’s crazy schedule. 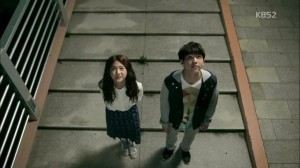 Another thing that bothers me is the 9-year age gap between Kim Sae-ron and the boys. The cute chemistry they have right now is very similar to an oppa-dongsaeng relationship, and I can’t foresee any romantic entanglements being very convincing.

In any case, given that it’s a feel-good drama with a guaranteed happy ending for most of the characters, all that matters is the satisfying process, and I definitely can commit an hour a week to check that out.

Granted, though, I would not be watching this drama if not for the cast; the writer indeed knows how to constantly let the boys be the heroes who save the day in the most swoon-worthy manner, and I guiltily eat up every moment no matter how cliched it is.