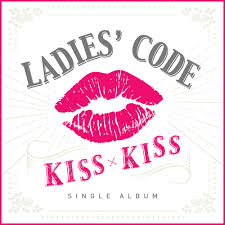 One of 2013′ s standout rookies, Ladies’ Code has launched their second comeback of the year. Well-known as a vocal group, the quintet may soon find themselves equally known for their bright, zany concepts.

Their latest offering, “Kiss Kiss,” bears a strong resemblance to last years’ “Pretty Pretty.” Though, that’s not much of a shock, considering “Pretty Pretty” outsold their other three singles combined. And in all honesty, the ladies of Ladies’ Code seem much more comfortable with the bright and wacky concepts over the dark and creepy tone that has dominated their other releases.

“Kiss Kiss” is a very enjoyable song. Upbeat and bouncy, it strikes a balance between pop fluff and vocal showboating. One of the most frustrating things about vocal groups is that most tend to stick to mid-tempo and ballad numbers, as traditional logic holds that mainstream pop can’t really utilize strong vocals. “Kiss Kiss” doesn’t hold to that logic, letting the strong voices really shine. It’s a definite earworm of the silly love song variety, with the members of Ladies’ Code worrying over their first kiss. It’s almost a guilty pleasure, but it’s too fun to really feel guilty about.

That said, this is one of the few K-pop songs that I feel is hands down better live. The post-production work on “Kiss Kiss” drags down the song as a whole. It has a tinny element to it that makes it sound like you’re listening through really crappy speakers, no matter what. When sung live, on the other hand, that bad-speaker element is gone. Given that Ladies’ Code is both vocally talented and has good stage presence, watching a live performance definitely gives a better version of the song.

The MV is one of a more unusual breed, in that it has a plot, but not a linear narrative. Instead, each member is given scenes where they show different variations on the songs’ lyrics. The whole thing is filled with fairy-tale allusions– mainly The Frog Prince and Snow White. These fit with the idea presented in the lyrics. Ladies’ Code may have never kissed before, but that doesn’t mean they don’t want to. It also doesn’t mean they’ll accept any old kiss for a first kiss. This is important, damnit! There are standards to be observed here. 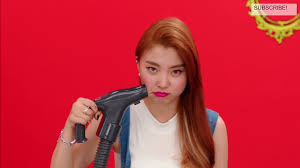 Of course, wanting a fairy-tale perfect first kiss shouldn’t mean you have to wait around for your prince to finally show up. Ladies’ Code decides to take matters into their own hands. They kiss buckets of frogs, poison some apples, and volunteer for a little shoot-the-apple-off-my-head-action, a la William Tell. And yet, none of it works. The frogs are just frogs, the apple poison is a smidge too effective and poor EunB has two dozen arrows fired at her head for nothing. You can feel the mounting frustration that this isn’t working.

Intercut between the fairy tale scenes, we’re treated to some usual but still funny slapstick, focused on the elements no one really thinks of when it comes to epic romantic kisses. After all, what good is the proper setting if your breath still tastes like lunch? The various ladies desperately reach for their toothbrushes and mouthwash, sneak around the others in an attempt to get their kiss first, and actively sabotage their friends. It works, though, cranking the zany up to eleven and creating an entertaining mindscrew.

It’s almost a self-parody of the whole notion of wanting that perfect first kiss. It’s just not how life works. No matter how hard you try, reality will never be like the fairy tales told to young children. But that’s a lesson you can only learn by growing older, which is why I say “Kiss Kiss” is almost a self-parody. Unlike parody in general, it doesn’t work if the portrayer isn’t in on the joke. To be a true self-parody, the people doing it have to knowingly poke fun at themselves. Ladies’ Code is portrayed as taking the subject seriously, which just barely knocks them out of self-parody territory. 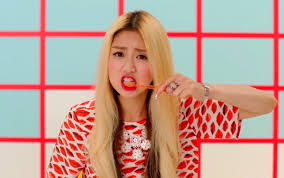 As a whole, “Kiss Kiss” is a good piece for the young group and promises a return to the fun and lightheartedness that they do very well. The only real flaw in “Kiss Kiss” is that Polaris got a little too close to the style of “Pretty Pretty”.

It’s one thing to have recognizable elements shared across songs. Where would Infinite be if not for their signature ’80s pop sound? But “Kiss Kiss” doesn’t just share some musical elements with “Pretty Pretty”. The songs are uncomfortably alike, almost as if “Kiss Kiss” and “Pretty Pretty” are simply alternate versions of each other. Bands ripping themselves off is nothing new, but Polaris could have at least tried to hide it.

At the end of the day, “Kiss Kiss” is bouncy song that might not change the world, might sound a bit too much like another song, but is still something good to jam to. If nothing else, it’ll go well on a summer playlist.