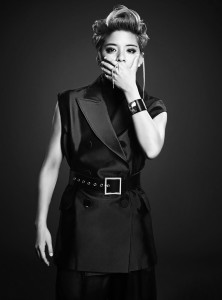 It appears that SM Entertainment is intent on showing the world that, no, they do not discriminate against their Chinese (and Taiwanese) idols. Following Henry‘s debut last year and Zhou Mi‘s some weeks ago, news came out today that Taiwanese-American f(x) member Amber would be the next idol to continue the solo releases from SM.

A few hours later, SM confirmed that a solo release for Amber was indeed in the works, though there is yet no set release date. Even so, February 2015 has been presented as the likely time for her solo début. While Amber will be continuing the trend of non-Korean idols making solo debuts, she will be the first soloist from f(x), and the first from a girl group (since CSJH).

As an international fan favourite, there has been a lot of good cheer in response to the news. However, thoughts have also turned to other f(x) members — namely Luna, whose main vocalist position would seem to make her the obvious choice for a solo venture. But who knows? If SM continues with its Oprah-esque attitude of solos, solos for everybody, it could be her turn soon. Though I feel like we may be seeing Tao and Lay solos first.

Readers, are you looking forward to Amber’s solo début? What do you think it will be like? And who do you think will be next?