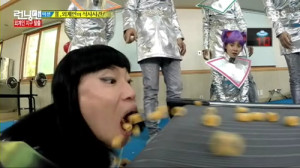 For the past four years, 5 Things has been a vehicle to express my love and thanks for the enjoyment that K-pop has brought to my life through its songs, dramas and varieties. It’s my way of sharing the things I’ve come to enjoy in K-pop with other fans in the hopes that they will find similar happiness through these things.

To Seoulbeats’ fans in the US, Happy Thanksgiving to you and all those you cherish.  To all of our readers in other countries, here’s to hoping you also had a special day with all those you are thankful for. Thank you all for your continued support and love for Seoulbeats. And now, on to 5 Things.

Season four of K-pop Star debuted last week and while it wasn’t a mind-shattering debut, Star has always been able to uncover some great talent and I’m excited to see what the show will have in store for us this season.

Nicole, formerly of KARA, made her solo debut with the release of her EP First Romance and the MV of the title track “Mama.” The MV for “Mama” was solid, but nothing really stood out about it. Nicole was one of my favorite members of KARA, so I’d like to see her do well, but I just don’t know if her debut album is strong enough for her to continue successfully as a solo artist.

3. It ain’t easy being green

Purple, a conehead, or an alien… In the latest episode of Running Man, the cast went intergalactic in their ‘Running Wars.  To be able to ‘phone home’ the members had to complete various mortal tasks including eating 100 crackers off of a treadmill. Although this looks fun and definitely brought the laughs, I would recommend that you DO NOT try this at home — even if you have a Gae-opatra to hold your head.

2. Jumping on the bandwagon

I’ve finally climbed aboard the Liar Game bandwagon. The Korean remake of the popular Japanese manga of the same name, written by Shinobu Kaitani, has been interpreted well as a fast story with twists and turns around every corner. Lee Sang-yoon and Shin Sung-rock are captivating as the main foes in the game with Kim So-eun and Lee El also putting in fine performances as the heroine and … evil witch? The main reason I wasn’t on board earlier was because it really is a drama that needs your whole attention when watching and I just didn’t have the time — but I made the time, and it was worth it.

YG Entertainment‘s first of their recent end of year sub-unit collaborations was between Lee Hi and Akdong Musician‘s Lee Su-hyun, featuring iKON‘s Bobby, and their song “I’m Different.” I must really be a visual type of person because when the song came out I thought it was okay, but when the MV came out it was a whole different story — I LOVED it.

The MV is similar to the type that Akdong Musician usually releases — a cute little unrequited love story — it’s almost like a micro K-drama. In the MV, Hi and Su-hyun are friends who live in the same neighborhood. A new boy moves in and the two start crushing on him, and also become mini stalkers. Thankfully, Lee Hi’s acting skills have improved a lot, making it an enjoyable MV and totally increasing my  appreciation of the song.