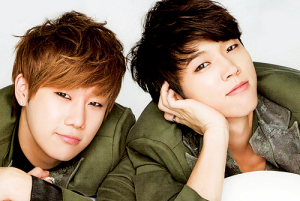 As a 7-member group, Infinite is possibly one of the most diverse groups out there in terms of the various preferred styles of the members. Judging from the various projects that the members have participated in, Infinite is no doubt a group with a wealth of possibilities. From the cool and slick hip-hop duo Infinite H, to the cheesy Toheart collaboration, there’s almost no whiff of the 99.9% synchronization group that we’re so familiar with. With the impending debut of the popular maknae’s line Infinite F, let’s take a look at other potential sub-units that could be something worth exploring.

Also widely known as the Woogyu couple, the vocal sub-unit is one that fans have been clamouring for ever since Day 1. So far, Inspirits have only been teased with special collaboration duets, which are already pretty darn spectacular. It was probably disappointing for a handful of fans that Woohyun’s Toheart album was released before Infinite V’s. Considering that fans and members alike have pretty much already acknowledged the moniker Infinite V, there’s perhaps hope in the distance that we could have an album released from the duo. And the fact that the two of them are best friends and understand each other better than anyone else already serves as a great motivation and a lead-up to perfect chemistry on stage.

As the main and lead vocals of Infinite, there’s no denying that both are extremely proficient and stable vocalists, who have a clear idea of how best to showcase their voices. What works even better with this duo is that the two voices complement each other perfectly. Sunggyu’s voice has an unique, varied colour depending on which register he sings in, and his slightly whiny and pitchy tone can be wonderfully balanced off with Woohyun’s stable vocals. And while Woohyun’s natural vibrato is his asset, his less agile tonal quality can be compensated with Sunggyu’s wide range of vocal texture. Together, they pretty much turn fans to mush.

While we’ll be seeing L lead his maknae line with a bubblegum pop style with the sub-unit’s debut album in a few weeks, it’s evident to most fans that acoustic songs is where L’s strengths lie, what with his love for playing the guitar and his anime-like voice. His solo stages usually revolves around acoustic ballads, and its cleaner song texture mellows out his nasal vocals quite well. Not that he wouldn’t be able to do well alone, but Sunggyu is a fellow member whose voice would suit the acoustic genre perfectly. And in this case, their similar vocal tones and ranges would further support each other and provide a clearer sound for the song.

While in general Infinite seems to have shown quite an affinity for pulling off acoustic songs perfectly, technically any combination including Sunggyu and L would work. And I say this mainly because the two of them seems to be the most capable of harmonizing with other members (and each other), and this harmony is what really anchors the success of this subunit.

When I first made this list, I definitely didn’t expect Sunggyu to appear this much. And in retrospect, it makes sense because Sunggyu’s voice is somewhat like a chameleon — he knows exactly how to stretch and change his voice so that it can come off in a certain way. Rock ballads, R&B ballads… he can do all of them.

Hoya is one of the triple threats not commonly found in K-pop, excelling in dancing, singing, and rapping. His raspy yet smooth voice makes him a natural shoo-in for the R&B unit. While his rapper foundation allows him to easily groove along to the beat, his unwavering and clear voice is also further highlighted with the simple melody of the song. Sunggyu would be able to tone down his vocal gymnastics and pitchiness, bringing out the honeyed texture of his voice to mesh splendidly with Hoya.

Since the maknae line have their own subunit, it would make sense to form one from the hyung line as well. And since Infinite H is already taken, I would just have to make do with Infinite M.

The one unit I would definitely recommend is that two mat-hyungs of Infinite — Sunggyu and Dongwoo, although you definitely wouldn’t be able to guess Dongwoo is the second oldest of the group. With their recent “Back” promotion, where Dongwoo took some very challenging lines worthy of a main vocal, it further proved that Infinite H’s members are both triple threats to be looked out for. And while Dongwoo’s official role is the main rapper, his lower vocal range is one that could pick up wherever Sunggyu would falter and vice versa. Considering that Dongwoo once chose Sunggyu as the other member he would want to form a unit with, insisting their voices go together really well, I’m now left wondering at the different songs they must have practiced together to have realized that.

While Infinite H often features other vocalist in their raps, and Sunggyu has featured for rapper Kanto before, wouldn’t it be quite a collaborative internal effort for them to feature each other? The possible by-products of this permutation are endless. A rap ballad? A hip-hop genre track with the main vocals as featurings? The type of tracks released could be pretty groundbreaking for an idol group. Imagine “Special Girl” with Sunggyu, Dongwoo, and Hoya…

Sungjong on keyboard, Dongwoo on bass, L on guitar, Sungyeol on drums, and Sunggyu can fulfill his dream of being the lead singer of a band. So far, Infinite Band has only played “Over the Rainbow” and “The Chaser” before, but without the role of a vocalist. Add the lead singer, and we could possibly see a group that could rival CN Blue. Of course, it definitely depends on the material given, but whether they merely do a remake of existing songs or produce new tracks, I think this could be a fun sub-unit that would be popular with the masses.

A unit that was specially mentioned by Hoya, who wanted to collaborate with Sungjong for a seductive sexy concept. Although I have yet to be enlightened as to what type of songs they would perform, I think Sungyeol would be a great addition to the team. The three of them can definitely create some electric energy with their 100% commitment to their concepts, and the chemistry and sexiness would be off-the-charts. Their stage would be an interesting mix between the two following performances, and yes, the “Troublemaker” stage never gets old.

The boys of Infinite often refer to themselves as the 7 colours of the rainbow that can come together as one. But based on how they are split and grouped, a very special result would arise each time, similar to how different colours mix to become a totally new colour. While it’s unlikely all these sub-units would get to make their own album, I think a track on an album, or a special stage for a concert would be enough to satisfy the fans.

What are some of the Infinite subunits you are hoping for?