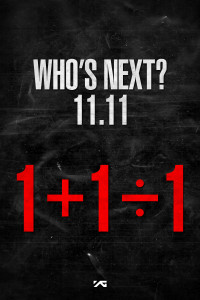 Following the comebacks of Akdong Musician and Epik High, YG Entertainment is continuing the “Who Is Next” trend this month, releasing a series of consecutive teasers over the course of the past few days hinting at a co-ed unit. The first teaser featured the equation 1+1÷1, followed by the replacement of the 1’s by three images, showing two female and one male artist each holding a box of Pepero. The centering of the teasers around the biscuit snack most likely corresponds to the date of release — November 11, Pepero Day in Korea.

Despite criticisms of YG’s media play, the teasers have garnered significant attention with flocks of people speculating who these images may be depicting. Earlier predictions suggested a collaboration between CL and Dok2, which stemmed from pictures on the latter’s Instagram hinting at the two working together.

Other names were also flying around, including Dara, B.I and Jang Han-na. Now the majority of guesses have shifted to Lee Hi and Akdong Musician (Lee Chan-hyuk and Lee Soo-hyun), the reason being 1+1÷1 is equal to 2, which is pronounced the same way in Korean as the surnames of all three artists: Lee. 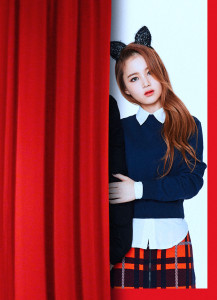 So far, the newest teaser image confirms Lee Hi as a member of the unit. While she’s been on stage lately with Epik High performing “Happen Ending,” this will be her first release since her collaboration with Park Bom last year. The reveal has also strengthened notions that the unit will consist of her and her fellow K-pop Star contestants from a different season, Akdong Musician.

Readers, what do you think? Have detective-like netizens once again been successful in solving the mystery? Or will there be a reversal?