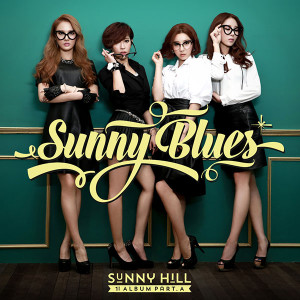 It’s been a year since Sunny Hill has released any music. This time around, fans are being gifted with the group’s first full-length effort, albeit it seems we’ll be getting it in two parts. If Part A, titled Sunny Blues, is our first taste of what kind of music this latest lineup can offer, fans have much to anticipate.

The album starts with an upbeat sort of summer track. “Player” is your typical girl jam, you and your mates gossiping about the playboy that everyone can’t seem to stop talking about. His exploits are well-known far and wide. His short temper and penchant for philandering, however, seem to fall by the wayside as a woman steals his heart: “What to do with this girl, I’m losing my mind. This person is messing me up. I can’t help but falling in love. It’s not a good sign, but I’m falling for you, it’s so sweet.” Though the song seems to be from the point of view of our arrogant player, it’s clear sparks are flying on both sides, and by the song’s end the two have decided to give it a go.

“Monday Blues” is everything but a melancholy love song as the title may allude. Instead, we get an upbeat lament about how slowly the weekend comes and, inevitably, how quickly it disappears once the clock strikes the end of the work week on Friday. Indeed, it’s a feeling we’ve all felt. Almost time for work to end, suddenly you find yourself with another pile of work to do before you can even clock out.

It’s Monday, but the weekend is still stubbornly clinging to your bones, and as soon as that clock hits six, the only thing our protagonist can think about is letting her hair down. Of course, she needs someone to do it with, someone willing to forget about their fatigue for a while and have a little Monday night fun:

I’m not calling you back, I don’t wanna pick up your call
I barely got my mood up so stop trying to bring me down
What do you wanna do tonight? Don’t you wanna play with me?
Do you have time today? Who cares if you’re a little tired?

A heart pounding Monday evening.
10 minutes before work ends (no more blues). It’s a party time.
Worry about tomorrow, tomorrow.
How about you?

Time keeps speeding up whenever Friday comes.
Faster than a bullet, faster speed.
Just ignore everything and pretend to be crazy for a day.
We’re strangers to each other anyway.
You are Mr. Stranger.

However, the next track is by far the album’s most intriguing. At once playful and yet scathingly accusatory, “Get the X Out” is somewhat open to interpretation. While the first two songs have a definite message, this song’s title gives very little hint as to exactly what these women want you to get out of it — surprising, considering the title itself is rather straightforward. However, that may very well be the beauty of the track. We get a title that suggests this woman is fed up with someone in her life, and, to a point, that’s exactly what the lyrics are about. It’s obvious this person — presumably a lover — has worn out his welcome. However, whether that’s because he’s become overbearing in his expectations of his woman, or he’s become so completely boring that she’s lost her patience is up in the air.

On the one hand, we have lyrics such as, “I’m suffocating, I’m suffocating, am I eating up other people’s looks?” which hint to the latter possibility. But the beginning of the song informs us that everyone around her is asking why she would want to leave, hinting at the former. In the end, though, it’s clear she’s had enough. Whether it’s to escape the boredom of a relationship that’s just become complacent or to rid herself of the expectations everyone, including her friends and family, have of her to conform to what society has deemed “her place” is up for debate.

“Love Cell” seems to be a counterpoint to “Get the X Out,” a song about our female lead being strapped into another unsatisfactory relationship with someone who she’s quickly grown bored of. The idea of romance seems to put her to sleep. She may love him, but the whole dramatic romance is just so unappealing to her:

There is no answer to this.
I’m not moved even when watching dramas.
I fall asleep so easily.
When I think about going out, I get tired all of a sudden.
I want to be the main character of a love story like Gossip Girl,
But that kind of story is too far from me.
Whatever, I don’t know, deep sleep.

With the help of Brown Eyed Girls founder JeA, their former label mate, “Paradise” is another tune about the dregs of the work week and the anticipation of getting out of the humdrum life they’re strapped into. It describes the perfect place for leisure, a place to get away from it all and feel free, if only for a day: “A cool cocktail, under the shadow, a sun bed, like the breathtaking and shining sun, my dazzling paradise. When the wind blows over the ocean and sings a song, I feel so free, all right.”

It makes sense that “Once in Summer” was the lead single. It bucks the trend of the rest of the album of a woman expressing her unerring freedom with or without a male companion. However, for a group who once had a male member and is now fully committed to venturing out as a girl group, female empowerment is a risky concept to sell. The song is a pretty, tinkling tune about (what else?) a summer romance. Our protagonist meets the gentleman and regales listeners with the tale of her “summer boo,” and further how much she misses him now that summer’s over.

Thinking about it makes me laugh, the memories make me feel refreshed
I love you, I’ll never forget you and I’ll always cherish you

Right around now, I miss you
As I open an old book and hold onto your picture

It also comes as no surprise that the music for the track is a play on Johann Sebastian Bach’s “Jesu, Joy of Man’s Desiring,” a classical piece used for wedding processionals. Not at all very subtle, there, ladies. But, hey, women (and men) have and always will fall in love. And the flirtatiousness of summer romance sometimes leads one to imagine wedding bells.

Sunny Blues seems to have a bit of a “Girl Power” concept. The ladies are making players denounce their player ways, they’re kicking out the men and the mindsets that bore them, rolling their eyes at dramas. It makes sense, considering this is a group who’s without the male element. They want to make a statement that they are strong-minded, strong-willed females who don’t need men to fulfill them emotionally or intellectually. That’s a concept I can rally behind; however, the lyrical content tends toward the redundant at times. The music was nothing groundbreaking, though the use of some very clever composition with songs “Get the X Out” and a nod to ’60s doo-wop with “Love Cell” keeps it from becoming too terribly mundane.

Sunny Blues is a decent first full-length album for Sunny Hill. As the group continues to establish itself as a female quartet — member Kim Jang-hyun taking his leave to focus his efforts on producing — one can only hope they can offer fans more mature music to go along with their mature look and avoid the pitfalls of every girl group that gets lost in the fray.