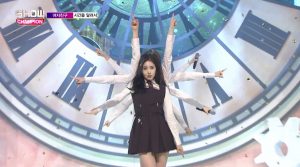 Time travel is a thing of great fascination in South Korean entertainment. It is a present and popular theme not only in K-dramas, but also K-pop. There seems to be a great human desire for time travel for many reasons. This is clearly expressed by James Gleick in that quote from his book.

Why do we need time travel, when we already travel through space so far and fast? For history. For mystery. For nostalgia. For hope. To examine our potential and explore our memories. To counter regret for the life we lived, the only life, one dimension, beginning to end. — James Gleick, Time Travel: A History

IU’s “You and I”, “Return” by Lee Seung-gi, Sunny Hill’s “Child In Time”, and most recently, GFriend’s hit, “Rough,” explore this longing for travelling through time. In these songs, they want to travel back in time because of the memories of a rose-tinted past, or perhaps, because they see the future as their true home.

Both “Return” and “Child in Time” examine the aches for the past. “Return” conveys someone reminiscing over a lost childhood love. He goes back in his mind, going over memories of his first love feeling as if they were yesterday. In the lyrics, he appears so lost in the past. Seeing it so clearly compared to relationship struggles in the present have made him look back to “the one that got away” during the times when things felt so easy and simple.

Lee Seung-gi does not seem to be completely swept away in a sea of utter nostalgia. He questions whether he truly loved her. Was his love was just childish, or were they actually happy? It seems that he still desires to be back in that time and place. Near the end, he asks a sorrowful “Where are we now?”, as if he wants to still believe in those joy-filled memories of his past and wants her to come back.

In the same thread, ”Child in Time” expresses nostalgic feelings and emotions. Sunny Hill regards the present as a disappointment of many young adults about life. The struggle to survive in the “real world” is overwhelming and stressful; nothing like the life as they thought it would be. The poignant lyrics communicate the universal pain of the change, loss, and responsibility that growing up brings. There is this strong longing expressed for the simplicity of childhood — its lack of responsibility and its joy for “the happy times.” It is all summarised in the lyrics,

I wish I was a time traveler, even if it’s for a day
I want to remember my heart back then and smile 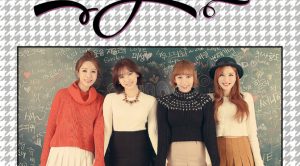 In the song, time travel is a solution to the problems, a salve for all the pain of their present life. Of course, time travel is not possible, making this song deeply sorrowful and haunting. It feels like Sunny Hill believes that their childhood was something they under-appreciated. This goes back to the thoughts of James Gleick in the quote, that one of the reasons for the desire for time travel is to offset those regrets we have in life.

There are more positive portrayals of time travel in K-pop, with “You and I” and “Rough” looking towards the future. Although both songs are very similar lyrically, “Rough” and “You and I” each describe not being able to be with a particular someone in the present and wanting to time travel to be with that person.

Gfriend’s ”Rough”, which was interestingly enough inspired by a film about motions through space – – Girl Who Leapt Through Time — is from the viewpoint of a schoolgirl. For the last song to complete Gfriend’s high school concept trilogy, the song is about the girl who is struggling to get closer to someone. they are cleverly described in the lyrics as being like “parallel lines”. Instead she sees the future as her only hope. She wants to be the female lead in the film who has the power to “time leap” at her own choosing and uses it to solve her problems. The song is filled with the youthful, strong belief that the future will be much better. There is also a hint of naivety in her want of heading off to the world to come when she says “Promise me, I hope you don’t change.” 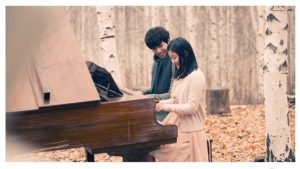 For her, clearly the future is a fulfillment of long held dreams and wishes. The girl even goes on further to consider being trapped in time because of difficulties with time travel, however, she remains hopeful, believing that they will eventually meet at some time. Time travel once again seems like an escape for Gfriend. They are talking about “if only”, and it is evident here that she is facing many struggles. In contrast to Sunny Hill’s “Child in Time”, she believes that the future will mean them feeling more secure and at ease.

I turn it with my fingertips – hey clock hand, please run
Turn a little bit faster
I tightly close my two eyes and cast a spell 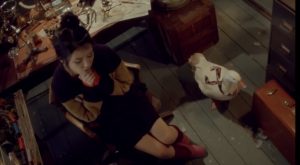 ”You and I” by IU follows a very similar storyline to “Rough” since the song is also about a girl who cannot be with someone but believes it can work in the future. On the show, Yoo Hee Yeol’s Sketchbook, IU revealed the song to be a story to her future boyfriend, explaining that “since I’m turning 20 in less than 3 weeks, I wanted to say to my future boyfriend to wait until then.” So in a way, time travel in the song is shown as a demonstration of love to a future boyfriend. Interestingly “You and I” is the only song in which time travel actually does take place due to the fairytale themes that play out quite frequently in IU’s songs. In a playful tone, she describes to speed up time and the mix of fear and excitement that she feels. Going back to the quote, both “Rough” and “You and I” regard time travel as an expression of hope in the future, in that “someone”, in themselves and the endurance of love itself.

We all at one point want to have a time machine. However, it does not exist, so we are restricted to our imagination, which is truly fascinating for us as humans. As we have seen in these songs, it can be heartbreaking for some, but for others it can be a truly happy exprience. I know I am not the only one who wishes for it to exist.