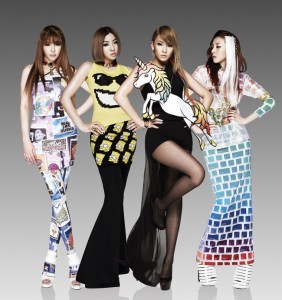 Across the K-pop industry, one can find a wide variety in the sizes of groups. From as few as 2 or 3 members to as many as 10, 11 or more. From mere duos up to soccer-team-sized groups, all idols must address formation when it comes to their choreography. Should they play up symmetry and divide evenly? Should they create a pyramid with audience eyes drawn to one person singing? Should they bring in back-up dancers to balance out their numbers?

There is really so much that artists can do when it comes to formation. So let’s talk odd and even numbers specifically. We have groups such as 2PM, DBSK, 2NE1, and T-ara on the even side and groups such as BtoB, Shinee, Orange Caramel and Rainbow on the odd side.

Leslie: Let’s start simple: What type of choreography do you find yourself enjoying most — odd or even? And why?

Gaya: Odd is pleasing to the eye: it allows you to place an idol literally at the centre of attention while also creating a pleasant symmetry around them with the rest of the people on stage, where every member can be seen. With even, you cannot have both: go for symmetry, and the one idol singing at that moment is off-centre; put that idol in the middle, and you have to hide another member to achieve symmetry.

But, that challenge is exactly why I prefer even over odd. Necessity is the mother of invention, and it’s exciting to see the ways choreographers try to overcome this dilemma between focus and symmetry. Sure, it may not always work, but when it does, it’s brilliant!

Lo: I’m weird in that, for me, odd vs even depends on how many people we’re talking about. Six or fewer, I prefer even numbers, as there’s enough space on the stage to get creative with your staging and choreography to put out some quality moves without hiding anyone. Seven or more, though, and odd becomes the way to go, if only because it forces more usage of the stage depth than even numbers usually do.

Cjontai: I agree with Lo in that odd or even depends on the size of the group. It also depends on the type of choreography itself. If you’re trying to create a visual with formation changes, it looks a lot better with a large, odd number. However, if the intent is to give more shine to individual members during their parts, then small, even numbers are an advantage. Odd or even, it’s really about the size of the group to me. After all, they are the main focus, so if they have backup dancers to fill up the space on stage, then being odd or even is practically irrelevant because you’re looking at the big picture.

Leslie: I definitely agree that the size of the group makes a big difference. For a duo such as Tasty, they need back-up dancers to fill in space whereas a much larger group such as Super Junior or Topp Dogg doesn’t need them.

I do have to say that I’m not a big fan of even groups doing odd choreography because they end up hiding members for large sections — I think of U-Kiss with “Stop Girl” with Dongho tucked in the back for the chorus. But there are times when it can work: 2PM’s “Come Back When You Hear This Song” does a great job with this because they frequently change up the order so it’s not the same person in the back, and they stagger whoever is in the back so that you can still see him.

Gaya: I hate staggering so much! It’s probably because I like my symmetry and having that one person slightly off-centre drives me up the wall; not to mention the fact that the person behind looks like a creeper. It’s what throws me off ending poses as well, where you’ll have all the members in position and this one poor idol is stuck at the back making sure that they can be seen between the gap of two other member.

Sunny Hill‘s “Is The White Horse Coming?” springs to mind as an example of this, even though the rest of the choreography is pretty good for an even group. They use formations where every member can be seen (like the trapezium, and what I like to call the sine wave), and any ‘hiding’ caused by going into point formation is temporary. But, at the end of the song, you still end up with Jubi trying to body roll herself into position after the music has stopped.

I guess I don’t mind even-numbered groups doing point choreography so long as it’s not the same person always stuck at the back. Nine Muses‘ “Ticket” is a bit like a runway, with a different member walking up behind the last one. They also have a four-point rotation happening in the chorus, though I’ve seen this happen with odd-numbered groups as well (SNSD‘s “Gee”).

Leslie: Personally, I think the key to using even effectively is to make the stage dynamic with varying formations, no matter the size of the group. The four-point rotation Gaya mentioned is a great way to do this. Beast does this in a portion of their choreography for “Good Luck,” which helps to make up for the amount of time hiding a member during the chorus.

For smaller numbers, particularly duos, since background dancers are almost always involved, it shouldn’t be just the two of them dancing side by side with a row, staggered or not, of dancers behind them the whole time. Instead, they should use the background dancers to do more than just fill the stage but to actually incorporate them. DBSK does a great job of mixing this up — “Humanoids” comes to mind.

As for odd numbers, I think the focus on a single member makes a dynamic stage easier to achieve. Still, variation makes quite the difference to compound that dynamic. BTS does an excellent job in switching up their formations a lot. Their frequent and quick changes in “Boy in Luv” were actually what sold me as a fan.

You can really see the difference that odd vs. even makes in groups that have gone through member changes, such as T-ara. Just compare “Nine” and “Cry Cry” to see a change in the dynamics and formation. “Nine” uses the aforementioned sine wave plus the symmetry of two triangles, focused using direction they’re facing, while “Cry Cry” uses the more traditional center focus for the most part.

Now, we turn it to you. What do you think of odd vs. even? Do you think one is better? Why?