Sulli And Choiza Finally Confirmed To Be An Item 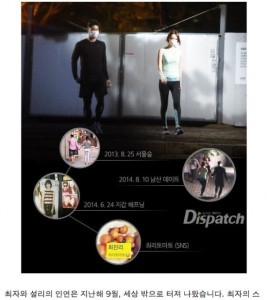 After f(x) fans were recently rocked with the news of Sulli going on an indefinite hiatus, it seems as though there is more than just ‘mental and physical exhaustion’ plaguing Sulli. Ever since Sulli went on a hiatus, Instagram photos from Choiza‘s cousin have been hinting at Sulli quite a bit of time together with Choiza. However, neither agencies have come up to confirm the rumours, even after the two were spotted on a date last year, and Choiza’s wallet was found with a picture of Sulli.

However, with the recent release of (the very hardworking) Dispatch‘s photos taken on August 10, it seems that the truth is no longer able to be kept under covers. Dispatch published photographs of Sulli and Choiza on a date at Namsan Tower to see the ‘Supermoon’ phenomena. Disguising themselves in only masks and without the requisite baseball hat, heading to such a public couple spot seems like an invitation for trouble.

After that, they apparently went to a drive-in theatre to catch a screening of Sulli’s movie, The Pirates — the movie that she failed to attend the premiere for, with Victoria supposedly turned up in support of her. After this pretty self-explanatory evidence, SM finally, finally ‘admitted’ to Sulli’s relationship, after a whole year of silence. While their statement was relatively vague, it’s probably as definite a confirmation we’re ever going to get from SM.

Sulli and Choiza are of the relationship in which the two depend on each other.

“Depend on each other”…Okayyy. Thankfully, Amoeba Culture soon followed with a press release to finally confirm everyone’s suspicions that Sulli and Choiza are indeed an item, with a much more explicit statement that the two are seeing each other with good feelings. Choiza himself also delivered a message through the agency:

I want to sincerely apologize for causing concern to many for not having been able to explain clearly despite the continuous speculations due to various personal circumstances. I thought that the solution was not to continue to remain silent as it shouldn’t have to be that my relationship with her becomes another source of pain for Sulli, who is already suffering from malicious rumours and comments. So far, we are in a stage where we have good feelings toward one another and are cautiously progressing forward, so I hope that you will all watch over us with interest. Thank you. 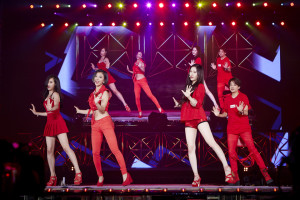 Not surprisingly, this revelation has not met with a positive response from netizens. Especially since both parties only chose now to confirm the relationship after denying it multiple times, it seems as somewhat of a half-assed move to appease the fans. Fans have already been annoyed at Sulli for supposedly disrupting f(x)’s “Red Light” promotions, and this anger is understandably exacerbated by proof of her enjoying herself on dates, at the expense of her member’s activities.

At the recent SM Town concert, f(x) performed as four, and this development makes it even more questionable if Sulli plans to continue in f(x). There’s perhaps more than meets the eye, as to what instigated this extended absence from Sulli. Possible conflict between Sulli and SM? But SM has come out to affirm that Sulli will not be leaving f(x), although we are all aware of how ‘honest’ SM is.

What are your thoughts on this development?